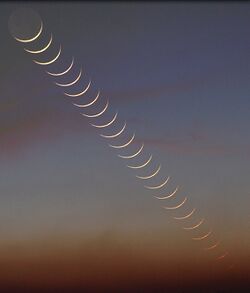 The moonset of the first Day of lunar month

A remarkable amount of obligatory acts of worship such as hajj and fasting, and many recommended rituals which are specific to a certain timing, as well as some legal issues such as increasing diya (blood-money) in the haram months depend on the moon sighting of the beginning of the month. Therefore, the ways of proving the beginning of a lunar month are discussed in the jurisprudential books. The importance of this issue is more in the month of Ramadan and becomes more sensitive especially in determining the end of this month so that if the month of Ramadan is twenty-nine days, the next day after the last day would be Eid al-Fitr when fasting would be forbidden, otherwise, it would the thirtieth of the month of Ramadan and fasting is obligatory.

This sensitivity and doubt existed in the past as well and hadiths are transmitted from Imams (a) which well show these conditions; however, in the more recent years, with the expansion of communications, sighting or not sighting the moon in different cities and even countries has increased this doubt and perplexity so much that even in one city, two different days have been announced as the Eid al-Fitr.

In verse 189 of Qur'an 2, moon sighting and its importance in religious rulings are mentioned, "They question you concerning the new moons. Say, 'They are timekeeping signs for the people and [for the sake of] hajj." In volume ten of Wasa'il al-Shi'a, the chapter of "Abwab ahkam shahr Ramadan" (issues regarding the rulings of the month of Ramadan), more than a hundred hadiths are mentioned about the details of sighting the crescent of the new moon.

Ways of Determining the Beginning of the Month

According to Shi'a jurisprudence, the beginning of a lunar month can be determined in one of the ways below:

The beginning point for determining the age of the crescent is the moment of simultaneity of the moon and the sun (new moon).[1] Upon the simultaneity of the moon with the sun, the part of the moon which faces the earth is obscure and is not visible and "goes on the wane" in astronomical terminology. When the moon goes out of the wane (i.e. obscurity), it should be seen as a slender crescent, but the crescent is too narrow to be sighted. With the movement of the moon and going away from the sun, the moon becomes visible as a crescent.

The duration of time from when the moon moves until it becomes visible is called "taht al-shu'a'" (literally "under the beam"). Astronomically, the duration of obscurity plus "taht al-shu'a'" takes about forty hours and forty-eight minutes. On the other hand, turning the moon around the earth does not always fit on the circle of zodiac[2] and this variation influences the moon sighting. The possibility of sighting the moon and thus the announcement of the beginning of a lunar month in (geographically) western countries is more than in eastern countries.

Height of the Crescent

Vespertine crescents set below the horizon after the sunset. The duration of time between the sunset and the moonset is called the "duration of pause". The more is the duration of the pause, the longer the moon will be in the sky, the sky becomes darker and the possibility of the sighting increases. Duration of the pause of narrower crescents is less than one hour and in some cases, less than 40 minutes. Usually, such crescents cannot be sighted after the sunset and the observer has to wait until the appropriate time comes.

Thickness of the Middle Section

One of the expressions used regarding the crescent is the thickness of its middle section. The more this thickness is, the more the possibility of moon sighting will be.

The thickness of the crescent in the second or third nights cannot be evidence for the wrong beginning of the month, because the orbit of the moon around the earth is oval, and depending on where the moon is on its orbit at the present time, it goes away from the sun and its bright part thickens.

Since vespertine crescents are seen after the sunset, the later the sun goes down the age and angular separation of the crescent increases. Therefore, the more we go toward western areas, the better the conditions of sighting the crescent will be.

Distance between the Moon and the Earth

Reasons for Difficulty of Sighting the New Moon

Records of the Moon Sighting and their Usages

In the evening of August 18, 2001, Alireza Movahhednejad managed to sight the crescent of the month of Jumada l-Thani, 1422 AH (August 2001) by a 40*150 binocular. The age of the moon at that time was 12 hours and 15 minutes and its angular separation from the sun was 7.6 degrees. This way, the record of the moon sighting was set for Iran. The next year, Mohsen Qazi Mirsa'id managed to sight the very young crescent of the month of Rajab, 1423 (September 2002) at the age of 11 hours and 40 minutes and set a new record by his name.

Difference of the Criteria between Different Countries

Some countries do not have any certain criteria and follow the announcement of the beginning of the month by other countries:

A committee Ayatollah Khamenei established to organize the moon sighting. In 2001, the crescent of Jumada II, 1422 AH (August 2001) was in a position that if Iranian astronomers managed to sight it, several scientific world records regarding the moon sighting would be set for Iran. With the support of the moon sighting committee, a great preparation was made for this sighting and with the success, in that case, sighting groups for moon sighting were established for all months. In certain cases, such as the end of the month of Ramadan, up to 150 groups equipped with advanced optic binoculars around Iran are formed to sight the moon, some of which perform it using airplanes. Every month, this committee announces the reports of its sightings.

Sharia Ruler and the Verdict for Confirmation of the Moon Sighting

One of the ways to confirm the sighting of the moon is the verdict of the Sharia ruler. Although some jurists have accepted this, some have not and have mentioned reasons for invalidity of the verdict of the religious ruler in this issue. According to al-Bahrani, al-Shahid al-Awwal believed that accepting the verdict of the ruler regarding the confirmation of the sighting of the moon is better than refusing it, because the majority of the reasons suggest that if the ruler gives a verdict based on his knowledge which may have acquired from two just witnesses, it is obligatory to refer to his verdict. Al-Fadil al-Khurasani too agreed with al-Shahid al-Awwal, but al-'Allama al-Bahrani also mentioned the possibility of the invalidity of his verdict and mentioned Imam al-Sadiq's (a) statement as his justification, where Imam (a) said, "Regarding the moon sighting, I only permit the testimonies of two just men."