Procession of Arbaʿīn (Arabic: مسيرة الأربعين) is a great march of Shi'as in Iraq from different parts of the country towards Karbala on the occasion of Arba'in to pay a visit to the shrine of Imam al-Husayn (a) and perform ziyarat al-Arba'in.

Millions of people participate in this annual procession. Many people from other countries travel to attend this procession as well.

Enjoining the Ziyara of Arba'in 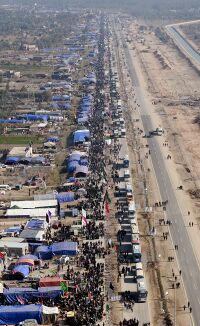 A glance at Procession of Arba'in

In a hadith from Imam al-Hasan al-Askari (a), the faithful are said to have five signs and attributes. One of those signs is ziyarat al-Arba'in.[1]

There is also a ziyara narrated for the day of Arba'in from Imam al-Sadiq (a).[2] Shaykh Abbas Qummi mentioned it with the title of ziyarat al-Arba'in in the third chapter of his Mafatih al-jinan.[3]

Qadi Tabataba'i wrote that procession towards Karbala on the day of Arba'in has been common among Shiites since the time of the Infallible Imams (a) and Shiites practiced this tradition even at the times of Umayyads and Abbasids. He considered this action permanent conduct of Shi'a during history.[4]

The author of Adab al-Taff, published in 1388/1967, reported the gathering of Shiites in Arba'in in Karbala and likened it to the gathering of Muslims in Mecca and mentioned the attendance of groups of mourners who recited poems in Turkish, Arabic, Persian, and Urdu. He said that it would not be exaggerating saying that more than a million people attended the pilgrimage of Arba'in at that time.[5]

Saddam's Government and Ban on Procession

Toward the end of the fourteenth century/twentieth century, Ba'ath party of Iraq opposed procession of Arba'in and sometimes treated those who went on procession harshly which withered this ritual on the vine. In a period, Ayatollah al-Sayyid Muhammad al-Sadr declared procession toward Karbala obligatory.[6]

Ba'ath party limited holding religious rituals, and also setting up any mawkib[7] as well as the procession toward Karbala were banned.[8] However, on Safar 15th, 1398/1977, people of Najaf prepared for procession of Arba'in.[9] Thirty thousand people moved toward Karbala. Government forces first opposed this movement and some people were martyred. Finally, in the path of Najaf toward Karbala, army forces attacked people and arrested thousands of people.[10] Some people were killed, some were executed and some others received life sentences. Al-Sayyid Muhammad Baqir al-Sadr and al-Sayyid Muhammad Baqir al-Hakim played key roles in this uprising.[11] Imam Khomeini approved this uprising of people too.[12]

After the fall of the Ba'th regime in Iraq which banned any mourning ceremony, Shiites moved towards Karbala for the first time in 2003.[13] In the first years of the procession, they were only two or three million people. In the next years, the number of pilgrims reached more than ten million people.

In 2013, some reports mentioned the number of fifteen million pilgrims attending Karbala.

Iraq's Ministry of Interior gave the statistics showing that in 2013, at least one million and three hundred thousand foreign pilgrims came from Arabic and Islamic countries as well as from among Muslim minorities in European countries to Iraq, and all of them moved towards Karbala to attend the ceremonies and renew their allegiance with Imam al-Husayn (a).

Distance of the Procession

Iraqi pilgrims move toward Karbala from their cities. But many Iranian pilgrims choose the path between Najaf to Karbala for their procession. The distance between the two cities is about eighty kilometers. There are 1452 marked utility poles between Najaf and Karbala, and the distance between every two poles is fifty meters. About twenty to twenty-five hours is needed for the whole walking. The best time for beginning the procession is Safar 16th.