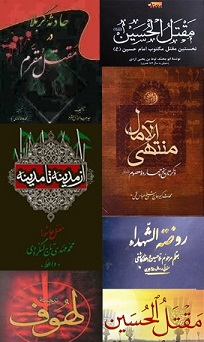 Maqtal (Arabic: المقتل) is a written account containing historical monographs and narrations about the murder or martyrdom of a notable personality in history. Writing maqtal among Shi'a is mostly for describing the martyrdom of infallible Imams (a) and notable Shi'a personalities. Over time and due to the prevalence of such works about the Tragedy of Karbala, this term became exclusively used for narrating the events related with the martyrdom of Imam al-Husayn (a) and his companions.

The lexical meaning of maqtal (مقتل) is "the place of killing or murder". In historical studies, any written account which contains reports about murder or martyrdom of a notable personality in history is called maqtal.[1]

Maqtal is the result of writing history based on monography. Monography of events is a kind of historical writing used in recording important events. Such writings are usually about recording the events in adventurous and historical days and narrating them chronologically with all the details.[2] 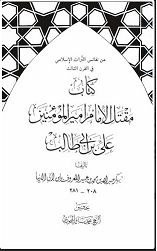 In the course of Shia historiography, first maqtals are mostly writings about the martyrdom of Imam 'Ali (a).[3] Some sources have mentioned fourteen maqtals, all titled as "Maqtal Amir al-Mu'minin (a)" written by scholars such as Abu l-Hasan al-Bakri, Jabir al-Ju'fi, Shaykh Yahya Bahrani Yazdi and Ibn Abi Dunya.[4]

Many maqtals written by Shia are about Imam al-Hasan (a) and Imam al-Husayn (a). Although today, only a name remained of earlier works in indexes with the title of maqtal al-Husayn (a), or parts of them have been sparsely mentioned in recent works.[5]

Also, some maqtals are dedicated to the description of the death of people other than the Ahl al-Bayt (a) such as Maqtal Umar b. al-Khattab written by Muhammad b. Abd Allah b. Mihran,[6] Maqtal awlad Muslim written by Shaykh Husayn Usfuri, Maqtal Abd Allah b. al-Zubayr and Maqtal Hujr b. Adi written by Abu Mikhnaf and two other maqtals with the same name written by Nasr b. Muzahim al-Kufi and Hisham al-Kalbi, maqtal Rashid wa Maytham wa Juwayriyya b. Musahhar written by Hisham al-Kalbi, maqtal Zayd al-Shahid wa Tawarikhuh written by Muhammad Ali Sayyid Hibat al-Din Shahristani, maqtal Muhammad b. Abi Bakr written by 'Abd al-'Aziz Jaludi, which are all in Arabic, maqtal Sadat written by Abu l-Qalam al-Mawlawi Saghir Hasan known as Shams al-Hindi in two parts in Urdu and the maqtal nama written by Nasir al-Din in Persian.[7]

Maqtals of Imam al-Husayn (a)

According to the famous opinion, Maqtal Abi 'Abd Allah al-Husayn (a) written by Asbagh b. Nubata al-Mujashi'i is the oldest work among maqtals about the martyrdom of Imam al-Husayn (a).[8] According to a news, al-Shaykh al-Saduq narrated, Asbagh b. Nubata has seen or heard about the martyrdom of Imam al-Husayn (a),[9] however, there is no historical report about the Event of Ashura narrated from him, and the narrator of some of these reports has been his son, Qasim. It seems that he has had a book of maqtal.[10]

Between the 2nd/8th and 7th/13th centuries, written works about Ashura increased in number and then decreased and no important work was published then and even if there has been any, nothing has remained now.[11] However, during this period, reports of some writers such as Sayyid Muhammad b. Abi Talib Husayni Musawi (d. 10th/16th century) in Tasliyat al-majalis wa zinat al-majalis, 'Allama al-Majlisi in Bihar al-anwar and 'Abd Allah Bahrani (d. 1130/1718) in Maqtal al-Imam al-Husayn (a) are noteworthy and are very special.

Researchers consider the works after the 7th century adopted from earlier reports mixed with unauthentic reports. Among these works, some writings have had great roles in deviation of the events of Ashura.[12] Rawdat al-Shuhada written by Mulla Husayn Kashifi (d. 910/1504-5) in the early 10th/16th century in Harat is among such works.[13]

According to researchers of Islamic history, after Safavids took power, the ceremonies of 'Ashura were promoted to a more official position and new texts in maqtal were written in which accurate references were not used and the Event of Ashura was viewed from the angle of grief, tragedy and trial before any intention for compiling authentic historical texts and they primarily intended to write a tragic work to recite in Rawda. Most of these works are written for mourning ceremonies and their major goal has been for crying. Works such as Ibtila' al-awliya, Izalat al-awham fi al-buka', Iksir al-'ibada fi asrar al-shahda, and Muhriq al-qulub are among the mentioned works.[14]

According to researchers in Islamic history, when the Events of Karbala are reviewed in the available maqtals, five works can be trusted which belong to 2nd/8th century until the early 4th/10th century and what has been written in later centuries, except for the content which has been somehow derived from those five works and needs to be checked, would be difficult to be considered as primary sources. The mentioned five authentic works are:

Sources of Maqtals of Ashura

Among the sources on which the maqtals depended are the following:

Some famous maqtals of Imam al-Husayn (a) and their authors follow in chronological order:[17]

Writing Maqtals about the event of Karbala continues in recent centuries with the difference that in the 14th century AH, in addition to emotional approaches which are most tragic and painful, the authors also mentioned political approaches and fighting with tyranny are about the uprising of Imam al-Husayn (a). Written works in this century can be considered influenced by the conditions of the Shi'a community, especially movements seeking justice and religious free-mindedness.[18]

In 15th century AH, besides mentioning the events of that period, written works about 'Ashura also discussed theoretical and analytical issues such as philosophy and goals or secrets of the uprising of Imam al-Husayn (a).[19]