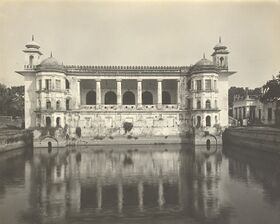 An old photo from Hussaini Dalan taken in 1904

Hussainī Dālān (Bengali:হোসেনী দালান) is a Shiite visiting place and Imambara in the old city of Dhaka in Bangladesh. It dates back to the late period of the Gurkani dynasty (17 centuries). The general structure of the building is modeled after Imam al-Husayn's (a) mausoleum and Ta'ziya. Every year in the first ten days of the Muharram month, it turns into the most hectic place in the city. The building was apparently constructed in the middle of the 11th/17th century by a person called "Mir Murad," who was the town's sheriff and in charge of constructing public buildings in the strip of the area. However, according to Radawi, in the 10th/16th and 11th/17th centuries, the Shi'as secretly held mourning ceremonies of Muharram in their houses. The title "Hussaini Dalan" was given to the building early in the 12th/18th century during the reign of Murshid Quli Khan, and the building turned into a center for the ceremonies of the Muharram month in Bengal. The present building of Hussaini Dalan was constructed over the previous smaller house of ta'ziya. Nawab Nusrat Jung reconstructed the building in the middle of the 12th/18th century. The East India Company renovated the building once in 1222/1807-8 and once again in 1225/1810-1. After the 1315/1897-8 earthquake, as a result of which part of the building, including its ceiling, was damaged, Nawab Ihsan Allah Bahadur reconstructed and repaired the building. The building was modeled after Imam al-Husayn's (a) mausoleum and "Ta'ziya." In the Indian Subcontinent, "Ta'ziya" refers to a symbolic coffin and darih of Imam al-Husayn (a). It is a small decorated chamber made of wood or metal.

The current architecture of Hussaini Dalan is mostly similar to modern western architecture, particularly because of the four huge pillars in front of its patio, which were built during its last reconstructions in the 13th/19th century. However, elements of Mogul and local architectures can also be observed in the building, especially in the parts remaining from the original construction.

Hussaini Dalan is located on a high portico overlooking a big pool. On its eastern wing, there is a stairway, and on its southern wing, there are two towers with domes on them.

The building has two halls, one inside the other: the first one is directed to the south and is called "Shirnay"; it is fully black and is appropriate for mourning ceremonies. The other one is directed to the north and is called "Khutba"; it has a 7-step minbar. Sacred symbols such as Khamsa and the image of Imam al-Hasan (a) and Imam al-Husayn (a) are held in this hall. There are two sub-halls on two floors, one on the left and the other on the right wing of the building. It seems that the two sub-halls were reserved for ladies.

Hussaini Dalan in the month of Muharram

In the first decade of the month of Muharram, Hussaini Dalan turns into the most hectic place in town. Mourning processions come and go in Imambara. They move their 'Alam on their shoulders and take it out of the town with moaning and bury it one parasang away from town.

To view panoramic 360° photos from inside the building, visit here.