ʿAlqama (Arabic: علقمة) or ʿAlqamī (Arabic: علقمی) was a stream in Karbala near which al-'Abbas b. 'Ali (a) was martyred on the Day of Ashura. The stream is forked from Euphrates to Karbala and its surroundings.

The grandfather of Ibn 'Alqami, the last 'Abbasid minister, who was from the Banu Asad tribe in the city of Nil in Iraq, made a creek near the Euphrates; this creek is named after him.

In the Literature of 'Ashura

The 'Alqama creek is associated with Abu l-Fadl al-'Abbas (a)'s amputated hands and the thirst in the Event of Karbala in Persian literature on Ashura. The following poem is a case in point:(translated from Persian)

Sleep was removed from the eyes of dawn

Rosewater was removed from the spring of flower

Slowly on their shoulders, the angels

removed the spirit of water from 'Alqama 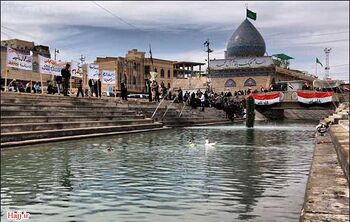 'Alqama creek, near Maqam of Imam al-Mahdi (a) in Karbala, Iraq

It is not known where in today's Karbala, 'Alqama is located. Within the last 1000 years, there was so much construction and destruction in Karbala that it cannot be identified where Abu l-Fadl al-'Abbas (a) tried to get water from. The water streaming presently on the way to Imam al-Sadiq (a)'s garden, near Imam al-Mahdi's (a) standing place is called "Nahr al-Husayni", forking from the Euphrates in a district called "al-Husayni" 15 kilometers from Karbala. It supplies water to farms. Presently, because of the growth of the population and the high consumption of water in Karbala and the rising level of underground water, the sewage of hotels and houses has prevailed the creek. So it supplies water to farms or goes back to the Euphrates.