From wikishia
For other usages, see Tasbih (disambiguation).

Tasbiḥ (Arabic: تسبیح) means praising God as exalted and pure from all imperfections. Any vocal dhikr containing such praise is also called tasbih.

The best time for saying tasbih is before sunrise and sunset, and the most common formula for it is "subhanallah" (Arabic: سبحان الله, Glory be to Allah).

Tasbih of Lady Fatima (a) is one of the most famous types of tasbih in Shiism, and emphasized in several Sunni and Shi'i hadiths.

Seven suras of the Qur'an begin with tasbih, and so they are known as musabbihat.

Tasbih is an Arabic infinitive derived from the word "subhan" (Arabic: سبحان) which means "exalted". In Islamic context, tasbih means exaltation of God from every kind of weakness and need.[1]

Tasbih and its paronyms are repeated ninety times in Qur'an. Among them, the word "subhan" is the most used word. Most of these words mean glorifying and exalting God.

Sometimes tasbih come together with praise (hamd) in Qur'an, such as praise of angles, thunder, and etc.[2] Exegetes of Qur'an believe that this implies that creatures cannot say tasbih by themselves, so they should praise God for his kindness for letting them say tasbih.[3].

According to Qur'an, God Himself is the first who does tasbih[4], after Him the ones who are with Him[5]. Also angels say tasbih with "hamd[6] or without it[7]; it is mostly interpreted as prayer[8].

In Qur'an's view, all of existence[9] including mountains and birds[10], heavens, sun, moon, stars, living things, and most of people are saying tasbih[11].[12]

Some verses of Qur'an encourage to say tasbih in each morning and evening[13][14], this shows that tasbih could be done all times.

In other verses, it is commanded to tasbih in some special times, like before sunrise and sunset[15], midnight[16], in duration of night and day[17], and after sajda[18]. Among them tasbih is specially emphasized in sunrise and sunset, so in time of alteration of day and night which matches the concept of passing and exaltation. Some believe that it means prayer which is the best type of tasbih[19].

The most obvious type of tasbih is saying "subhan Allah" (Arabic: سبحان الله, exalted be Allah)

Dhikr of Ruku' and Sajda

In Islamic tradition, usually tasbih means dhikr of "subhan Allah"; but in its extended usage this term includes other dhikrs such as "Allah-u akbar" (Arabic: أللهُ أکبر, Allah is greater) (takbir), "la ilah-a illa Allah" (Arabic: لا إِلهَ إلّا الله, there's no god except Allah) (tahlil), and "al-hamd-u li-Allah" (Arabic: ألحَمدُ لله, the praise is for Allah) (tahmid). "Tasbihat al-arba'a" which is one of mandatory recites of prayer, consists of these four dhikrs[20].

Tasbih of Lady Fatima (a) 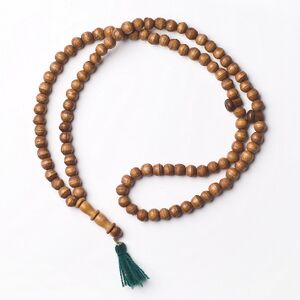 Some hadiths extended the concept of tasbih. They consider scientific conversation, and, with emphasis, mournful sighing for oppression to Ahl al-Bayt as tasbih[22].

In Farsi language, a string of beads made of clay, stone, wood, plastic, etc. is also tasbih which is held in hand for counting dhikr or doing istikhara.

Misbaha usually consists of 101 beads in three parts of 33 beads. These parts are separated by two beads with different shapes than others. The number of beads and their partition is for compliance with tasbih of Lady Fatima (a).

Suras of al-Saff, al-A'la, al-Hadid, al-Jumu'a, al-Taghabun, al-Hashr, and al-Isra' begin with tasbih, so they are known as musabbihat[23].