From wikishia
(Redirected from Al-Kafi)

Al-Kāfī (Arabic: الکافي, the Sufficient) is a collection of hadith of the Twelver Shi'a. It is the most important and authentic collection among the Four Books. It was compiled by thiqat al-Islam al-Kulayni (d. 329/941) in the period of the Minor Occultation. Al-Kafi consists of three parts: Usul (principles), Furu' (branches), and Rawda (miscellaneous issues); Usul is the most important part. Al-Kulayni tried to collect hadiths in such a way that they agree with the consensus and there is no incompatibility between them and the Qur'an.

Al-Kafi may have been entitled as such due to al-Kulayni's own statement in the chapter on Tahara, which reads, "This book is "Kafi" (i.e. sufficient) for all religious sciences"[1].

It also could have been named Al-Kafi due to a report that when it was presented to Imam al-Mahdi (a), he said, "Al-Kafi is Kafi (i.e. sufficient) for our Shi'a." [2] However, there is no such a report and it is just a claim.

In the Words of Great Scholars

Al-Shaykh al-Mufid says, "This book is among the best Shi'a books and enjoys a lot of benefits."[3]

Al-Shahid al-Awwal introduces it as a book of hadith similar to which has not been written by any Shi'a scholar.[4]

Muhammad Taqi al-Majlisi writes, "Al-Kafi is the most accurate and most comprehensive of all primary hadith sources, and it is the greatest and best book ever written by the Imamiyyah."[5]

Agha Buzurg Tihrani says, "Al-Kafi is a book of hadiths reported from Ahl al-Bayt (a) to which no similar book has been authored."[6]

Al-Astarabadi quotes from his teachers that, "No book has ever been written similar nor close to it in rank".[7]

Ayatollah Khoei mentions that his teacher, Muhammad Husayn Na'ini, would call doubting the sources of al-Kafi, "the business of the incompetent".[8]

According to the preface of al-Kafi, al-Kulayni has written this book in response to a person he calls, "a brother in religion":

O brother! You asked why people have to be ignorant and blindly religious; because they are religious due to habit and imitation of their fathers…
You reminded that you have difficulty in some matters and do not understand the truth in them due to incompatibility of hadith… and that you do not have access to any trustworthy scholar about which you can speak about. You said that you want to have a book addressing all religious sciences to suffice the learner and be the reference for the seeker [of truth]… You said that you hope God Almighty assists our fellows in this school of religion and takes them to their leaders.
Praise be to God who made writing of the requested book possible and I hope it would be as that you requested."[9]

Al-Kulayni states in his introduction that he has collected hadith in such a way that they agree with the consensus and there is no incompatibility between them and the Qur'an. Furthermore, when he saw no preference between two incompatible hadiths, he chose the one he deemed more correct and authentic.[10]

At the time of writing al-Kafi, al-Kulayni used 'The four hundred hadith booklets' written by the companions of the Ahl al-Bayt (a), known as Usul arba'a mi'a. He met with those companions of the Ahl al-Bayt (a) - or those who had seen them - to collect the hadith which had the shortest chain of transmission. Being contemporary with the Four Deputies paved the way for him to best verify these hadiths. However, about the last part of this statement it should be said that it was not common to present hadith books to Ahl al-Bayt (a) and the number of books presented is very small compared to the number of books which has not been presented. Furthermore, al-Kulayni had no special connection with the Four Deputies.

An important feature of al-Kafi is its order and comprehensiveness.[11] Al-Kafi is also known for its large number of hadiths, clear classification of hadith, completeness in chains of transmitters, and coverage of various topics in theology, jurisprudence, ethics, etc.

Al-Kulayni has tried to bring the most detailed, authentic and clear hadith at the beginning of each section, and the more concise and ambiguous ones later.[12]

Comparison with Other Collections of Hadiths

Al-Kafi consists of three main sections: usul al-kafi, which contains hadiths regarding beliefs, furu' al-kafi which contains fiqhi hadiths and rawda which is about history. Usul al-kafi contains a few books in itself including Kitab al-Hujja.

Furu' al-Kafi contains hadiths regarding jurisprudential rulings and is comprised of 26 chapters:

Rawda al-Kafi consists of miscellaneous hadiths that are in no particular order. Although some do not consider it to be a part of al-Kafi,[13] both al-Najashi and al-Shaykh al-Tusi have asserted that Rawda is al-Kafi's last chapter.[14] It includes hadiths pertaining to the following topics:

Yusuf al-Bahrani, in Lu'lu' al-bahrayn, counts the number of hadiths in al-Kafi to be 16,199, Dr. Husayn 'Ali Mahfuz, in the preface to al-Kafi, counts 15,176, al-Allama al-Majlisi counts 16,121 and some contemporary scholars such as al-Shaykh 'Abd al-Rassul al-Ghaffar consider them to be 15,503.

The reason for this variance in number is due to different methods of counting. For example, some scholars count a hadith transmitted from two different chains as two hadiths, while others count it as one. Also, some have included Mursal hadiths (those hadith which do not have a complete chain of transmitters), while others have not. There are also rare cases where some hadiths are not mentioned in certain manuscripts, and therefore may or may not have been counted.[15]

Researches Carried Out on al-Kafi

Since al-Kafi has always been a topic of discussion among scholars of hadith, many researches have been carried out on it. In al-Dhari'a, Agha Buzurg Tihrani has listed 27 commentaries on Usul al-kafi or the whole of al-Kafi, and 10 marginal notes on al-Kafi.[16] 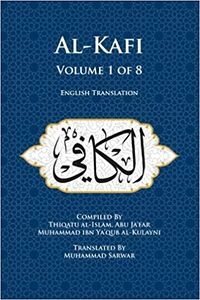 Translation of al-Kafi to English, by Muhammad Sarwar

Taqwa Media has published a translation and commentary by Islamic Texts Institute under direction of Rizwan Arastu. The first three chapters of al-Kafi are now available.[18]