Muḥammad Dānishzāda Qummī (Persian:محمد دانش‌زاده قمی) (b. 1357/1938- d. 1441/2019), known as Muḥammad Mu'min, was a Shi'a jurist of the fifteenth/twenty first century, a theorist of the Guardianship of the Jurist, one of the jurists in the Guardian Council, and a representative in the Assembly of Experts of the Leadership in Iran. Mu'min was one of the clergies who fought against the Pahlavi government, and since 1964 until his death, he was a member of the Society for Teachers of the Seminary of Qom. In 1975, in the period of Mohammad Reza Pahlavi's government, he lived in exile in Iran for three years: in Shahdad near Kerman and Tuyserkan.

After the victory of the Islamic Revolution of Iran, Mu'min played a crucial role in the formation of the Judiciary Council. He was a member of the Higher Judicial Council, a member of the Higher Council of the Islamic Seminary, a member of the Council for the Revision of the Constitution, and the head of the Seminary of Qom. He was one of the jurists in the Guardian Council and a representative in the Assembly of Experts for the Leadership in Iran. Mu'min wrote a number of books about the Islamic government. His most important work concerning the wilaya (or guardianship) of the Infallibles, as well as the Guardianship of the Jurist, is al-Hukuma al-islamiyya in three volumes.

Muhammad Mu'min was born on January 12, 1938, in Qom. His father Abbas Mu'min was a farmer. After studies in Maktabkhana and the school of religious teachings, he began to study in the Islamic seminary. In the first year of his study in the seminary, he also served as a teacher in order to make a living. His teachers in the Seminary of Qom included Imam Khomeini, Muhammad Husayn Tabataba'i, and Ali Mishkini. 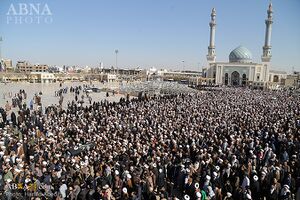 He died on February 21, 2019 after a period of illness. The funeral procession took place on Saturday, February 23, in Qom and after the funeral prayer led by Ayatollah Subhani, he was buried in the holy shrine of Lady Fatima al-Ma'suma (a).

Muhammad Mu'min began his seminary studies in 1952. He finished preliminary and intermediary levels of his studies within five years and then attended Imam Khomeini's advanced lectures of jurisprudence. He also attended the lectures of Muhaqqiq Damad, Murtada Ha'iri Yazdi, and Sayyid Muhammad Husayn Tabataba'i. After teaching al-Makasib and al-Rasa'il in jurisprudence and its principles, as well as Sharh al-Tajrid, Bidayat al-hikma, Nihayat al-hikma, al-Asfar, and al-Arshiyya in theology and philosophy, he began teaching advanced courses of the principles of jurisprudence since 1984 and advanced courses of jurisprudence since 1986. In the latter courses, he taught issues of transactions, judgeship, testimonies, hudud, and modern issues concerning government. In 1993, Muhammad Mu'min and a number of other scholars were appointed by Ayatollah Khamenei as members of a group for the examination of new jurisprudential issues. Muhammad Mu'min was also a member of a group who discussed jurisprudential issues with Ayatollah Khamenei. Mu'min recounts some of these issues in his Kalimat Sadida.

After Imam Khomeini's exile, Muhammad Mu'min went to Najaf in 1964 and stayed there for six months. During Imam Khomeini's stay in Najaf, Mu'min frequently went there and attended the lectures of Imam Khomeini as well as Sayyid Abu l-Qasim al-Khoei, Husayn Hilli, Sayyid Mahmud Shahrudi, and f or a short time, in Sayyid Muhsin al-Hakim's lectures.

Before the Islamic Revolution of Iran, Muhammad Mu'min was a member of the Society for Teachers of the Seminary of Qom. In 1971, after the death of Sayyid Muhsin al-Hakim, the Society announced Imam Khomeini as a marja'. In Mordad 1973, SAVAK tried to arrest Mu'min, but to no avail. In Farvardin 1974, Mu'min was arrested, and then he was banished to Shahdad and Tuyserkan for three years.

After the Islamic Revolution

After the Islamic Revolution, Muhammad Mu'min played a crucial role in the formation of the Judiciary System. He cooperated with the system in the selection of judges, in the appeal court, and the Higher Judicial Council until 1983. After that, he served as a member of jurists of the Guardian Council. He was a representative in the Assembly of Experts for five terms. In addition to his governmental positions, he also served in the administration of Islamic seminaries.

The Guardian Council and the Assembly of Experts

The most important work by Muhammad Mu'min concerning political jurisprudence is al-Wilaya al-ilahiyya al-islamiyya aw al-hukuma al-islamiyya. According to Feirahi, his view is the most authoritarian account of the appointment and mandates of the jurist. His view is important because of his long-time membership in the Guardian Council and his impact on laws and decisions.

For Mu'min, all rulings are in the hand of the Jurist Guardian, and thus, other jurists do not have authority in the judiciary and government. In his view, the enforceability of the rule of the Infallible and the Guardianship of the jurist does not come from consultations, allegiances, and votes. To the contrary, elections derive their legitimacy from the ruler's views. Moreover, the legitimacy, dissolution, or continuation of the legislative assembly and all other institutes depend on the decision of the Supreme Leader. The core of the Islamic government is the Supreme Leader and these institutes only serve as "legislative helpers" of the jurist, rather than people's representatives. In fact, they follow the wills of the Jurist Guardian. Thus, in Mu'min's view, the rule of the jurist is unqualified, encompassing all places and all times.