From wikishia
(Redirected from Ascension)

Al-Miʿrāj (Arabic:المِعراج, lit. ascent) or al-Isrāʾ (Arabic:الإسراء) is the nightly journey of the Holy Prophet (s) from Mecca to al-Aqsa Mosque and from there to the skies. Both Shi'a and Sunni are unanimous regarding the happening of Mi'raj according to frequent verses and hadiths. Still, they disagree regarding the time, place, numbers, condition, and physical or spiritual nature. This event happened in the final years of the noble Prophet's (s) stay in Mecca. In Mi'raj, the Prophet (s) saw divine signs and met some great prophets' souls.

Literally, Mi'raj means ladder, stairs and anything by which one can ascend[1] while in usage it refers to the nightly journey of the Prophet (s) from Mecca to al-Aqsa Mosque and from there to the skies and reaching Sidrat al-Muntaha and the position of Divine Qab Qawsayn.[2]

In the Qur'an and Hadiths

According to al-Tabrisi, Mi'raj of the Prophet (s) is among the issues that Shi'a, Sunni, verses along with frequent hadiths support.[3] The story of Mi'raj has been mentioned in Qur'an 17 and Qur'an 53.[4]

There are discrepancies among narrations regarding the exact year and whether it was before the demise of Abu Talib or after it.[5] According to 'Allama Tabataba'i the famous report is that the nightly journey of the Prophet (s) happened in the final years of his stay in Mecca (before the Hijra).[6] Ja'far Subhani maintain that the journey was after 10th of Bi'tha and it cannot be before that.[7] Mulla Fath Allah Kashani and Ahmad b. 'Ali al-Tabrisi also believe that the most famous viewpoint is that Mi'raj happened in 12th after Bi'tha (=2 BH).[8] 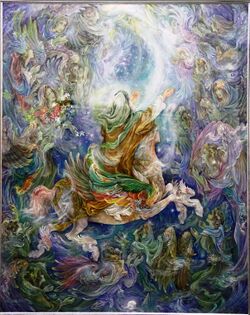 Prophet's (s) Mi'raj, a masterpiece painted by Mahmud Farshchian, the master of Iranian painting and miniatures.

From the two words of "layl" (Arabic: لیلاً, by night) and "asra" (Arabic: أسری, carried on a journey) in the first verse of Qur'an 17 (Sura al-Isra'), it can be understood that this journey happened at night.[9] But in the narrations, it is referred to with many differences as in which night it took place. In most cases, it has been narrated to have happened in one of the following nights:

The time it took for the Prophet (s) to go to Jerusalem and al-Aqsa Mosque and to the skies and his return, did not last longer than one night and the next morning the Prophet (s) was in Mecca.[14] It is been cited in Tafsir al-'Ayashi that Imam al-Sadiq (a) said, "The Prophet (s) performed the prayers of 'Isha and Fajr in Mecca."[15] This means that Isra' and Mi'raj happened between the two.

There are differences among narrations about the detail of the Prophet's (s) Mi'raj and whether its beginning and the end of it was the house of Umm Hani, al-Masjid al-Haram or Shi'b Abi Talib.[16] But it is famously said that in that night, the Prophet (s) was in the house of Umm Hani, daughter of Abi Talib and from there went to Mi'raj and returned there at the end.[17]

To explain why the Qur'an has mentioned al-Masjid al-Haram as the departure of this journey, it is said that Arabs call all Mecca the sanctuary of God; therefore, all of it was assumed as mosque and sanctuary of God and the house of Umm Hani was in the sanctuary. Also, some narrations' content does not agree with the occurrence of Mi'raj in Shi'b Abi Talib.[18]

According to some narrations, the Prophet (s) went to Mi'raj more than just once.[19] 'Allama Tabataba'i regarded one of them from al-Masjid al-Haram and another from the house of Umm Hani and said that the first verses of the Qur'an 53 approves this. Also, different opinions regarding the place, time and other details of Mi'raj can be justified through this theory.[20]

Description of the Journey

In that night, archangel Gabriel came to the Prophet (s) and brought him a conveyance called Buraq and the Prophet (s) got on and moved toward Jerusalem.[21] At the time of mounting on Buraq, it began to show disobedience and Gabriel hit it and told it, "Be calm o Buraq! Previously no prophet has ever mounted on you and in the future, no one like him would ever ride you." After that hit, Buraq was calm and took him up which was not so high while Gabriel was with him.

In the middle of the way, the Prophet (s) stopped in Medina, mosque of Kufa, Tur Sina and Bethlehem which is the birthplace of Prophet Jesus (a) and prayed there. He (s) then entered al-Aqsa Mosque and prayed there too.[22]

Sky of the World

Speaking with the Prophet Adam (a)

From there, the Prophet (s) ascended to the sky of this world and saw Prophet Adam (a) there. Then, angels came to welcome him in groups and greeted him smiling and congratulated him. The Prophet (s) saw an angel there having a frowning and angry look and greeting him (s), not smiling like others. When the Prophet (s) asked the name of that angel from Gabriel, he answered that "this is Malik, guard of the hell and has never smiled and his wrath on the enemies of God and sinners is being increased incessantly." The Prophet (s) then asked Gabriel to show him the hell, and when he opened its cap, a flame rose out of it which filled the air.[23]

There, the Prophet (s) also met 'Izra'il (Azrael or Malak al-Mawt, the Archangel of Death) who was holding a tablet of light in his hand and after he had a conversation with the Prophet (s), said, "all the world in my hand is like a coin in the hand of a man and he flips it. There is no house except I meet five times a day…" That was when the Prophet (s) said, "Indeed, death is the greatest of calamity and the harshest of event." And then Gabriel said, "the events following death are worse than that."[24]

The Prophet (s) then went to the seventh sky and reached where Gabriel was unable to reach saying, "I do not have permission to go there, and if I approach it as much as a tip of a finger, my wings and feather will burn."[26]

On return, the Prophet (s) landed in Jerusalem and went toward Mecca. On his way to Mecca, he (s) encountered a trade caravan of Quraysh who had lost a camel and were searching for it. The Prophet (s) drank from the water they had in a bowl and poured the rest of it on the ground[27] and according to a report, covered the bowl's cap. He (s) landed in the house of Umm Hani before sunrise,[28] and told her his secret for the first time and then in the daytime, disclosed his secret to the gatherings of Quraysh.[29]

On the night of Mi'raj, a conversation was made between the Prophet (s) and God in the form of a divine hadith which became famous as the hadith of Mi'raj.

The story of Mi'raj seemed to be impossible for Quraysh and made their chiefs angry the most. They denied the Prophet (s) and said, "There are people in Mecca who have seen Jerusalem; to prove it, describe the building!" The Prophet (s) not only described the buildings of Jerusalem but also reported the events on the way between Mecca and Jerusalem and said that in the middle of the way, I encountered a caravan from a tribe who had lost a camel and had a bowl full of water in their goods from which I drank and then covered it. Also, I encountered a group camel of whom had escaped and had broken a leg." Quraysh said, "Report on the caravan of Quraysh." The Prophet (s) said, "I saw them in Tan'im as a grey camel was walking ahead of them, carrying a palanquin on its back. They must enter Mecca now. Quraysh became very angry at such definite news and said, "We will see the truth or lies of his word now." Soon, a caravan entered the city and Abu Sufyan and the passengers approved the details of the Prophet's (s) report.[30]

Most exegetes believe that the Prophet (s) went to Jerusalem and from there to skies with his body and soul. But, Khawarij denied it and also Jahmiyya and Shaykhiyya believed it happened spiritually only.[31] According to some narrations, when the Prophet (s) arrived in Bayt al-Ma'mur and near Sidrat al-Muntaha, some of his companions accompanied him.[32]

On the night of Mi'raj, he (s) saw some great signs of God. There are some reports on what the Prophet (s) saw in the skies, dwellers of paradise, the hell and angels.

According to narrations reported by al-Shaykh al-Saduq and others, one of the places the Prophet (s) saw traveling above the earth was the land of Qom which glittered as a spot and when asked Gabriel about that spot, he answered, "It is the land of Qom, where believing servants and the followers of your household will gather and wait for deliverance and will endure hardships and grief."[33]

The Prophet (s) also met the souls of some great prophets including Adam (a), Abraham (a), Moses (a) and Jesus (a) and led their prayer.[34]

Position of Mi'raj in Literature and Art

Nizami's Khamsas are among the most important books which have depicted pictures from the Prophet's (s) Mi'raj at the time of Timurids and periods contemporary with them.

One of the most famous works of painting at the time of Safavids is a Khamsa of Nizami belonging to the time of Shah Tahmasb which is a drawing of the famous scene of the Prophet's (s) Mi'raj painted by Sultan Muhammad. Together with three other works attributed to him, this work is placed in the illuminated manuscript of Nizami's Khamsa ordered by Shah Tahmasb Safavi and its painting and calligraphy have been made between 942/1535-6 and 947/1540-1. Its calligrapher has been Shah Mahmud Nayshaburi, the famous calligrapher of the tenth/sixteenth century. In this work, the picture of the Prophet (s) whose face has been covered with a white mask is depicted riding Buraq among the great crowd of angelic creatures with 15 angels and Gabriel is guiding him flying ahead of Buraq.

This work is painted in the size of 101 * 81.5 cm. Besides the picture of the Prophet (s), angels are in the state of supplication. In this painting which depicts the night of Mi'raj, a force can be seen which draws the hand of the Prophet (s) towards God and the higher we look, the more angels fade in the Divine Essence of God.