In 7/629 when the Prophet (s) along with other Muslims set out to perform 'Umrat al-Qada' in Mecca,[8] Maymuna was amazed by the magnitude of Muslims and liked the Prophet (s).[9] She consulted with her sister, Umm al-Fadl, the wife of al-'Abbas b. 'Abd al-Muttalib, and al-'Abbas took the news to the Prophet (s). The Holy Prophet (s) sent Ja'far b. Abi Talib to ask her for marriage.[10] It is reported that when she heard the news, she was riding a camel. Just then, out of sheer joy she screamed, "Let the camel and its rider be for God and His messenger."[11] For that reason, the verse 50 of Quran 33 was revealed, "… and the faithful woman who gifted herself to the Prophet (s) …" 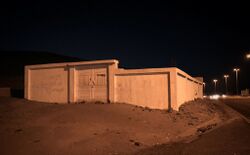 There is disagreement about the year of her demise. Allama Askari writes that she passed away on her way back from hajj in 51/671 in Saraf.[25] Ibn 'Abbas said her funeral prayer;[26] and according to her will, she was buried in the same place where she and the Holy Prophet (s) were married.[27] According to a report, she was the last of Prophet Muhammad's wives to pass away.