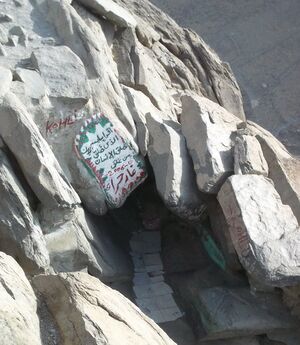 Taḥannuth (Arabic: التَحَنُّث) was a traditional practice among some people of Hijaz before the emergence of Islam. It consisted in an isolation from others for a few days of the year in order to reflect on themselves. People who practiced Tahannuth included: 'Abd al-Muttalib and Prophet Muhammad (s) before his bi'tha. They usually worshipped God in the cave of Hira' for one month a year.

"Ḥinth" (Arabic: حِنث) literally means to break one's oath or to commit a sin, but when it is used in the form of "tafaʿʿul" (which yields "Tahannuth"), it means the negation of "hinth", that is, to avoid sins.[1] Thus, some people have taken "tahannuth" to mean the obedience of God.[2] Words, "Ta'abbud" (obedience of God) and "Nusk", are also used to refer to "Tahannuth".[3]

Tahannuth was a spiritual practice, like I'tikaf, in which, one isolated oneself from people, worshiped God, reflected on oneself, and did good things, in order to avoid sins and to purify one's soul.[4]

According to a hadith from Imam Ali (a), the Prophet (s) used to go to Hira' and stay there for a while every year before his Bi'tha.[5] In accordance with the tradition of the Quraysh, he stayed in Hira' for one month of the year, and gave food to poor people who visited him there. He then went to the Ka'ba and circumambulated for seven rounds or more. He then went back home. He practiced the tradition until the Bi'tha.[6] According to a hadith from Aisha, the Prophet (s) loved seclusion more than anything else. He went to the cave of Hira' to practice Tahannuth for several nights. He then went back home to lady Khadija (a), taking foods and provisions to stay more in the cave. The Prophet (s) practiced this until his Bi'tha.[7] Some people have reconciled the two hadiths by speculating that the Prophet (s) went back home after few nights of his Tahannuth in order to take some provisions, and then returned to the cave. He went back and forth between home and the cave for one month.[8]

Most of the hadiths imply that the Prophet (s) practiced Tahannuth on his own,[9] but according to some hadiths,[10] Khadija (a) accompanied him to the place where he practiced Tahannuth, and sometimes took water and food to him.[11] However, remarks by Imam Ali (a) show that nobody except him witnessed the Prophet's (a) Tahannuth and the revelation of the Wahy to him.[12]

According to some hadiths, the Prophet (s) started to practice Tahannuth in the cave of Hira' ten years before his Bi'tha, which is the year when Ali (a) was born. In this period, the Prophet (s) heard songs of the stones and the trees and saw divine lights, until Wahy was revealed to him.[13]

After his Bi'tha, the Prophet (s) abandoned Tahannuth, which he used to do in order to isolate himself from the community of the Jahiliyya and their traditions,[14] and after his Hijra, he practiced I'tikaf in the Mosque of Medina for ten days of the month of Ramadan every year.[15]

Some hadiths imply that before the emergence of Islam, Tahannuth was known among the Quraysh. According to some historical accounts, some people from Quraysh practiced Tahannuth in Hira' during the month of Ramadan. They went to Hira' in this month, stayed there for a month, and helped poor people who went to visit them there. At the end of the month, they went to Masjid al-Haram, circumambulated around the Ka'ba for seven rounds, and then went back home.[16] Given that the cave of Hira' is small, only few people from the Quraysh must have practiced Tahnannuth in there. It is probable that it was only practiced by the Hunafa'.[17]

According to al-Baladhuri, 'Abd al-Muttalib, the Prophet's (s) grandfather, began this tradition among the Quraysh,[18] but Ibn Hisham held that Tahannuth used to be a tradition in al-Hanif Religion. He believed[19] that the word, "Tahannuth", is a transformation of "Tahannuf" (which means being "Hanif")—the "th" sound has changed into "f" sound.[20]

Just before the emergence of Islam, some people from the Quraysh who were known as Hunafa' avoided some habits in their tribe, such as idolatry, eating dead animals, drinking blood, and eating the sacrifices for the idols. One such person was Zayd b. 'Amr b. Nufayl who criticized polytheists and took refuge to the Hira' mountain in order to protect himself against his uncle, Khattab b. Nufayl.[22] However, it is said that in his practice of Tahannuth, neither did the Prophet (s) follow the tradition of the Quraysh, nor that of Hunafa'.

Some orientalists hold that Tahannuth has a Hebrew root: it is allegedly derived from "Tihinnut" or "Tihinnuth" which means individual worship. They have denied any connection between "Tahannuth" and "Tahannuf", and have cast doubts over whether it was common among the Quraysh before the emergence of Islam.[23] According to some authors, the Prophet's (s) Tahannuth was unprecedented and so he did not follow Hebrew traditions in this practice.[24]