From wikishia
(Redirected from Joshua (a)) 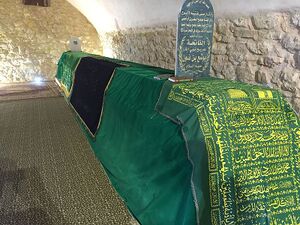 Yusha' (a) (Joshua) b. Nun was among the prophets of Israeilites and the successor of Moses (a).[1] He was among descendants of Josef (a) and Zulaykha.[2] His birth is mentioned in Egypt.[3] In some sources, his lineage up to Prophet Abraham (a) is given as: Joshua b. Nun b. Ephraim b. Josef b. Jacob b. Isaac b. Abraham.[4] Some considered him Dhu l-Kifl, a nephew of Moses (a) and his disciple.[5] The title Dhu l-Kifl is mentioned twice in the Qur'an. His age is mentioned 110 to 126 years in different sources.[6]

There are different views about his burial place. Al-Tabari mentioned his grave on mount Ephraim in Palestine.[7] Al-Hirawi and some other historians mentioned his grave in Kifl Haris,[8] south west of Nablus, Palestine.[9] Other sources have mentioned his grave in Takht-i Fulad cemetery of Isfahan, Iran.[10] In some historical and hadith sources, Yusha's (a) demise is mentioned on 21st of Ramadan, on the same day as the martyrdom of Imam Ali (a).[11] There is also a place attributed to Yusha' (a) in Sulta near Amman, Jordan, today. Also, in Tripoli, north of Lebanon, there is a place attributed to him.[12]

Based on Qur'an 5:23, exegetes have introduced him a God-wary person.[13] In exegetical sources, Yusha' (a) is considered loyal to Moses (a)[14] because he did not join disobedient people when Moses (a) gave order to fight with oppressors. His name is not mentioned in the Qur'an, but exegetes have considered some verses of Qur'an 5 and Qur'an 18 about him.[15] In some books of supplication, there is a supplication attributed to Yusha' (a).[16]

In the holy book of Jews, his name is mentioned as Yehoshuʿa. According to the Old Testament, his name was first Hosea, meaning "he saves", but he was later called Yehoshuʿa, meaning "Yahweh is salvation".[17]

Historical sources described Yusha' (a) loyal to Moses (a) and a companion of him.[18] The Torah has mentioned him a commander of Moses (a) in one of the battles.[19] According to the Torah, when Moses (a) had gone up mount Sinai to receive the Ten Commandments, Yusha' (a) was with him.[20] In the event of the disobedience of Israeilites from the order of Moses (a) for going to war, only Yusha' (a) and some others were not included in God's wrath. Therefore, God gave them the good news of their presence in the Promised Land.[21]

His prophethood is mentioned in different sources.[24] After the demise of his brother Aaron (a), Moses (a) appointed Yusha' (a) as his successor.[25] Some days before his demise, Moses (a) trusted Yusha' (a) with the tablets, on which the rules of God were written together with his armor. Yusha' (a) became Moses' (a) successor at the age of ninety. The period of Yusha's (a) prophethood is mentioned between twenty seven[26] to thirty years.[27]

According to historians, Yusha' (a) attacked Palestine and the Levant and accomplished God's promise for accommodating Israeilites in the Promised Land.[28] God gave him order to attack those lands by the help of Israeilites. According to historical texts, tyrant rulers ruled over these places at that time.[29] In this battle, he conquered Palestine and Jerusalem.[30] One of the regions conquered before Jerusalem was Ariha (Jericho) in the Levant.[31] Before attacking Jericho, Israeilites wandered in the desert for forty years due to their disobedience during the prophethood of Moses (a).[32]

According to some sources, Yusha' (a) worried about prolonging of the battle to the eve of Saturday. These sources mentioned his lack of permission for fighting on Saturday as the reason of his worry.[33] He asked God to delay the sunset so that they could accomplish the conquest of Jerusalem. By the will of God, the sunset was delayed.[34] This event was called Radd al-Shams (returning the sun). According to historical sources, the miracle of Radd al-Shams took place only during the prophethood of some prophets including Prophet Muhammad (s).[35] In some reports, the reason Yusha' (a) asked for delay of the sunset was that due to darkness, there was a chance of Yusha's (a) defeat from remaining soldiers of the enemy.[36] Some sources considered this story about conquering Bulqa.[37]

Al-Tabari mentioned Ariha the city Moses (a) conquered.[38] After the conquest of Palestine and Assyria, Yusha' (a) divided these regions among the tribes of Israeilites.[39]

A part of the Old Testament is named Joshua. In that part known as the Book of Joshua, his life and the events during his prophethood are explained. This book is after the book of Deuteronomy and before the book of Judges. The conquest of Assyria, Palestine and how Israeilites returned to their land are among the events mentioned in the book of Joshua.[40]

In the commentary of the verse about the twelve tribes in Qur'an 5,[41] exegetes have mentioned Yusha' (a) the leader of one of the tribes.[42] Also, based on the view of some exegetes, the two God-wary men who were given blessings by God were Joshua b. Nun and Caleb b. Jephunneh, two leaders of the twelve tribes.[43]

According to some Islamic hadiths, Yusha' (a) will return after the Reappearance of Imam al-Mahdi (a) and will be with him together with Jesus (a).[44]