Pharaoh, (Arabic: فِرعون) or Firʿawn in Arabic, was the ruler of Egypt at the time of Prophet Moses (a). The Qur'an introduces him as a tyrant, who claimed to be the god of the people of Egypt. He enslaved the Israelites who had resided in Egypt at the time of Joseph (a).

In order to prevent the birth of Moses (a), he commanded that the male Israelite infants be killed immediately after birth.

When Moses (a) was chosen as a prophet, God commanded him to speak to Pharaoh gently so that he stops his aggression and sets the Israelites free.

However, despite all the sings and miracles that Moses (a) showed him, Pharaoh refused to accept Moses' (a) message and accused him of being a magician.

Most lexicographers consider the word "Firʿawn" a non-Arabic word[1] ; many consider that a Coptic word meaning crocodile[2]Tahdhīb al-lugha. However, some scholars maintain that "Pharaoh", or "Bar-'a " or "Bar-'u" in its Coptic form, initially meant royal palace but gradually became an honorific title for the king himself. Some others consider "Pharaoh" simply a title for the Egyptian king at the time of Moses (a)[3]. According to others, it was a title for Amalek kings[4], or Amalek kings in Egypt[5] . However, the majority opinion is that "Pharaoh" was a general title for Egyptian kings of the eighteenth dynasty of the twenty-nine dynasties of ancient Egypt[6].

The word "Fir'awn" appears in the Qur'an seventy-four times[7], all of which refer to the Pharaoh of the time of Moses (a)[8].

The Qur'an introduces Pharaoh as a tyrant, who worshipped certain gods other than the One God.[9] He himself claimed to be a god.[10] The verse "I am your exalted lord" [11] indicates that he considered himself the god of the Egyptians.[12]

According to the Qur'an, Pharaoh was an arrogant oppressor, who used to divide the people in order to strengthen his rule.[13] He had a vizier called Haman, a group of high officials, and a powerful army,[14] on whom he relied in his rule.[15]

Pharaoh regarded himself in control of the people's beliefs; he would imprison[16] or severely punish those who believed in something against his will.[17] For instance, when he found out that his wife had believed in Moses (a), he had her executed.[18]

The Qur'an describes Pharaoh as the "impaler" [19], which means, according to the traditions, the one who would impale on the ground those he disobeyed him and leave them until they die.[20]

His Behavior towards the Israelites

The Israelites, who were decedents of Prophet Jacob (a), migrated to Egypt when Joseph (a) was the vizier of Egypt and famine struck Canaan[21].

According to the Qur'an, Pharaoh oppressed the Israelites; he killed their sons and enslaved their women[22]. As to the reason why Pharaoh killed the Israelite boys, al-Suddi (d. 128/745-6), an early commentator of the Qur'an, reports a story, according to which Pharaoh had a strange dream, so he asked the priests to interpret his dream. The priests stated that the dream indicated the birth of an Israelite boy who would kill Pharaoh when he grows up. Thus, in order to prevent this fate, Pharaoh commanded that the Israelite male infants be killed[23].

However, according to some hadiths from Imam al-Baqir (a) and Imam al-Sadiq (a), the Israelites awaited the birth of Moses (a), who, according to the prophesy of Joseph (a), was to kill Pharaoh. The news of this belief reached Pharaoh, and one year the priests and magicians at his court informed him that the promised son would be born in that year. Thus, Pharaoh commanded the murder of all Israelite male infants immediately after birth[24].

When Moses (a) was born, God inspired his mother to put him in an ark and cast the ark into the riverbank. Thus, the water carried Moses to Pharaoh's people, who took him from the riverbank[25]. When Pharaoh's wife saw the baby, she asked Pharaoh, "Do not kill him; maybe he will benefit us, or we will adopt him as a son" [26]. Some commentators have understood this verse as indicating that Pharaoh and his wife did not have any children[27].

In his youth, Moses (a) once came across an Israelite who was having a fight with a Coptic man. Moses (a) rushed to help the Israelite man and struck the Copt, who died immediately. After this incident, Moses (a) fled from Egypt towards Midian to escape Pharaoh's punishment[28].

Reaction to the Prophethood of Moses (a)

Upon his return to Egypt, Moses (a) was chosen by God as a prophet, given a number of "signs," and commissioned to go to Pharaoh, who had "rebelled," and to call him gently to the path of God [29].

Together with his brother Aaron, who was also chosen by God as a prophet to help him, Moses (a) went to Pharaoh and introduced himself as God's apostle[30] and called Pharaoh to be wary of God [31] and release the Israelites.[32]. However, Pharaoh mocked him and threatened to imprison him if he did not abandon his beliefs.[33].

Moses (a) presented his miracles,[34] including the transformation of his staff into a snake,[35] to demonstrate his truthfulness, but nevertheless Pharaoh and his courtiers continued to deny his prophethood and accused him of being a magician.[36].

Afterwards, Pharaoh called the skilled magicians of Egypt[37] to prepare a similar work of wonder in the presence of people on the feast day. However, when Moses (a) presented his miracle, the magicians realized that it was not a human work, so they believed in God and in Moses (a) as His prophet. Pharaoh became furious at the magicians, accused them of being the disciples of Moses (a) who had conspired against him, and threatened to cut off their hands and feet alternately. However, the magicians persisted in holding on to their faith[38] and said, "We will never prefer you to the manifest proofs which have come to us and [to] Him who originated us. Decide whatever you may. You can only decide about the life of this world" [39].

Pharaoh resumed killing the sons of those who followed Moses (a) and enslaving their women.[40] He even decided to kill Moses (a),[41] a measure with which some courtiers seem to have disagreed, especially "the believer of the family of Pharaoh," who had hidden his faith.[42]

Pharaoh also commanded Haman to built a tower, which he could ascend and see the god of Moses.[43] However, Allama Tabataba'i states that Pharaoh was a demagogue, who intended merely to show himself as an unbiased person.[44]

The Punishments of the People of Pharaoh

According to the Qur'an, when the Copts, whom the Qur'an calls the family of Pharaoh, refused to believe in Moses (a), God afflicted them with famine for several years, but "whenever any good came to them, they would say, ‘This is our due.’ And if any ill visited them, they took it for ill omens attending Moses and those who were with him" [45].

God also afflicted them with various disasters such as flood, locusts, lice, frogs, and the transformation of Nile's water into blood. These disasters are described in the Qur'an as "distinct signs" [46]; that is, they appeared one after another and with intervals between them. Each time, the people of Pharaoh were plagued to the extent that they asked Moses (a) to pray to his Lord to remove the disaster, and in return they would believe in him and release the Israelites. However, when Moses (a) prayed and the disaster was removed, they broke their promise.[47]

Drowned in the Sea

The Qur'an reports that when Pharaoh was drowning, he called out, "I believe that there is no god except Him in whom the Children of Israel believe, and I am one of those who submit [to Him]" [50], but God told him, "What! Now? When you have been disobedient heretofore and were among the agents of corruption?! So today We shall deliver your body so that you may be a sign for those who come after you." [51]

The Bible reports the story of the genocide of the Hebrew children, Moses' birth and his mother leaving him to the river, and the defeat of the magicians (albeit without mentioning their belief in God afterwards)[52]. It also mentions the story of the disasters with which the Copts were afflicted[53].

The Torah mentions the story of the drowning of Pharaoh and his troops, but does not mention anything about his profession of faith while he was drowning or about the preservation of his body by God[55]. 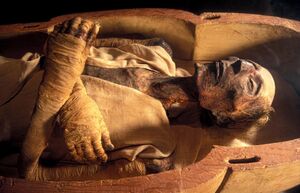 There is disagreement among the scholars as to which pharaoh was the contemporary of Moses (a). The following Egyptian pharaohs have been suggested as the pharaoh or the two pharaohs of Moses' time: