From WikiShia
(Redirected from Sacrifice of Isma'il (a))
Jump to: navigation, search 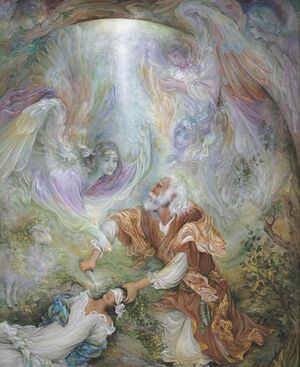 The Shi'a scholars generally rely on hadiths and the contexts of Quranic verses to believe that Isma'il (a) was the one who was commanded to be sacrificed. But Sunnis and the Jews take Ishaq (a) (Isaac) to be the sacrifice.

According to the text of the Qur'an 37:102, the command to sacrifice his son was given to Ibrahim in his dreams[1]. According to some hadiths, Ibrahim saw the same dream three times, Ibrahim was commanded in a dream to sacrifice his son. When he woke up, he doubted whether the dream was from God. On the second night, he saw the same dream again. He was now certain that the dream was a divine command. He saw the same dream on the third night too.[2] However, some exegetes believe that Ibrahim still had doubts after the dreams, and his doubts disappeared after a revelation from God.[3]

Sacrifice of the Son

Ibrahim told the story of his dream and the divine command to Isma'il and asked about his opinion. According to the Qur'an 37:102, the conversation went like this: "he said, O my son, indeed I have seen in a dream that I [must] sacrifice you, so see what you think". He said: "O my father, do as you are commanded. You will find me, if Allah wills, of the steadfast".[4]

When they decided to comply with the divine command, Isma'il said: "Oh father! Cover my face and tie my legs". Ibrahim accepted to cover his head, but refused to tie his legs.[5] When Isma'il's forehead was put on the soil,[6] Ibrahim put the knife on his throat, directed his head to the sky, and then moved the knife, but Jabra'il prevented the knife from cutting. This happened a number of times. After that, it was revealed to Abraham: "You have fulfilled the vision".[7]Finally, a ram from the heaven was sacrificed by Abraham, instead of Isma'il.[8]

The Qur'an referred to this test as "the clear trial".[9] On some accounts, Iblis tried his best to prevent Ibrahim from complying with the divine command. To do so, he tried to mislead Abraham, his wife, and his son, and in all three cases, he failed.[10]

A Conversation Between Ibrahim and an Old Man

In some Shiite sources, a conversation between Ibrahim and an old man is cited: "an old man told Ibrahim: what do you want from this child?

Ibrahim: I want to sacrifice him.

The old man: exalted is God! You want to kill a child who has never committed a sin even as much as a blink of an eye!

Ibrahim: God has commanded me to sacrifice this child.

The old man: no; your Lord has prohibited you from this, and it is the devil who has commanded you to do so in your dreams.

Ibrahim: woe to you! The command was from God. I swear to God that I will never talk to you.

The Old man: O Ibrahim! You are a leader who is followed by others. If you sacrifice your child, people will also sacrifice their children.

The Qur'an has only referred to the son of Ibrahim without naming him.[12] However, there is a disagreement over whether the son was Isma'il or Ishaq. The Shi'a believe that the story was about Isma'il.[13] To prove their claim, they appeal to verses 100-107 of Sura al-Saffat in which the news of the birth of Ishaq occurs after the birth of Isma'il and the story of sacrifice.[14] There are also hadiths from the Infallibles (a) in which Isma'il is introduced as the sacrificed son.[15]

Sunnis have different views about Dhabih.[16] Some of them refer to hadiths[17] in which they consider Dhabih Allah the title of Ishaq (a). This view is attributed to 'Umar b. Khattab, Sa'id b. Zubayr, Ka'b al-Ahbar, Qutada, Zahri, al-Tabari and Malik b. Anas.[18] Some Shi'a authors considered reports which introduced Ishaq Dhabih Allah influenced by Isra'iliyyat and considered it possible that they were forged by Jews.[19] Some others among Sunnis referred to another group of hadiths and considered Isma'il (a), Dhabih. This view is attributed to Abu Hurayra, 'Amir b. Wathila, 'Abd Allah b. 'Umar, Ibn 'Abbas, Sa'id b. Musayyib, Yusuf b. Mihran, Rabi' b. Anas, etc.[20] Also, al-Fakhr al-Razi and Ibn 'Ashur considered it possible that Isma'il (a) was Dhabih.[21]

Eid al-Adha is one of the greatest eids of Muslims. The tradition of sacrificing animals is a remembrance of the sacrifice of Isma'il.[22] According to some hadiths, all animals slaughtered on Eid al-Adha in Mina are ransoms for Isma'il.[23] There are different accounts of the origin of ramy al-jamarat according to some of which Ibrahim stoned the devil in the story of the sacrifice of Isma'il.[24]

The story of the sacrifice of the son of Ibrahim appears in the Torah as follows: "Then God said: Take your son, your only son, whom you love (Isaac) and go to the region of Moriah. Sacrifice him there as a burnt offering on a mountain I will show you".[25]

But when Ibrahim decided to slaughter his son and took the knife to his son, the angel of the Lord called out to him from heaven: "Abraham! Abraham!"? Here I am, he replied. "Do not lay a hand on the boy, he said. Do not do anything to him. Now I know that you fear God, because you have not withheld from me your son, your only son".[26] finally, God sent a ram, and Ibrahim slaughtered the ram instead.[27]

However, according to some parts of the Book of Genesis, the sacrifice was Ibrahim's "only son" then, but it is known that Ishaq was born after Isma'il, and so, at the time of sacrifice, Ishaq was not Ibrahim's only son.[28]