Sāmirī (Arabic: السامري) was the person who made a calf in the absence of Prophet Moses (a) and urged Banu Israel to worship it. The Qur'an has mentioned him in three verses, all of which are about making the calf. Samiri was from Banu Israel and there is a disagreement about his name and lineage.

Samiri was among the people who went out of Egypt together with Banu Israel. He pretended to be a follower of Prophet Moses (a) and was considered among the chiefs of Banu Israel.[1] From some reports, it can be inferred that he was a generous person.[2] There is a disagreement about his name and lineage;[3] however, some sources mentioned his name Musa b. Zafar,[4] a descendant of Yashakir, son of Prophet Jacob (a).[5]

His name is mentioned in the Qur'an three times all of which are about making the calf and urging Banu Israel to worship it.[6] 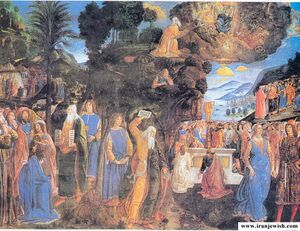 Following the promise of God, Prophet Moses (a) went to the appointment for thirty days and it was extended for ten more days, "And We made an appointment with Moses for thirty nights, and completed them with ten [more]; thus the tryst of his Lord was completed in forty nights."[7] Prophet Moses' (a) return was delayed and it was difficult for Banu Israel who were not aware that his stay had been extended. Samiri used jewels and gold of the people, made a calf[8] and invited people to worship that idol.[9]

When Prophet Moses (a) found out about the role of Samiri in calf-worship of Jews and asked him about it, he answered, "I saw what they did not see. I took a handful [of dust] from the messenger's trail and threw it. That is how my soul prompted me."[10] About this verse, which has some ambiguities, different interpretations and narrations have been offered, some of which are about taking the soil under the feet of Jabra'il (Gabriel) by Samiri.[11] Some researchers and exegetes have cast doubts on the authenticity of many of these narrations.[12]

According to a hadith from Imam al-Sadiq (a), Prophet Moses (a) decided to punish Samiri because of his actions and kill him; but God released him from death for his generosity.[13]

The Qur'an suffices to a quotation from Prophet Moses (a), 'Begone! It shall be your [lot] throughout life to say, "Do not touch me!" Indeed there is a tryst for you which you will not fail to keep!'[14] The first part of the verse refers to Samiri's punishment in this world and the second part refers to his punishment in the Hereafter.

However, there are different reports about Samiri's punishment in this world:

Ostracism was the punishment of Samiri in this world. Prophet Moses (a) repudiated him from Banu Israel; thus, no one was allowed to contact him and he was not allowed to contact anyone and any association or business with him was forbidden.[15]

Some exegetes believe that after Samiri's great sin was proved, Prophet Moses (a) cursed him and God afflicted him with a mysterious illness so that no one could contact him until his death.[16]