Sūra al-Sāffāt (Arabic: سورة الصافات) is the thirty seventh sura of the Qur'an. It is a Makki sura located in juz' twenty three. "Al-Saffat" means those who stand in a line. It is said that it refers to angels in line or believers who perform prayer. The main topic of this sura is monotheism, warning polytheists and giving good news to believers. In this sura, the story of sacrificing Isma'il (a) and parts of the history of the prophets (a), including Noah (a), Abraham (a), Isaac (a), Moses (a), Aoron (a), Elias (a), Lot (a) and Jonah (a) are mentioned.

One of the famous verses of this sura is the verse "Salam-un 'ala El-Yasin..." which is also pronounced "Al-i Yasin", and it is said that it refers to the Ahl al-Bayt (a) of the Prophet (s). According to hadiths, if a person recites this sura on Friday, he will be safe from any harm, afflictions will be away from him in this world, and his daily sustenance will reach the maximum limit.

Sura al-Saffat is called so because the word "al-saffat" is mentioned in its first verse.[1] "Al-Saffat" means those who stand in a line.[2] It is said that it refers to the angels ranged in the sky or believers in the line of prayer or jihad.[3]

Sura al-Saffat is among Makki suras and was fifty sixth sura revealed to the Prophet (s). This sura is thirty seventh sura in the Qur'an now,[4] located in juz' twenty three.

Sura al-Saffat has 182 verses, 866 words and 3903 letters. Regarding volume, this sura is among Mi'un suras (having about hundred verses).[5] Al-Saffat is the first sura beginning with a swear.[6]

According to Tafsir al-Mizan, the main topic of this sura is monotheism, warning polytheists, giving good news to believers and mentioning the destiny of both groups.[7] Based on Tafsir-i Nemuna, Sura al-Saffat speaks about five topics: 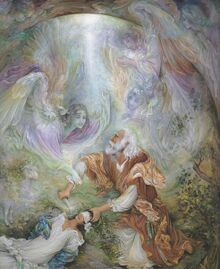 The Great Trial by Mahmud Farshchiyan
Main article: Sacrifice of Isma'il (a)

In verses hundred to 107 of Sura al-Saffat, the story of the mission of the Prophet Abraham (a) for sacrificing his son is mentioned. In these verses, it is mentioned that in a dream, Abraham (a) saw that he (a) has to sacrifice his son and when he decided to do so and placed his son's forehead on the ground, God called him that, "You have indeed fulfilled your vision! Thus indeed do We reward the virtuous!." So, a great sacrifice (a ram according to commentaries) was made instead. God calls this event "a manifest test".

The following events are mentioned in Sura al-Saffat:

It is transmitted from Imam al-Sadiq (a) that if a person recites Sura al-Saffat every Friday, he will be safe from any harm, and afflictions will be away from him in this world; and his daily sustenance will reach the maximum limit; and Satan would not cause any harm to his property, body and children; and if this sura is recited either at night or during the day, the reciter will be resurrected as a martyr, and God will take him to the highest level of the paradise together with martyrs.[14]