From WikiShia
(Redirected from Tafsir al-Nu'mani)
Jump to: navigation, search

Tafsīr al-Nuʿmānī (Arabic: تفسير النُعماني) is a treatise in Quranic sciences from Shi'i point of view which is attributed to Muhammad b. Ibrahim al-Nu'mani (d. 360/971). However, there is doubt in the attribution of this book to al-Nu'mani and has also been published by the name of Risalat al-muhkam wa l-mutashabih attributed to al-Sharif al-Murtada. It contains topics in Quranic sciences, usul al-fiqh, and some theology.

Although this treatise has been called tafsir (exegesis), its content is mostly about Quranic sciences, principles of jurisprudence and some theological issues.

Among these topics, there are issues such as

After the above list of topics, it is mentioned that Shi'as came to Imam 'Ali (a) and asked about the mentioned topics[1] and that this treatise is actually Imam 'Ali's (a) answer to those questions. This is mentioned in different places of the treatise as well.[2]

Although the author tries to attribute the text to Imam 'Ali (a), the existence of many issues in this treatise which dates back to periods later than the time of Imam 'Ali (a) casts doubts on the author's claim. Some of such topics are the wealth and lack of faith and disbelief, criticizing ijtihad, deduction and criticizing Mu'tazilite opinions.[3]

Although a tafsir book is attributed to al-Nu'mani, this treatise is different from that book.

Before the time of Ibn Shahrashub (d. 588/1192) and in rijali references, there is no tafsir works among the works of al-Nu'mani. Ibn Shahrashub is the first person who mentioned a book called Tafsir al-Qur'an li-Ahl al-Bayt (a) under the name of Abu 'Abd Allah Muhammad b. Ibrahim al-Nu'mani.[4] The existing treatise of Tafsir al-Nu'mani quotes a hadith from a book of tafsir written by al-Nu'mani[5] and this can be an evidence for existence of such a book, especially because the hadith is quoted from Ibn 'Uqda (d. 368/979) who was his teacher and al-Nu'mani frequently quoted from him in al-Ghayba.[6]

In any case, even if we agree on the existence of an exegesis book by al-Nu'mani, it is obvious that this treatise is different from it and there is only one hadith quoted from the mentioned book. Probably, this very hadith has been the cause of attribution of this treatise to al-Nu'mani.[citation needed]

Although his name is not known to us, his character can be known with regards to the characteristics of the treatise.

Since the author has benefited from the tafsir written by al-Nu'mani (d. 360/971), the oldest date for writing the treatise can be considered the second half of the 4th/10th century.

Since many theological issues are mentioned in this treatise and theological outlook can be seen all around it, its author has most possibly been a theologian. Although he does not follow other hadith scholars in mentioning hadith references, there are cases where his ideas are close to traditionists; some examples of which are defending the theory of tahrif (the distortion of the Qur'an)[7] and his approach in criticizing adherents of deduction and ijtihad.[8]

Although the author has not mentioned any sources other than the Tafsir written by al-Nu'mani, other sources for it can be found through research. In addition to the Tafsir al-Qummi which possibly have been used by the author as his main reference, he seems to have consulted the ideas and works of Hisham b. al-Hakam[9] in discussion about the necessity of the existence of an Infallible Imam and the attributes of Imam.[10]

Moreover, a big part of the discussions in this treatise is about refuting the ideas of the adherents of personal judgment and deduction[11] as an answer to the views of al-Shafi'i (d. 204/819) in al-Risalah.[12]

Similarity with the Introduction to the Tafsir al-Qummi

Another point of controversy about Tafsir al-Nu'mani is its remarkable similarity with the introduction to the Tafsir al-Qummi and another treatise written by Sa'd b. 'Abd allah al-Ash'ari which al-'Allama al-Majlisi has mentioned some parts of.[13]

After comparison of these three texts to explain their similarity, it can be concluded that the introduction to the Tafsir al-Qummi and the treatise written by Sa'd b. 'Abd Allah al-Ash'ari seem to be two accounts of one text; however, the main content and style of Tafsir al-Nu'mani follows the introduction to the Tafsir al-Qummi and then later, more examples and explanations have been added to it and through consulting other sources, more topics have also been added to it.[14] 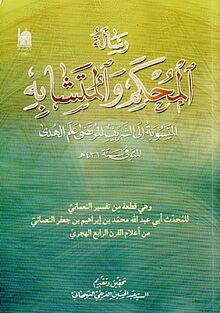 When quoting from this treatise, al-Majlisi did not mention any reference for it, and just says that he received a copy of it through wijada (narrating from a text). Moreover, permissions for quoting hadith mentioned in this treatise[23] are a combination of some permissions and do not exist elsewhere in a connected way (i.e., there is no complete chain of people who have attributed this treatise to al-Nu'mani and the chain of narrators is not complete.)