From wikishia
(Redirected from Muhaddith Nuri)

Shaykh Mīrzā Ḥusayn b. Muḥammad Taqī b. ʿAlī Muḥammad Nūrī Ṭabrisī (Arabic: شیخ میرزا حسین بن محمد تقی بن علي محمد نوري طبرسي) (b. 1254/1839- d. 1320/1902), known as Muḥaddith Nurī (Arabic: محدث نوري), was an eminent Shi'a Muhaddith (narrator) of the 14th/19th century. Religious scholars and his students eulogized him. He is well known for his books Mustadrak al-Wasa'il and Fasl al-khitab fi tahrif kitab Rabb al-Arbbab (The last word about distortion of the Book of the Lord of the Lords). In the latter, by quoting some hadiths, he has tried to prove that although the Qur'an is the exact words of God and nothing was added to it and it has not changed, some verses were excluded during its compilation (distortion by reduction), despite the fact that they are preserved by righteous people. The distribution of the book triggered a wave of backlash against him, causing him a myriad of troubles, and even raising criticisms of both Shi'a and Sunni scholars. There are books written in rejecting his viewpoints.

Muhaddith Nuri was born in Shawwal 18, 1254 (January 4, 1839) in Yalu, village in Noor, a city in Mazandaran province, Iran. During his childhood, he participated in the sessions of the great faqih, Mulla Muhammad Ali Mahallati and studied a part of Islamic studies. At his early youth, he moved to Tehran to study under scholars such as Shaykh 'Abd al-Rahim Burujirdi, whose daughter he later got married to.

In 1273/1856-7, at the age of 19, he moved to Najaf and stayed there for four years. After that, he returned to Iran. And after a year, he emigrated back to Iraq in 1278/1861-2. He participated in the classes of the then great scholar, Shaykh 'Abd al-Husayn Tihrani known as Shaykh al-'Araqayn, in Karbala and moved along with him to Kadhimiya and stayed there for two years.

In 1284/1867-8, he traveled to Mashhad, Iran, for Ziyarah of Imam al-Rida (a). Two years later, he returned to Iraq and for the second time visited Mecca for pilgrimage. After his return to Iraq, he took part in the class of Mirza Shirazi. When Mirza Shirazi moved to Samarra in 1291/1874-5, Muhaddith Nuri along with his teacher, Fath Ali Sultan Abadi, and his son-in-law, Shaykh Fadl Allah Nuri moved to Samarra a year later. In 1314/1896-7, he returned to Najaf and stayed there for the end of his life. Mustadrak al-Wasa'il is his most famous work in which he added hadiths to Wasa'il al-Shi'a -written by Shaykh Hurr al-'Amili- and completed it.

The book is one of the most controversial books in Shi'a world. Muhaddith Nuri finished its writing on Jumada II 28, 1292, August 1, 1875. The title of the book implies that the Qur'an was distorted like Torah and Bible -as Muslims believe so. But, according to the book and what Aqa Buzurg Tihrani heard from Muhaddith Nuri, he did not mean by distortion of the Qur'an that the existing Qur'an is not the words of God or some verses has been added to it or omitted from it after its compilation during Uthman's caliphate. He believed that the current version of Qur'an is the one compiled during Uthman's caliphate as a single book. He believed that some hadiths connote that before compilation there were verses in the Qur'an which were excluded and currently unavailable for us, but preserved by the infallible Imams (a). We do not know what verses were omitted exactly; however, we generally know some verses were excluded from the Qur'an.

The title of the book "Fasl al-khitab fi tahrif kitab Rabb al-Arbbab" (The last word about distortion of the Book of the Lord of the Lords) misled his contemporaneous scholars and people that he meant the Qur'an has been distorted like other divine books -as Muslims believe- and is not the words of God. During a meeting with his student, Aqa Buzurg Tihrani, he expressed his regret about giving this title to the book and said that he should have titled it "Fasl al-khitab fi 'adam tahrif al-Kitab" (the last on refuting distortion of the Qur'an) or "al-Qawl al-fasil fi isqat ba'd al-wahy al-nazil" (The conclusive word about the omission of some sent down revelation) so that the people would not have been misled.

In this book, Muhaddith Nuri meant by the word "Tahrif" (distortion) reduction and omission of some verses of Qur'an, not addition or change or edition of its words or verses.

Giving a description about this book in his bibliography book, Aqa Buzurg Tihrani counts the book as one of the books refuting distortion of the Qur'an and says, "He [Muhaddith Nuri] has proven that the Qur'an was not distorted by addition, change, alteration and such, in this book." 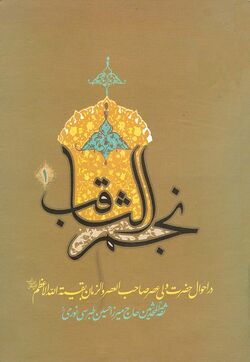 However, from the early distribution of the book, Shi'a scholars opposed Muhaddith Nuri's opinion by writing books and treatises. For instance, in 1302/1884-5, Shaykh Mahmud Tihrani authored the book Kashf al-irtiyab 'an tahrif al-Kitab (dispelling the doubt from distortion of the Book). In response, Muhaddith Nuri wrote the treatise "al-Jawab 'an shubahat Kashf al-irtiyab" (the respond to problems of Kashf al-irtiyab). It is said that he has changed or explained some of his opinions in this treatise and tried to clarify the misunderstandings. In this treatise, he expressed his dissatisfaction of reading Fasl al-khitab before reading this treatise and said that the treatise is counted as a supplement to the book.

This book which is written in Persian, is about the twelfth Imam (a) and contains his biography, arguments in favor of his existence, stories of the people who have met him (a), believers' duty towards that Imam in the occultation period. In compilation of this book, he has used common shi'a and sunni sources.