This article is an introduction to the Sura Fatir; to read its text see text:Sura Fatir.

Sūra Fātir (Arabic: سورة فاطر, the Originator) or Sūra al-Malāʾika (Arabic: سورة الملائکة, the Angels) is the thirty fifth sura of Qur'an. It is a Makki sura which is located in the twenty second juz'. It is one of the hamidat suras which start with praising God.

Sura Fatir is about the resurrection, situation and difficulties of the Day of Judgment and repentance of disbelievers. It also warns mankind of deceitfulness of Satan and life which lead astray. Blessings of God are also mentioned in this sura and it recommended people to say prayers, spend for God and recite Qur'an as valuable deeds.

The famous verses of this sura of Qur'an are the fifteenth verse which states that God is not in need of anyone while mankind is in need of God, and the eighteenth verse which talks about divine justice and severe punishment of God on the Day of Judgment. It is narrated from Prophet Muhammad (s) that if someone recites Sura Fatir, three doors of the Heaven will invite him toward themselves on the Day of Judgment.

This sura of the Quran is called "Fatir" or "al-Mala'ika" (the Angels) which both are stated in the first verse of this sura.[1] The term "Fatir" derives from the word "fatara" and it means "the originator of the heavens and the earth" as it is cited in the first verse.[2][3]

This sura of Quran was the forty third sura revealed to Prophet (s) after Sura al-Furqan and before Sura Maryam. Sura Fatir is the thirty-fifth sura of Qur'an[4] and it is Makki. It is also located in the twenty second juz'.

Sura Fatir is the fifth and the last hamidat suras which start with the praise of Allah. This sura of Qur'an has forty-five verses, 780 words and 3228 letters. Considering its size, this sura is among mathani suras about one hizb (a quarter of a juz').[5]

This sura warns mankind of deceitfulness of life and temptations of Satan that lead them astray. It also states that mankind is in need of God while God is not in need of anyone. Sura Fatir also mentioned the blessings of God[6] like rain, getting married, and the two fresh and salty seas in order to remind mankind of God's blessings and to be grateful to Him.

This sura also discusses resurrection and its situations and repentance of disbelievers who wish they could return to this world in order to compensate their mistakes.[7] In addition, in some verses, disbelievers and their incapable gods are mentioned and it recommended mankind to say prayers, recite Qur'an and spend on others secretly and openly.

In the eighth verse of Sura Fatir, God addressed Prophet Muhammad (s), "do not fret yourself to death regretting for them". Which has the same meaning as the third verse of Qur'an 26.[9][10] Such phrases show how Prophet Muhammad (s) was eager to guide people and convince them to convert to Islam.[11]

Human will in Guidance or Deception

Based on the eighth verse of Sura Fatir, only God leaves to stray whom He wills and guides to whom he pleases[12]. Seemingly, humans have no willpower, but according to Imam al-Hadi's (a) letter which is stated in al-Ihtijaj by al-Tabrisi, this verse can imply one of the two meanings:

However, some exegetes believe there are two steps in guidance and going astray. In the first step God does not force human and they have willpower, but if someone chooses to go astray, he will be punished, which lead to the second stray by the order of God as it is a reflection of the human's disobedience. Therefore the verses which state that going astray is by the will of God are actually about the second misleading.[15]

Considering the verse ten, "To Him ascends the good word, and He elevates righteous conduct"; in hadiths the "good word" is testifying monotheism, prophethood of Muhammad (s), and Wilaya (guardianship) of 'Ali b. Abi Talib (a) and other Imams. Also, the "good deeds" means having a true belief in the mentioned testimony.[16]

Al-Shaykh al-Kulayni stated in his book al-Kafi, that Imam al-Sadiq (a) explained this verse: "This verse is about guardianship of Ahl al-Bayt" and he said it while he was pointing at himself; so those who do not believe in wilaya of Shiite Imams, their deeds will not be accepted by God."[17]

It is stated in the twenty-second verse of Sura Fatir: "Indeed Allah makes whomever He wishes to hear, and you cannot make those who are in the graves hear". Wahhabis have used this verse to reject the concept of tawassul to the departed ones. According to this verse, the departed ones cannot hear us and they cannot help people.[18]

In contrary, Shiite scholars and a large number of Sunni and Sufi scholars believe the dead are living in Barzakh; there are numerous Qur'anic verses which support this notion. They believe that in the verse disbelievers who are impossible to guide are likened to dead people, as for both, the guidance of the prophets is futile.[19] 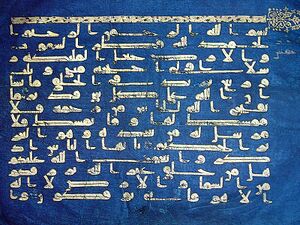 First verses of Sura al-Fatir in Kufic script from a manuscript of late 9th to early 10th century, known as Blue Qur'an

Need of Mankind and Sufficiency of God

This verse is highly regarded by philosophers and mystics.[20] A number of philosophers believe this verse is about Cosmological arguments (Burhan al-Imkan wa al-Wujub) which proves the existence of the Necessary Being.[21] It is stated that only God is the true One, Who is not in need of anyone and existence of Necessary Being in the entire universe is attributed to Him. All the humans, as well as all the creatures, are in need of God, an independent existence, and if their connection to Him is broken, they turn to nothingness.[22]

Each Person is Responsible for His Own Deeds

This verse proves the justice of God and then it explains the severe punishment in the Day of Judgment, so that no one will bear another person's burden or sin, even if they love each other.[23]

The Arabic word "khashiya" (خَشِيَ) means fear of God as well as worshiping Him.[24] It is narrated from Imam al-Sajjad (a) about this verse: "Knowledge and deeds are two close friends, those who know God, they will fear Him, which lead to being obedient to God's orders." Knowledgeable people and their followers are only those who know God well, perform deeds for Him and love Him".[25] It is stated in exegetical and hadith books that the "knowledgeable people" in this verse is attributed to 'Ali b. Abi Talib (a).[26]

As narrated from Prophet Muhammad (s) in Majma' al-bayan, if someone recites Sura Fatir, three doors of Heaven will invite him toward itself in the day of Qiyama, and he can enter from each door he desires.[27] It is also narrated from Imam al-Sadiq (a) in Nur al-Thaqalayn that if someone recites Sura Fatir and Qur'an 34 at night, God will protect him and if someone recite these suras during the day, he will not be harmed and God will give him blessings in the world and in the Hereafter which are unimaginable to him.[28]