This article is an introduction to the Sura al-Qalam; to read its text see text:Sura al-Qalam.

Sūra al-Qalam (Arabic: سورة القلم, the pen) is the sixty eighth sura of the Qur'an. It is a Makki sura, and with respect to its content, it counts as one of mumtahanat. It consists of fifty two verses. It occurs after Sura al-Mulk in the twenty nineth juz' of the Qur'an.

Its contents include assuaging Prophet Muhammad's (s) worries about accusations made by polytheists against him, calling him to be patient, prohibiting him from following the polytheists, and reminding him about their punishments after the resurrection. The verse fifty one of this sura, known as Wa In Yakad Verse, is known as the verse of evil eyes.

Since this Quranic sura involves the word, "al-Qalam" (pen) in its first verse where God has sworn to the pen and what is written by it, it came to be known as "Sura al-Qalam". And since it begins with the disjoined letter, "n" (nūn), it also came to be called "Sura al-Nun" (سورة النون) or "Sura Nun wa l-Qalam" (سورة نون و القَلَم).[1]

Reciters and exegetes of the Qur'an agree that this sura has fifty two verses, 301 words, and 1288 letters. With respect to its volume, it counts as one of the mufassalat suras; it is about half of hizb of the Qur'an.[2]

Many exegetes of the Qur'an take this sura to be wholly Makki, and others take verses seventeen to thirty three as well as verses forty eight to fifty to be Madani and the rest to be Makki.[3]

Themes of this sura can be classified as follows:[4]

Story of the Owners of the Garden

Verses seventeen of Sura al-Qalam onwards report the story of some wealthy people who had a green, flourishing garden in Yemen. The garden was owned by an old man who made a living from it and gave the rest of the products to people in need. After his death, his children decided to take the whole benefits of the garden for themselves and not give anything to the poor people. Because of this, a thunderstorm stroke their garden and set it on fire. As a result, nothing was left from the garden. One of the brothers invited the others to God and they repented from their behavior.

The verse thirty three of this sura points out that arrogance or ignoring needy people has such a punishment as a consequence.[6] 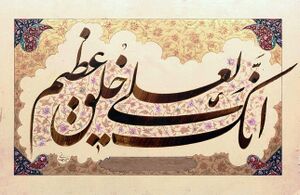 "And indeed you possess a great character."Qur'an 68:4 written in Nasta'liq font, one of the main Persian calligraphy, by Ghulamhusayn Amirkhani

Great Morality of the Prophet (s)

The verse four of Sura al-Qalam is another well-known verse concerning the great morality of the Prophet (s).

Verses fifty first and fifty second of this sura are known as "Wa In Yakad Verse" or the "Verse of Evil Eye". Many people in Iran put boards or cloths containing this verse on the walls of their houses or work places, because they believe that it helps to prevent evil eyes. However, some scholars, such as Morteza Motahhari, believe that this verse, or having it in one's house or work place, is irrelevant to evil eyes, although evil eyes do have effects.[7]

There is a hadith from Imam al-Sadiq (a) concerning the merits of reciting Sura al-Qalam. According to the hadith, if someone recites this sura in his obligatory or recommended prayer, God will protect him against poverty and he will be immune to the pressure of the grave.[8]

According to another hadith, the reward for reciting Sura al-Qalam is equal to that of a person the fulfilment of whose wishes is postponed by God. It is also said that if this sura is written on something and is put on a damaged tooth, one's toothache will calm down then.