Muḥammad ʿAlī al-ʿAmrī (Arabic: محمد علي العمري, b. 1327/1909-10, d. 1432/2011) was a Shiite religious scholar from Medina. He was one of the leaders of Shiites in Saudi Arabia, especially Nakhawila. It is said his lineage goes back to 'Uthman b. Sa'id al-'Amri, a special deputy of Imam al-Mahdi (a). His religious and social influence extended as far as Jeddah and Mecca. Al-'Amri acted as an intermediary representative between the Al Saud government and Shiite community in Medina. He was imprisoned a couple of times and he was also sentenced to execution which he survived. Al-'Amri was the marja' of Shiite Muslims in Saudi Arabia.

Muhammad 'Ali al-'Amri was born in 1327/1909-10 in Medina. It is said his lineage goes back to 'Uthman b. Sa'id al-'Amri, a special deputy of Imam al-Mahdi (a), his son Muhammad b. 'Uthman al-'Amri and eventually it goes back to Khazraj tribe, one of the two main tribes in Medina. Ancestors of Shaykh al-'Amri used to work on farms as well as engaging in religious and scientific activities. That is why his family was called Nakhawila or al-Nakhilayn (those who produce date fruit).

In 1370/1950-1, when Ayatollah al-Sayyid Muhsin al-Hakim became the marja', he ordered al-'Amri to return to Medina and he acted as the leader of Shiites in Medina. He was also the representative of a number of Marja's in that time including: 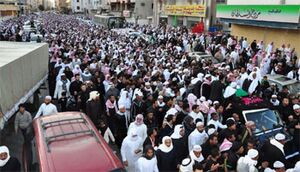