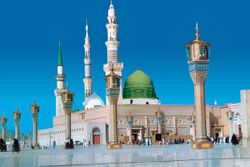 The Shrine of the Holy Prophet (s) in Medina.

Building over graves (Arabic: البناء على القبور) means building any construction or structure over graves. There is a disagreement among Shia and Sunnis with Wahhabis about the Islamic ruling for building over graves. Islamic schools, especially Shia, have built constructions over the graves of great people and Islamic leaders and some Islamic scholars. This – with a conceptual expansion Wahhabis make – has a history and dates back to early Islam. According to historical shreds of evidence, it was not encountered with any objection from the Prophet (s) or the Followers. Wahhabis believe that building over the graves makes the grounds for worshiping them and polytheism in worshiping.

Meaning of Building over Graves

Building over graves, due to the many discussions related to it in fiqh, kalam and history, has become a term. It refers to any construction over graves, including qubba (dome), buq'a (mausoleum), darih, mosque, and even according to some, putting stones around the grave.[1]

The Topic of Discussion and Dispute

The grave of Prophet David (a) in Jerusalem and the graves of Prophets Abraham (a), Isaac (a), Jacob (a) and Joseph (a) in al-Khalil had tall buildings. At the time of the war led by Umar, Muslims did not destroy these graves and buildings.[2] It shows that building over graves was neither reprehensible before Islam nor was it wrong in the views of Muslims in the early centuries of Islam.[3]

The Holy Prophet (s) buried Fatima bt. Asad in a part of the mosque where was known as the grave of Lady Fatima (a) in Islamic history.[4] Contemporary with Hudaybiyya peace treaty, the first construction or mosque was built over the grave of Abu Basir by Abu Jandal, and the Prophet (s) did not stop it while he (s) knew about it.[5]

At the Time of the Companions 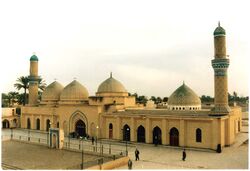 The Grave of Salman al-Farsi in Iraq.

After the Prophet (s) passed away, he (s) was buried in his house, and preserving and repairing this house was made by Muslims and caliphs since the first years after his demise.

The lack of any objections to these reconstructions and expansions of the shrine by Muslims shows the legitimacy of this action and following the conduct of the Prophet (s) by Muslims and the permission for building over graves.[8]

Building over graves was a common action in the views of the Companions. When Al-Mughira b. Shu'ba expanded his house, the grave of Safiyya bt. Abd al-Muttalib, mother of Al-Zubayr b. al-'Awwam, the aunt of the Prophet (s) was located inside the house, so a new structure was built over it.[9] In the house of 'Aqil which gradually turned to become the dedicated place for the graves of Banu Hashim in Baqi' cemetery,[10] the graves of Imams (a) and some companions had shrines.[11] Ibn Athir reported sending an architect by Majd al-Mulk Qummi to repair the shrine and graves of four of Imams (a) and 'Abbas b. 'Abd al-Muttalib.[12] Ibn Jubayr,[13] Ibn Najjar,[14] Khalid b. 'Isa,[15] Ibn Batuta[16] and Awliya Chalapi in different times reported about the existence of some shrines over the graves of Imams (a).[17]

During the Time of the Followers

The graves of Umm Salama and Umm Habiba, the Prophet's (s) wives, had a building over them. The graves of 'Aqil, his nephew, 'Abd Allah b. Ja'far b. Abi Talib, Ibrahim and some other children of the Prophet (s) had mausoleum and dome. Based on the report of Ibn Jubayr, the grave of 'Abbas b. 'Abd al-Muttalib, Imam al-Hasan (a) and Ibrahim, son of the Prophet (s) were higher than the ground level.[18] There are pieces of evidence that show that before 94/713, there was a building over the grave of Ibn 'Abbas.[19]

In the first centuries after Islam, many cases of building constructions over graves and building mausoleums were seen. It happened in many consecutive centuries before the eyes of Muslims while none of the scholars, Shia or Sunni objected to these constructions, and no one believed that it is an act of polytheism or would deviate Muslims toward polytheism and idol-worshiping and worshiping other than God.

The 3rd/9th century was when building domes over graves grew[24] and since the 4th/10th century, visiting them became common. An example of such graves is the grave of Muhammad b. 'Isa al-Tirmidhi (d. 296/892), which possibly belongs to the end of the third/ninth century and early 4th/10th century. [25]

In Aswan region in Nuba, which was one of the battlefields of Muslims with enemies, there are mausoleums from the fourth/tenth and 5th/11th centuries over the graves of the martyrs of those wars.[26] Since the sixth/twelfth century, many tombs were built around the Islamic world.[27] In that century, when Sufism grew among Muslims, building Sufi tombs grew up; such as the tomb of Shaykh Ahmad Jam in Turbat Jam possibly built in 6th/12th century and the tomb of Bayazid Bastami built in 8th/14th century.

According to historical sources, Muslims have preserved and visited these buildings.[28] Thus, the destruction of some buildings by caliphs, such as the destruction of the grave of Imam al-Husayn (a) in 236/851 by Mutawakkil made Muslims upset and repulsive toward his action.[29] The Holy Shrine of Imam Ali (a) in Najaf, Iraq.

The tradition of building mausoleums and shrines over the graves of Imams (a) is another historical evidence Muslims considered by Muslims. The grave of Imam Ali (a) has had a glamorous dome and building, and according to historical reports, its dome and building were built by Harun al-Rashid in 2nd/8th century[30] and it was among old buildings over graves. Muhammad b. Yazid, a Shia ruler of Tabaristan, reconstructed this dome in 287/900.[31] In an ode, Ibn Hajjaj Baghdadi, a poet of the third/ninth and 4th/10th centuries, mentioned the grave and dome of Imam Ali's (a) shrine.[32] The first building over the grave of Imam al-Husayn (a) was built when Mukhtar al-Thaqafi came to power. Later in 371/982, a darih made of teak was placed over the grave by order of 'Adud al-Dawla.[33] Khatib Baghdadi mentioned the grave of Imam al-Kazim (a) among the graves of Quraysh which was visited and made entreaty to by Shias and some Sunni scholars.[34]

Until the half of the second/eighth century, there was a shade over the grave of Lady Ma'suma (a) in Qom.[39] In the second half of the third/ninth century, a mausoleum was built over it by Muhammad b. Zayd, da'i (caller) of Alawis (descendants of Imam Ali (a)).

The brick entrance of the major gate to the shrine of 'Abd al-'Azim was made by Majd al-Din Barawistani, minister of Bakiyaraq Saljuki, in the fifth/eleventh century.[40]

The graves of Imams (a) in Baqi' cemetery, the grave of Banu Hashim and building dome over their graves, and also the grave of 'Abbas b. Abd al-Malik were constructed by order of Majd al-Mulk Barawistani in 5th/11th century[41] and were reconstructed several times by caliphs. According to inscriptions available in these shrines, the first reconstruction was made by the Abbasid caliph Mustarshid Billah in 519/1125, and later in the early 7th/13 century, Mustansir Billah made other repairs in the shrine.

Islamic Ruling of Building over Graves

In the two last centuries, Wahhabis issued a ruling for the destruction of constructions built over graves. The history of this ruling dates back to the seventh/thirteenth century and based on the theories of Ibn Taymiyya (d. 728/1328)[42] and his pupil Ibn Qayyim (d. 751/1350) according to whom, destruction of these constructions and shrines is obligatory. Their first action was the destruction of the shrine and grave of Imam al-Husayn (a) in 1216/1801[43] and then, they destroyed the shrines of Imams (a) in Baqi' in 1221/1806.[44] After reconstruction of destructed shrines, when Wahhabis took control of Hijaz in 1344/1926, they collected rulings of scholars in Medina on the issue and began destroying the mausoleums of the Companions and Infallible Imams (a) in Baqi'.[45] This way, the issue of building over the graves turned into one of the controversial issues in the Islamic world.

However, contrary to the beliefs of this group, other Muslims considered it permissible to build over graves, any construction including a mausoleum, mosque, or school.[46] Shia and some Sunnis[47] consider it in accordance with Muslims' tradition.[48] Some Sunni faqihs, only in some cases, have considered it reprehensible, and some others consider construction over the graves of the Prophets (s), martyrs, and the righteous recommended.[49]

Some Sunni researchers believe that the disagreement made about the issue of construction around graves is because of Wahhabis' carelessness about hadiths prohibiting construction and their lack of attention toward justifications against them. Prohibitions in these hadiths are not general, and they are about special cases and are based on some reasons such as touching the materials of construction with fire, their heaviness on the buried body, or their separation from the graves of other Muslims and preventing the burial of other Muslims near them. According to principles of usul, a ruling which has its justification with it is specific to a certain case; the justification is given for and cannot be generalized for other cases.[50] Moreover, contrary reasons are permitting the construction, which are even stronger in reference and chain of transmission than proscriptive narrations.[51]

Even proscriptive narrations regard this action as reprehensible. However, the graves of religious personalities, the righteous, and martyrs are out of this reprehension because they are considered among religious sacraments, and building mosques and mausoleum over their graves is honoring them because their graves are distinguished and people visit them. According to the glorious Qur'an,[52] upholding religious symbols is a sign of spiritual health and sincerity in intention.[53]

The View of the Qur'an

In the dispute between Muslims and polytheists over the bodies of the People of the Cave, the glorious Qur'an mentions the opinions of both parties. Some suggested building a mausoleum or wall in front of the cave, "they said, 'Build a building over them." (18:21) so that they would be hidden from people's sight. Some others suggested building mosque or temple over their graves, "'We will set up a place of worship over them.'" (18:21)[54]

Finally, they decided to build a mosque over their graves so that people worship God there, and also the work of the People of the Cave would be kept and be blessed by their graves. In these verses, there is no mention of the polytheistic nature of this action, for if building construction or mosque was polytheistic, it must have been mentioned.[55]