Muʿādh b. Jabal b. ʿAmr (Arabic: مُعاذ بن جَبَل بن عمرو) was one of the sahaba, a reciter of the Qur'an, and an opponent of Ahl al-Bayt (a) over the issue of the Prophet's (s) successorship.

Mu'adh pledged his allegiance to the Prophet (s) in the Pledge of al-'Aqaba, and attended the Battle of Badr and the Battle of Uhud. The Prophet (s) sent him to Yemen in order to propagate Islam. Mu'adh b. Jabal was one of those who signed a treaty in Hajjat al-Wada' to the effect that if the Prophet (s) were killed or died, they would not let the caliphate go to Ahl al-Bayt (a).

After the demise of the Prophet (s), Mu'adh was one of the first people who pledged their allegiance to Abu Bakr. It is said that at the time of his death, Mu'adh expressed his regret for not supporting Ali b. Abi Talib (a) as the successor of the Prophet (s).

During the Life of the Prophet (s)

Mu'adh b. Jabal was from the Khazraj tribe, and his father was Jabal b. 'Amr b. Aws.[1] His teknonym was Abu 'Abd al-Rahman. He was one of the Ansar. [2] He pledged his allegiance to the Prophet (s) in the Pledge of al-'Aqaba[3] and was present in the battles of Badr and Uhud. After the Battle of Tabuk, the Prophet (s) sent Mu'adh to Yemen as a teacher of Islamic doctrines as well as his agent there. At this time, Mu'adh was just 28 years old.[4]

During the Caliphate of the First Caliph

Mu'adh b. Jabal is said to be one of those five who signed al-Sahifa al-Mal'una, according to which they promised if the Prophet (s) is killed or passed away, they should not let any of his household become his successor. The parties of this treaty were Abu Bakr b. Abi Quhafa, 'Umar b. al-Khattab, Mu'adh b. Jabal, Abu 'Ubayda al-Jarrah, and Salim Mawla Abi Hudhayfa.[5] It is also said that Mu'adh was one of the first people who pledged their allegiance to Abu Bakr, the First Caliph.[6] During Abu Bakr's caliphate, he was appointed as the ruler of the Jund area in Yemen.[7]

Refusing to Help Fatima (a)

According to al-'Allama al-Majlisi, Fatima al-Zahra (a) asked Mu'adh for help in after the confiscation of Fadak, but he refused to help her.[8] 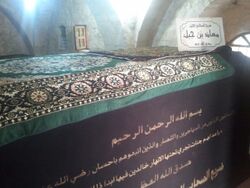 The grave of Mu'adh b. Jabal in al-Shuna al-Shimaliyya, Jordan

Mu'adh returned to Mecca after a while, but he then went to Syria. Finally, he suffered plague,[9] and died during 'Umar's caliphate at the age of 38.[10] He left no progeny. His grave is in "al-Shuna al-Shimaliyya" in Jordan. There are several hadiths in Sunni sources regarding the virtues of Mu'adh b. Jabal.[11]

Regret at the Time of Death

The book Kitab Sulaym b. Qays quoted 'Abd al-Rahman b. Ghanam al-Azdi al-Thumali (Mu'adh's father-in-law) as saying that when Mu'adh was about to die, he expressed his regret for his positions about the successor of the Prophet (s); for not supporting household of the Prophet (s) and supporting, instead, the First and the Second caliphs.[12]