From wikishia
(Redirected from Yathrib) 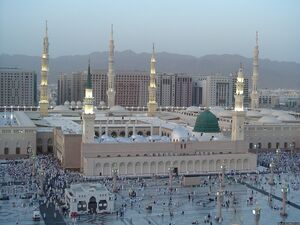 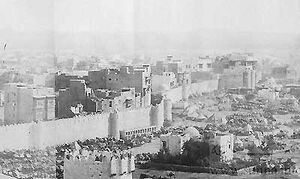 Medina is one of the main religious cities of Saudi Arabia. It had been named as Yathrib before the emigration of the Prophet (s). Medina is located in north east of Mecca in Hijaz region.[1] The distance between Medina and Mecca is 450 Km. Medina is located between a salt marsh and volcanic fields.

Medina wasn't like Mecca in economy, although there was some trade, but it was not comparable to Mecca that had summer and winter trade caravans. Economy of Medina was mostly based upon agriculture and date gardens around it. The most important products of Medina were date and grape; date was the root of their economic life which was used as food and its wood was used in buildings.[3] After all, most of people were not in a good economic situation.[4]

The climate of Medina is good compared to other places of the Arabian Peninsula; the water was available in a shallow depth, so by digging, it could be extracted easily.[5]

Thirteen years after bi'that in the beginning of the month of Rabi' I, the Prophet (s) departed for Yathrib. This emigration was after the two allegiances of Aqaba by people of the city with the Prophet (s) and Islam (s). After staying in Quba' for some days, he went to Medina. The last ten years of the life of the Prophet (s) had mostly passed in Medina and this city was the center of expansion of Islam.[6]

The first action of the Prophet (s) in Medina was building a mosque; a place where, in addition to being a center of worship, became a cultural, political and administrative center; a center which was one of the main bases for Muslims.[7]

The second action of the Prophet (s) was writing a public treaty between Muslims of Medina. In this treaty which all of Muslims accepted, ruling is known only for God and the Prophet (s) and some of civil and criminal rules of Islam had been accepted.[8]

The third action of the Prophet (s) was placing the Pact of Brotherhood between Muslims. The Prophet (s) made Muslims brothers so they would have a closer relation to each other.[9] 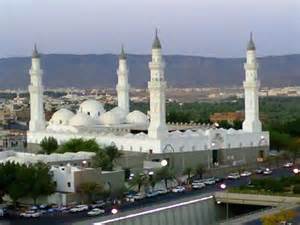 The Prophet (s) said: "Who cleans and purifies himself and comes to Quba' Mosque and prays, will have the reward of an Umra"[25]. 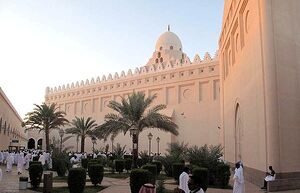 There was a mosque named al-Masjid al-'Arafat or al-Masjid al-'Umra placed in the direction of Qibla from Masjid al-Quba'. The name was because on the Day of 'Arafa when the Prophet (s) was standing there, the earth became flat for him, so he could see the people in 'Arafat.[26]

Mosque of 'Itban b. Malik

Mosque of 'Itban b. Malik had been one of mosques of Quba' region. Ibn 'Itban who was one of Naqibs of Ansar, requested the Prophet (s) to come to his house and pray there, so he could make that place his mosque; this was because sometimes flood prevented him from going to the local mosque. The Prophet (s) went to his house, prayed there, so that place became a mosque.[27]

This mosque is located in the southern side of mosque of Fath. It is said that while Medina was surrounded by pagans during the Battle of Khandaq, this was the place that 'Ali (a) worshiped Allah.[28]

This mosque is also named Radd al-Shams mosque. In the Battle of Banu Nadir, the Prophet (s) has had a tent there and after that a mosque was built there. In some narrations from Ahl al-Bayt (a) it's considered as a mosque which must be visited.[29] 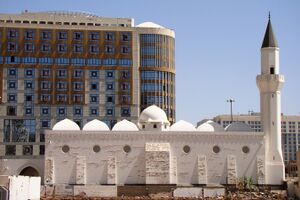 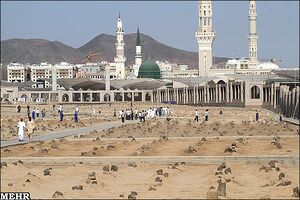 Every time the Prophet (s) was passing by al-Baqi', he said: "peace be upon you from the region of a faithful people, and we will join you, God willing."[32] 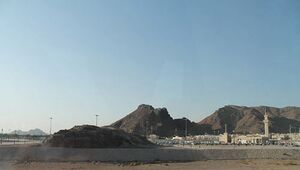 One of famous and important mountains of Medina is Mount Uhud which is placed north-west of the city, five kilometres from al-Masjid al-Nabawi.[33] Among mountains around Medina, this mount is the only separate and single mountain, so it's called Uhud (single).[34] This mountain, with the length of seven kilometers (in east-west direction), is the longest mountain in the Arabian Peninsula, which has high peaks and its width differs from one to three kilometres.[35]

Mountains of the Uhud area witnessed the confrontation of the good and the evil in the first years of Islam; the Battle of Uhud took place on Saturday, Shawwal 7, 3/625. In this area, the martyrs of the Battle of Uhud were buried.[36]

The house in which Imam 'Ali (a) and Lady Fatima (a) were living, was placed besides al-Masjid al-Nabawi. In many Shi'a and Sunni hadiths, this home is mentioned as "Bayt Fatima (a)" or "Hujra Fatima (a)".[37]

The grave of Muhammad b. 'Abd Allah b. al-Hasan b. al-Hasan, known as al-Nafs al-Zakiyya, is located north west of the city near the Mount Sal'.[38]

Banu Qurayza violated their treaty with the Prophet (s) and assisted Quraysh and other polytheists in the Battle of Ahzab. During the battle they ambushed Muslims.[41]

Harra tragedy is the crackdown of the army of Syria, commanded by Muslim b. 'Uqba, on the uprising of the people of Medina, in 63/683. The uprising was against the rule of Yazid b. Mu'awiya led by 'Abd Allah b. Hanzala b. Abi 'Amir. In the tragedy, many of the people of Medina, including eighty of the companions of the Prophet (s) and seven hundred memorizers of Qur'an were killed, and the properties and families of people became plundered.[42]

Muhammad al-Nafs al-Zakiyya led an uprising in the time of the rule of al-Mansur al-'Abbasi in 145/762-3 in Medina. The people of Medina, especially its hadith scholars, including Malik b. Anas supported the uprising and considered the allegiance of Mansur under pressure and compulsion as invalid. In the clash of the two armies, the army of Muhammad al-Nafs al-Zakiyya defeated and he became killed and buried in Baqi'.[43]