Quba mosque was built six kilometer off Medina in village of Quba, which is currently part of Medina. The name of the mosque is taken from the village which was named after a famous well, called Quba.[1]

Before staying in Medina in the first year after Hijra, the Prophet Muhammad (s) accepted requests of people of Quba and ordered to build a mosque there. The Prophet (s) entered this village on twelfth[2] or fourteenth of Rabi' I, he stayed in Quba and helped Muslims to build the mosque in a week.[3] In some sources it is mentioned that 'Ammar b. Yasir proposed the idea of building a mosque in Quba;[4] while some other sources stated that 'Ammar played the main role in building Quba mosque which made him the first Muslim who built a mosque.[5] 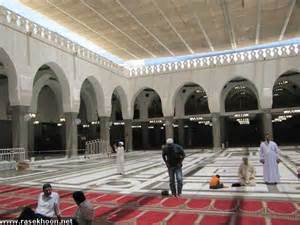 The Prophet (s) said: "If a person perform wudu (ablution) in his house and say prayers in Quba mosque, the rewards of performing an Umra will be given to him."[6]

Quba mosque was rebuilt and developed in the time of caliphate of Uthman b. Affan.[8] The second vast rebuilding took place in the time of 'Umar b. Abd al-'Aziz and it remained unchanged so far.

In 555/1160, Jamal al-Din Isfahani, the minister of Mosul ordered to rebuild Quba mosque. It was also rebuilt and repaired in the eighth and ninth/fourteenth and fifteenth centuries. Quba mosque was later developed in the time of Ottomans and Saudi government. Nowadays it has several sections with domes built on their roofs.[9]

According to large number of interpreters of Qur'an, the mosque mentioned in Qur'an 9:108 is a reference to Quba mosque:[10]

The 108th verse of Qur'an 9 expresses two features for Quba mosque: First Quba mosque is more worthy to say prayer there, and second there are men in this mosque who love to purify themselves.