From wikishia
(Redirected from Manaqib al-imam 'Ali b. Abi Talib (Book))
For other books with similar titles, see Manaqib (disambiguation).

Manāqīb al-Imām ʿAlī b. Abī Tālib (Arabic: مناقب الإمام علي بن أبي طالب) known as Manāqib Ibn al-Maghāzilī (Arabic: مناقب إبْن المَغازِلي), is a work by one of Sunni Muhadiths concerning the virtues of Amir al-Mu'minin (a) and Ahl al-Bayt (a). The book is authored by Abu l-Hasan 'Ali b. Muhammad Julabi (d. 483/1090-1091) known as Ibn al-Maghazili. In this book, the author concerned himself more with the virtues of Imam 'Ali (a), Fatima al-Zahra (a), Hasan (a) and Husayn (a) and less with other Imams (a). Ibn al-Maghazili has cited Shiite and Sunni resources in this book.

Abū l-Hasan ʿAlī b. Muḥammad Julābī is a historian and Muhadith from the city of Wasit in Iraq. 'Julabi' which is the Arabic form of the Persian word "Gulab" (which means rose-water) pertains to the village of Juliabiyya in Wasit. He is also known as Ibn al-Maghazili because one of his ancestors inhabited the 'Maghazilian' area in Wasit.[1] He is also known as Khatīb (orator) because of his orations in Wasit.

Little is known about his life. Some resources have talked about his knowledge of the people (Muhadiths) of Wasit and their hadiths and also his knowledge of jurisprudence. Ibn al-Maghazili's approach to jurisprudence, as his pupil Khumays Hūzī says, is that of Maliki, but some people like Ibn Biṭrīq who knew him from his book, Manaqib, have considered him as a Shafi'i.[2]

The common version of this book has been published edited by Muhammad Baqir Bihbudi as Manaqib al-Imam 'Ali b. Abi Talib and is known by this title. But another print of the book edited by Muhammad Kazim Mahmudi is titled by Manaqib Ahl al-Bayt, since the book is not restricted to the virtues of Imam 'Ali (a) and includes hadiths about the virtues of Ahl al-Bayt (a).

In the introduction of the book, the author speaks about Ahl al-Bayt (a) and their virtues, and takes the appeal to their love as the right path. He has tried to collect their virtues as far as possible. He has dedicated the book to the library of one of the lovers of Ahl al-Bayt (a).[3]

Much of the issues in Ibn al-Maghazili's book are about Imam 'Ali (a)'s virtues, such as his birth in Ka'ba, his precedence in accepting Islam, his going on the Prophet (s)'s shoulders and hadiths such as hadith of Ghadir, Hadith of Manzila (position), hadith of likening 'Ali (a) to Qur'an 112 (Sura al-Ikhlas), hadith of city of knowledge (Madinat al-'Ilm), hadith of returning the sun (radd al-shams), Hadith al-Tayr al-Mashwiy, hadith of closing the doors (Sadd al-Abwab), hadith of thaqalayn (pair of valuable things), Hadith of Wisaya, etc. He also deals with verses of Qur'an concerning Imam 'Ali (a)—such as Al-Ikmal Verse, Mubahala Verse) and Verse of Tathir.

The author has rarely quoted any hadiths about other Imams (a); he has quoted only one hadith about Imam al-Sajjad (a) and Imam al-Sadiq (a).

The author quotes hadiths in a referenced (Musnad) way by citing the chain of narrators, but he does not mention the books he refers to. Most of the people from whom he quotes are muhadiths and scholars of Wasit. Manaqib Ibn al-Maghazili is a mixture of information and reports by Shiite and Sunni writers compiled in this book.[5] 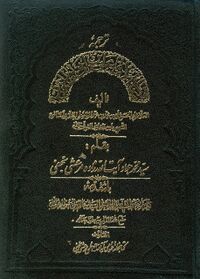 Persian translation of the book by Sayyid Muḥammad Jawād Marʿashī

The book , after it was written, was read for people in the Jami' Mosque of Wasit. Subsequent authors cited him and quoted some contents of his book, authors such as Sam'ani, Zahabi and Ibn Hajar 'Asqalani and others.[6]

So far 6 manuscript copies of Manaqib al-Maghazili have been identified:

The book has been translated into Farsi by Sayyid Muhammad Javad Mar'ashi Najafi. The book is published as Manaqib al-Imam 'Ali b. Abi Talib by Dar al-Adwa' in Beirut and as Manaqib Ahl al-Bayt by the World Assembly of Approximating Islamic Sects in Tehran.