Dakkat al-Qaḍāʾ (Arabic: دَکَّةُ الْقَضاء, literally: Platform of Judgment) was a place in the Mosque of Kufa in which Imam ʿAli (a) served as a judge. There are reports of events and judgments by Imam ʿAli (a) in this place. There are practices exclusive to this place, such as performance of two rakʿas of prayer, Tasbih of Lady Fatima (a), and a particular supplication, which are done together with the practices of the Mosque of Kufa. 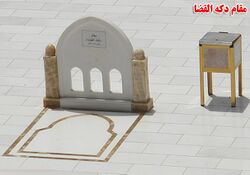 Dakkat al-Qadaʾ (Platform of Judgment) in the mosque of Kufa

Dakkat al-Qadaʾ (Platform of Judgment) was a place in the Mosque of Kufa in the form of a bench or a seat, on which Imam ʿAli (a) served as a judge. Some people believe that there was no shade on this platform, and the verse “was inscribed on its lateral pillar.”

There are practices recommended for Dakkat al-Qada, which is a station in the Mosque of Kufa, including two rakʿas of prayers, tasbihat of Lady Zahra (a), and a specific supplication.

In some sources, this place has been identified with Bayt al-Tasht, and the same practices are cited for both. However, some people believe that although the two places are adjacent, they are distinct, and have cited different practices for each.

In books concerning the virtues of Imams, events are cited about Dakkat al-Qada, including: