Lā Fatā illā Alī (Arabic: لافتی الّا علی) literally means: there is no hero but Ali. This was a virtue of Imam 'Ali (a) to have been thus characterized by Gabriel (Jabra'il) in the Battle of Uhud because of his sacrifice and gallantry. The hadith is cited in both Shiite and Sunni sources.

In the Battle of Uhud when the Prophet (s) was attacked from all sides, Ali (a) wholeheartedly defended him against the attackers. Gabriel descended and praised Imam Ali's (a) gallantry and heroic character. The Prophet (s) agreed with Gabriel and said, "I am from Ali (a) and Ali (a) is from me". Then a voice was heard from the sky, "La sayf illa Dhu l-Faqar, la fata illa Ali, meaning there is no sword but Dhu l-Faqar, there is no hero but Ali".

The hadith is cited in al-Kafi from Imam al-Sadiq (a). According to this hadith, when Imam Ali (a) killed the first unbeliever, Gabriel said, "O Muhammad! This is fairness." The Prophet (s) said, "He is from me and I am from him". Then Gabriel said, "There is no sword but Dhu l-Faqar, there is no hero but Ali".

At the permission of the Prophet (s), Hassan b. Thabit composed the poem ("Gabriel publicly announced…") in this regard.

According to a hadith from Imam al-Baqir (a), the sentence was uttered by an angel called "Ridwan" in the Battle of Badr. According to Ibn al-Jawzi, a Sunni scholar, Ahmad b. Hanbal believed that the story dated back to the Battle of Khaybar. 'Allama Amini appealed to a number of relevant hadiths to show that the event took place several times, and there is a consensus over the event among scholars of hadiths.

Imam Ali's Appeal to the Story

Imam Ali (a) appealed to the story to prove his virtues, "For the sake of God! Did Gabriel said about any of the Immigrants (Muhajirun) and Helpers (Ansar) that, 'O Muhammad! There is no sword like Dhu l-Faqar and there is no hero like Ali'? Is there anybody among the Immigrants and Helpers thus characterized by Gabriel?" 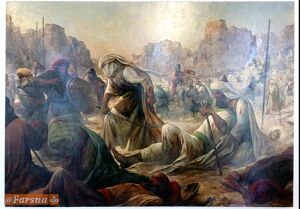 The sentence features in artworks. George Jordac says, "I grew up in a Christian family. My father was a stonemason. He had installed a stone on top of our house which read, "La fata illa Ali, la sayf illa Dhu l-Faqar." Persian poets have alluded to this sentence in their poems. The sentence was minted on a silver coin in Iran in Nowruz of 1956.