ʿAlī b. Mahziyār al-Ahwāzī al-Dawraqī (Arabic:علی بن مهزیار الأهوازی الدورقی) was among close companions of Imam al-Jawad (a) and Imam al-Hadi (a) and was their agents in some regions. He was also a hadith scholar and among distinguished leaders of Shi'a in the early 3rd/ninth century. He was known as al-Ahwazi and al-Dawraqi.

He was, at first, Christian, and afterward, with his father accepted Islam and became famous in worshiping and knowledge and defended the school of Ahl al-Bayt (a). He had communications with Imams (a), and in a letter, Imam al-Jawad (a) praised him. There are different opinions about his burial place, and two tombs in Jajarm and Ahwaz (both in Iran) are attributed to him.

His father, called Mahziyar, was Christian and was from India who became Muslim and then settled in one of the villages of Ahwaz. Ali b. Mahziyar together with his father became Muslim when he was a teenager.[1]

In different sources, his teknonym is mentioned as Abu l-Hasan and his title said to be Ahwazi or Dawraqi[3] because he was from Dawraq, his home city currently in Khuzestan province.[4]

About his characteristics, it has been mentioned that "In the dawn, he prostrated for God and did not raise his head until he prayed for a thousand ones of his religious brothers.[7] Thus, his forehead had calluses like the ankle of a camel due to many long prostrations and worshipping before God."[8]

He was among the interpreters of the Qur'an in the 3rd/ninth and wrote more than thirty books and treatises in different fields of Islamic studies.[9] His name is mentioned in the chains of narrators of about 437 hadiths.[10]

Connection with Imams (a)

Ali b. Mahziyar has narrated hadith from Imam al-Rida (a).[11] He was among the close companions of Imam al-Jawad (a) and Imam al-Hadi (a)[12] and was their agent.

In a letter, Imam al-Jawad (a) praises Ali b. Mahziyar as following,

"O, Ali! I tested you in following and performing orders, well-wishing, and advising (and you were successful in them.) Thus, if I say that I did not see anyone like you, I may be right. May God reward you with paradise and those high positions you do not know. I did not overlook your position and your services in the cold and the hot times. I ask God that on the Day of Judgement, when He gathers everyone, makes His creatures love you so much you become a cause of envy. Indeed, God hears all prayers…"[13]

Also, in reply to one of Ali's letters, Imam al-Jawad (a) wrote,

"But about the supplication you asked me; you do not know how God has put you before my eyes, because of my love for you, I sometimes mention your name in my du'as. May God makes permanent the sustenance He has provided for you, and through my contentment of you, He also becomes pleased with you and fulfills your wish and hosts you in the great paradise by His mercy. May God keeps you safe and loves you."[14]

Ali b. Mahziyar was also a deputy of Imam al-Hadi (a), and some letters have been issued by Imam (a) for Shi'a regarding his truthfulness and righteousness.

His Defense of Twelver Shia School

According to al-Najashi, Ibn Mahziyar had debates with Ali b. Asbat, whose religion was Fatahi and they exchanged ideas about some issues. Finally, they went to Imam al-Jawad (a) to settle their discussion, and Ali b. Asbat returned from his wrong beliefs.[15]

Related to the Qur'an: About the Qur'an, he wrote two books of Tafsir and Huruf al-Qur'an.[16]

Historical: He wrote some books about the life of the Prophets (a).[17] Sayyid b. Tawus mentioned his Malahim.[18]

Al-Khoei mentioned his teachers and those from whom he narrated hadiths more than fifty people.

In the Views of Great Personalities

About him, al-Shaykh al-Tusi has written that, "he was a trustworthy scholar who had resolute and correct beliefs. He was considered among the companions of Imam al-Jawad (a) and Imam al-Hadi (a)."[21]

Al-Kashshi who was a famous scholar in Rijal, remembered Ali b. Mahziyar as, "Ali b. Mahziyar was Christian, but God the Almighty guided him. He was from Hend (Hendijan), which was a village of Fars province and later settled in Ahwaz."

There is no precise information about the date of Ali b. Mahziyar's demise, but the year of his demise is estimated at about 254/868.[22] 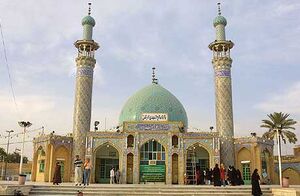 Attributed tomb of 'Ali b. Mahziyar in Ahwaz

Some believe that his tomb is the one in Ahwaz. The other grave is two kilometers from Jajarm in the middle of the cemetery of the city; people believe that it belongs to Ali b. Mahziyar.

Their reasoning is the similarity of the names of Ali b. Mahziyar and Ali b. Ibrahim b. Mahziyar and also mentioning some hadiths beginning with "Qal-a ibn Mahziyar" [said Ibn Mahziyar] made some scholars of Rijal make a mistake and consider the two as one person. People of Jajarm who made exhumation for repairing his grave found the body fresh, and their beliefs became stronger and make great nadhrs. They also found the original gravestone on which it was written, "Hadha marqad-u Mahziyar" ["This is the grave of Mahziyar"] and a part of the gravestone was unreadable. It seems that the grave in Jajarm belongs to Ali b. Mahziyar and the tomb in Ahwaz belongs to Ali b. Ibrahim b. Mahziyar.[23]