ʿUyūn akhbār al-Riḍā (a) (Arabic: عيون اخبار الرضا), also known as 'Uyun al-akhbar (Arabic: عيون الأخبار), is a hadith reference about Imam al-Rida (a) compiled by the great Twelver Shi'a scholar, al-Shaykh al-Saduq (d. 381/991-2). The hadith collected in this book are either the Imam's (a) own sayings or that which he has quoted from his forefathers (a). This book is among the most important Shi'a references, covering topics such as history, jurisprudence (fiqh), ethics and theology. 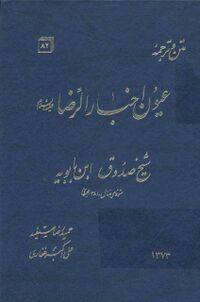