Ḥadīth of Tashbīh (Arabic: حديث التشبيه, similitude) or Ḥadīth al-ashbāh (Arabic: حديث الأشباه) is a hadith from the Prophet (s) in which Imam 'Ali (a) is said to be similar to the prophets. On this hadith, Imam ʿAli (a) is said to have Adam’s knowledge, Noah’s piety and peace-seeking, Abraham’s patience, Moses’s solemnity and genius, David’s asceticism, and Jesus’s worship. The hadith is cited in Shiite and Sunni sources from the Prophet's companions such as 'Abd Allah b. 'Abbas, 'Abd Allah b. Mas'ud, Abu l-Hamraʾ, and Anas b. Malik.

The hadith is deemed valid by Shiite scholars, but it was rejected by some Sunni scholars. Volume 16 of Aqabat al-anwar is devoted to a consideration of the chain of transmission and implications of the hadith. 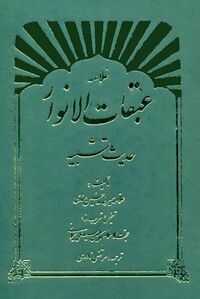 A summery of the book Aqabat al-anwar, "Hadith Tashbih"

The Hadith of Similitude is a hadith from the Prophet (s) in which some of Imam ʿAli’s virtues are assimilated to those of the prophets. The hadith is cited in Shiite and Sunni sources in different wordings.

In certain sources, ʿAli (a) is said to have Israfil’s solemnity, Gabriel’s greatness, and Michael’s status.

The hadith is also called Hadith al-Ashbah (hadith of the similar).

Qadi Nur Allah al-Shushtari and Mir Hamid Husayn have collected the transmitters, chains of transmission, and various wordings of the Hadith of Similitude.

Aspects of ʿAli’s Similarity to the Prophets

The Hadith of Similitude is said to attribute the moral characters of the prophets and the characteristics of the chosen people to Imam ʿAli (a).

Muhammad b. Yusuf al-Ganji al-Shafi'i, a Shafi'i scholar in the seventh/thirteenth century, suggests that ʿAli’s similarity to Adam (a) with respect to knowledge is because, according to verse 31 of Qur'an 2, God taught the properties of everything to Adam (a). Similarly, ʿAli (a) had knowledge of all events and accidents. Moreover, ʿAli’s similarity to Noah (a) with respect to wisdom or judgment was because the former was hard and strict on disbelievers and kind to believers, just like Noah (a). Moreover, since Abraham (a) is described in the Quran as forbearing, ʿAli (a) is assimilated to him with respect to patience and forbearance.

Ahmad b. Mihammad al-ʿAsimi, a Sunni scholar in the fourth and fifth centuries, cites the Hadith of Similitude in his Zayn al-fata, and then elaborates upon Imam ʿAli’s similarities to Adam (a), Noah (a), Abraham (a), Joseph (a), Moses (a), David (a), Solomon (a), Job (a), John (a), Jesus (a), and Prophet Muhammad (s).[1]

Al-Allama al-Majlisi devotes a section of his Bihar al-anwar to the hadiths concerning the similar virtues of ʿAli (a) and other prophets.

A number of Shiite scholars believe that the Hadith of Similitude implies Imam ʿAli’s superiority to other people, which in turn entails his entitlement to imamate and caliphate. Moreover, some people maintain that the Hadith of Similitude is evidence for Imam ʿAli’s superiority to all the prophets except Prophet Muhammad (s), since he had all peculiar virtues of all the prophets, and one who has all the virtues is superior to those who have some of the virtues.

Mir Hamid Husayn presents twenty arguments for the claim that the Hadith of Similitude implies Imam ʿAli’s equality with the prophets in the relevant characteristics. In his view, such equality constitutes evidence for Imam ʿAli’s superiority to the prophets and other people.

Transmitters of the Hadith and Its Validity

Shiite hadiths believe that the Hadith of Similitude is valid and reliable. Indeed, they have cited the hadith as evidence for certain claims. Sultan al-Waʿizin al-Shirazi, the author of Shabhayi Peshawar (Peshawar’s nights), believes that Hadith al-Tashbih is a matter of consensus between Shiite and Sunni scholars. In his Aqabat al-anwar, Mir Hamid Husayn cites the hadith from forty Sunni scholars of hadith, and thus, establishes its authenticity.

Some Sunni scholars have raised objections against the validity of the hadith, however. The Hadith of Similitude is deemed a munkar hadith (a type of unreliable hadith) by Shams al-Din al-Dhahabi, a Salafi historian and scholar of hadith in the eighth/fourteenth century, Ibn al-Hajar al-ʿAsqalani, a Shafi'i historian and scholar of hadith in the eighth and ninth/fourteenth and fifteenth centuries, and Ibn al-Kathir, a Sunni scholar in the eighth/fourteenth century. Ibn al-Jawzi, a Sunni scholar of the sixth/twelfth century, believes that the Hadith of Similitude was fabricated. However, according to some people, since the hadith was transmitted through diverse chains of transmission, it is reliable, even if its chains are individually weak.

Hadith al-Tashbih is discussed in a number of works. Mir Hamid Husayn devotes the sixteenth volume of his book ʿAqabat al-anwar fi imamat al-aʾimmat al-athar to a consideration of the chains of transmission and content of this hadith.