Shabhā-yi Pīshāwur dar difaʿ az ḥarīm-i Tashayyuʿ (Persian: شبهای پیشاور در دفاع از حریم تشیع, translated title: Peshawar nights) is book containing debates between the Shi'a scholar, Sultan al-Wa'izin Shirazi (1314/1897 - 1391/1971) and Sunni scholars. The book is written in Persian and is easy to comprehend. It was first published in some local newspapers of Peshawar in Pakistan in an unorganized way. In his debates, Sultan al-Wa'izin appealed to reliable Sunni sources, such as al-Sihah al-Sitta and Musnad Ahmad b. Hanbal.

This book has been translated in English.

Sultan al-Wa'izin al-Shirazi was born on Dhu l-Qa'da 7, 1314 (April 9, 1897) in Tehran. He went to al-'Atabat al-'Aliyat to learn Islamic disciplines. He traveled to many places abroad, such as Egypt, Syria, Lebanon, Jordan, Palestine, and India. His most important travel was to Peshawar in which his well-known debates with Sunni scholars occurred.

In his sojourns in different areas of the world, Sultan al-Wa'izin held meetings of preaching and sermons, and debated with scholars of different Islamic sects. He debated with some Indian scholars in a meeting where Gandhi was present. He finally died on Sha'ban 17, 1391 (October 8, 1971) at the age of 75 in Tehran, and was buried in the Abu Husayn Cemetery in Qom.

Many scholars, such as Sayyid Husayn Tabataba'i Burujirdi, admired him for writing the book, Shabha-yi Pishawur.

According to the author, he published his debates in order to defend Shiism against secularist thinkers. The author frequently emphasizes that he wrote the book to propagate imamate and to reply to objections made by Sunni Muslims for centuries. He published the book with no financial benefits.

Shabha-yi Pishawur is a transcription of 10 debates between Sultan al-Wa'izin and Sunni scholars. The debates were held in Peshawar in the house of Mirza Ya'qub 'Ali Khan Qizilbash, an important figure in Pakistan. The debates lasted for 10 nights. According to Sultan al-Wa'izin, in the last night of the debates 6 Sunni figures and merchants converted to Shiism.

Sultan al-Wa'izin published the book on the basis of reports that were printed in the press. The debates in Shabha-yi Pishawur are chronologically ordered.

According to the author, the issues he raised in these debates were extracted from the Qur'an, reliable hadiths, remarks by scholars, and religious scholars.

One advantage of the book is that from its first page to the last, no appeal is made to Shiite hadiths, except a few hadiths cited from Shiite scholars which were accepted by them (as you can see in the first pages of the book), and I replied to Sunni scholars from the tongue of their scholars. 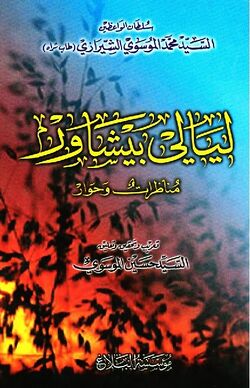 The 35th print of Shabha-yi Pishawur in 1372/1952 by Dar al-Kutub al-Islamiyya includes 4 prefaces by Sultan al-Wa'izin Shirazi in 1059 pages. The first 92 pages are the author's prefaces. The main body of the book is from page 93 through 1016. The last 45 pages of the book contains permissions received by Sultan al-Wa'izin from Shiite scholars, as well as the book's contents and indexes.

The book was translated into Arabic in 1419/1998 by Husayn Musawi under Layali Bishawur, munazirat wa hiwar (Peshawar nights, debates and dialogues). The book includes a preface by the translator, an introduction about a journey to Sialkot in Pakistan, about Peshawar, and advantages of minbar. It is then followed by a translation of Sultan al-Wa'izin's meetings in 10 nights of the Sha'ban month.