Some reports mentioned that his relatives were living in Hamadan, and historical sources and documents show that he had an Iranian identification card, thus it is concluded he was Iranian.

On the other hand, some reports mentioned that Al-Sayyid Jamal al-Din al-Asad Abadi did not consider himself an Iranian and Shi'ite, in order to work on unity of Islam and he could be able to interact with other Islamic sects including Sunnis. In an interview Al-Sayyid Jamal al-Din stated: "I am an Afghan, the purest race of Iranian."

Al-Sayyid Jamal al-Din al-Asad Abadi started learning Qur'an from his parents when he was six years old. He also learnt basic Arabic language in his early years. Then along with his father, Al-Sayyid Jamal al-Din migrated to Qazvin in 1264/1848 when they lived for four years. When he was in Najaf, he learnt Arabic Literature, Logics, fiqh and usul. In 1266/1850 he migrated to Tehran, where he studies under Al-Sayyid Muhammad Sadiq al-Tabataba'i al-Hamadani, who was the Mujtahid of the time.

Before Al-Sayyid Jamal al-Din al-Asad Abadi return to Najaf in 1266/1850 he stayed in Brujerd for a while in order to have scientific discussions with scholars of the city. He studied under Al-Shaykh al-Ansari for four years in Najaf. Later he planned to travel to Bombay in India in 1270/1853-4 Some historians stated that Al-Sayyid Jamal al-Din al-Asad Abadi travel to India in 1282/1865-6 in order to build relationships between Islamic governments and nations; this plan was led by the Ottoman Sultan. First he talked with Madhat Pasha and asked him to send letters to India, Baluchistan and Afghanistan.

After the travel of Al-Sayyid Jamal al-Din al-Asad Abadi to India, his life and personality changed drastically. He became familiar with the problems of Shi'ite Muslims in India and proposed unity of Muslims and condemnation of colonization as the solution which will lead to development of Shi'ites. Then he started traveling to other Muslim and European countries where he stayed for a short while and preached his thoughts.

Al-Sayyid Jamal al-Din al-Asad Abadi became hugely influential among young Egyptians around 1871–1873. He continued his cultural and media-related activities and engaged in Freemasonry system in Egypt in order to develop his political theories and plans. In 1875 he requested to join the Freemasonry in Cairo. According to a letter from a member of the Eastern Lodge, he was recommended to be the head of the Lodge. As it is said Al-Sayyid Jamal al-Din al-Asad Abadi was immediately accepted as a member. When Edward VII, the King of England, joined Freemasonry and the Italian Lodge welcomed him warmly, Al-Sayyid Jamal al-Din decided to leave them to show his discontent.

Shafiq: When Al-Sayyid Jamal al-Din al-Asad Abadi traveled to Hyderabad, the center of all exiled Indians, in 1296/1879 He started publishing a journal called Mu'alim Shafiq in Persian and Urdu.

It is said Al-Sayyid Jamal al-Din evolved Egyptian Literature as it was aristocratic work praising the Kings and Emirs and it changed to works for people.

Foundation Al-Watani party was one of the significant actions taken by Al-Sayyid Jamal al-Din in Egypt. It became successful by means of huge efforts made by Al-Sayyid Jamal al-Din and his students. According to Lord Cromer, an English counselor in Egypt, due to activities of Al-Watani Party the influence of England was reduced by 45% in Egypt and business trades between the two countries was also reduced by 35%. In addition, Du'at Nasara center stated that after 35 years of promoting Christianity all over Africa, comparing to Al-Watani's activities, their supporters are one to sixteen in comparison. One of the Nazarene preachers in Cairo was surprised to see expansion and influence of Al-Sayyid Jamal al-Din's thoughts in Al-Watani Party.

However, colonizers were terrified of the situation and the influence of Al-Sayyid Jamal al-Din in Egypt. They tried their best to stop intellectual and political activities of Al-Watani Party and finally after about nine months they closed the Party's office.

After leaving Egypt, instead of staying in Iran, Al-Sayyid Jamal al-Din preferred to travel to India and stay in Hyderabad, where he continued his activities. He gave speeches to young people, cooperated with media, founded a secret community called "al-'Urwa" and showed his disagreement with Sir Sayyid Ahmad Khan.

A Letter to Mirza Shirazi

In his letter to Mirza al-Shirazi, Al-Sayyid Jamal al-Din called Nasir al-Din Shah a weak-willed and evil man who is not able to defend public interests and granted tobacco concession to enemies of people. He also mentioned eight treacheries of Nasir al-Din Shah which damaged financial properties of country and they were granted to foreigners. Al-Sayyid Jamal al-Din encouraged Mirza al-Shirazi to break his silence and make a crucial decision to oppose Shah.

In his letter to religious leaders in Iran, Al-Sayyid Jamal al-Din clearly asked them to remove Shah and oppose his regime: "Oh, knowledgeable men, do not hesitate a second about removing Shah from his office who has usurp power wrongly. Nasir al-Din Shah's deeds are wrong and his orders are cruel. After putting people in misery and poverty, now Nasir al-Din Shah wants to grant an Islamic country to foreigners. I am going to tell you again that ministers, military chiefs, classes of society are running out of patience and they are waiting for you to take action."

Political and Historical Letters and Documents: a large number of Al-Sayyid Jamal al-Din's letters which were sent to cities like Tehran, Kermanshah, Baghdad, Basra, Moscow, Saint Petersburg, Istanbul, Paris and London are available; their contents are mostly critical and political. This book includes fifty letters and historical documents in Turkish, Persian and Arabic.

Collection of Rasa'il and Articles: It includes more than thirty Risalas and letters which are written by Al-Sayyid Jamal al-Din himself and some are stated by him and Muhammad Hasan Aqa Amin al-Darb al-Thani wrote them. It also contains a number of stories told by Al-Sayyid Jamal al-Din which are published by Abu al-fadl Qasemi for the first time. Its original and handwritten version is kept in the Library of Parliament of Iran.

Al-Rasail wa al-maqalat: It is a collection of twenty two articles and Risalas in Arabic such as Risala on al-Mahdiya, Al-Sharq wa al-Sharafayn, Al-Rad ala Reynan. A number of them are recently published in Al-Yawm al-Thabi' Journal in Paris and Al-'Alam Journal in London.

History of Iran and History of Afghanistan: It is written by Al-Sayyid Jamal al-Din al-Asad Abadi himself.

Diya' al-Khafiqin: Al-Sayyid Jamal al-Din wrote a number of articles in this journal. It was published by Kolbeh Shuruq in collaboration with Islamic Research Center. After releasing five volumes it was banned to get published in England.

Morteza Motahhari in his book, A Brief Analysis on Islamic Movements in Recent Century, mentioned the problems of Islamic societies as:

He insisted that Muslims should forget their differences in the aspect of religious sects or denominations and they have to tolerate each other for the sake of goodness of Islam and unity of Muslims. Al-Sayyid Jamal al-Din advised Muslims to learn and achieve modern technology and knowledge while they are loyal to their religious and ethical values. He was mostly concerned about the differences and disunity among Muslims as well as Muslim rulers. 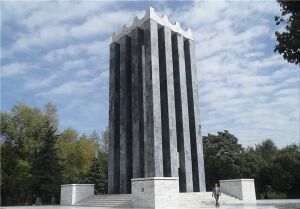 His tomb in Kabul University, Afghanistan

Al-Sayyid Jamal al-Din al-Asad Abadi passed away at the age of sixty in March 1897 in Istanbul. He was buried in cemetery of grand figures. Later the government of Afghanistan asked Ottomans to send his remains to be buried in Kabul, which was accepted by them. Al-Sayyid Jamal al-Din's remains were buried in Kabul University where a huge mausoleum was erected there for him in the time of Muhammad Zahir Shah.

Imam al-Khomeini regarded al-Sayyid Jamal al-Din as a decent man who made huge efforts but did not reach the expected result due to lack of influence among people and religious leaders.

Muhammad 'Abdu described al-Sayyid Jamal al-Din as a knowledgeable and insightful person who could understand the situation of religion and society. As he said: He was a grand theologian who inspired poets and revived intellectuals to seek their ways out of darkness.

Muhammad Iqbal Lahuri regarded al-Sayyid Jamal al-Din as an insightful person in Islamic countries who used up his fruitful experience to link the past to the future.

Sayyid 'Ali Husayni Khamenei said al-Sayyid Jamal al-Din was the man who stimulated the idea of retuning to Islamic government and the system of Islam. He was the first one who explained colonization to Muslims, his activities and political fights are incomparable to his likes in that time.

Morteza Motahhari stated that al-Sayyid Jamal al-Din al-Asad Abadi has deeply inspired informative movements of the past century and he brought awareness to Islamic countries.