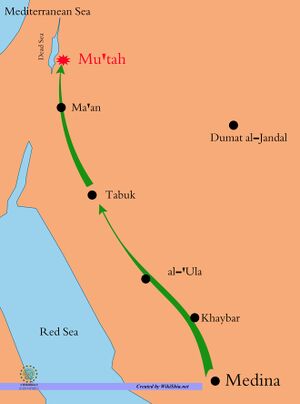 The Battle of Mu'ta (Arabic:سرية مؤتة) was one of the major Sariyyas (military expeditions) in the early Islamic period in 8/629 between the Islamic army and the Roman army. The commanders of the Islamic army were, respectively, Ja'far b. Abi Talib, Zayd b. Haritha, and 'Abd Allah b. Rawaha, all of whom were martyred in this war. After the martyrdom of all of their commanders, and because of the greater number of Roman soldiers, Muslims retreated to Medina under the leadership of Khalid b. Walid.

Mu'ta is a village of the villages of Balqa' on the boundaries of Syria. Today it is located in Province Mu'ab.

On the cause of the Battle of Mu'ta, al-Waqidi writes: the Prophet (s) sent Harith b. 'Umayr al-Azdi al-Lahabi with a letter to the king of Busra[Note 1]. On his way to Busra, he was captured and killed in Mu'ta by the orders of the ruler of Mu'ta, Shurahbil b. 'Amr al-Ghassani. He was the only emissary of the Prophet (s) who was killed. The Prophet (s) heard the news and mobilized people. It seems that he asked them to gather in an army camp without having chosen a commander yet.

When the army was departing, people bid farewell to them and prayed for them. In a sermon, the Prophet (s) said:

Then the Prophet (s) accompanied the Army of Islam to Thaniyyat al-Wada'; he then stayed there and the army stood around him. The Prophet (s) told them: "Depart in the name of God and fight the enemy of God and your enemy in Syria. You will see people who worship God in their monasteries; do not encroach upon them, and you will see people whose heads are Satan's nests; decapitate their heads with swords… Never kill women, children and the elderly; never set palm groves to fire; never cut trees, and never destroy houses".

On the Way to Syria

The Muslims went out of Medina and they camped in Wadi l-Qura. The enemy learned about their path. The ruler of Mu'ta, Shurahbil b. 'Amr al-Ghassani, the murderer of Harith b. 'Umayr al-Azdi al-Lahabi, gathered his army and equipment, and then he sent the pioneers of his army to fight the Muslims under the commandership of his brother, Sadus, who was killed in the fight. Shurahbil sent another brother of his, Wabar, to command the army, but he feared the army of Muslims and refuged to the fort. The Muslims went further and camped in Ma'an which was a territory of Syria.

According to Aban b. 'Uthman's book, the Muslims learned about the huge number of their enemies consisting of Lakhm, Judham, Belli, Quda'a, Arabs and non-Arabs. The enemy moved to the area of Musharif, under the commandership of a person called Malik b. Zafila from the Belli tribe.

When Muslims learned about where the enemy was camping, they resided in Ma'an for two nights in order to think of a plan. Some of them said that we should send a letter to the Prophet (s) and let him know about the number of the enemies, so that he sends an aiding army to us or gives another command. But 'Abd Allah b. Rawaha consoled people and said: "I swear to God that what you dislike is what you have departed for and what you are seeking (martyrdom). We do not fight with reliance on our number and our armaments. We fight with the reliance on the religion with which God has honored us. We fight with the enemy to achieve one of the two excellences: victory or martyrdom". The army said: "Ibn Rawaha is right".

The Muslims moved forward until they arrived in Balqa' near the village of Musharif, where the army of Heraclius resided, consisting of Romans and Arabs. From there the Muslims went to another village in the area of Balqa', called Mu'ta. The enemy approached them until they encountered in Mu'ta. The Muslims were prepared and stood in lines. They elected Qutba b. Qatada al-'Udhri as the commander of the right wing and 'Ibaya b. Malik al-Ansari as the commander of the left wing.

Al-Waqidi has narrated from Abu Hurayra saying that: "when we encountered the unbelievers in Mu'ta, we saw things that we had never seen before. Their number was very great with a lot of weapons and armaments, animals, silk and gold that were mesmerizing. Thabit b. Aqdam told me: what is wrong with you, Abu Hurayra? It seems as if you have seen a great number of people. I said: yes. He said: if you were in the Battle of Badr, you could see that we did not win the war by virtue of our number". The tomb of Ja'far b. Abi Talib, the second commander of the Muslim army in the Battle of Mu'ta

There is a hadith in which Imam al-Sadiq (a) says: "When polytheists and Muslims encountered in Mu'ta, Ja'far b. Abi Talib was on a horse; he got off the horse and then slaughtered it, and he was the first Muslim who slaughtered his horse".

Ibn Ishaq writes: "Ja'far was fighting while saying that: good for those who approach the heaven which is clean with tasty water, and Romans come close to the Divine punishment; they are unbelievers without any authenticity, and I am obligated to hit them with my sword".

Ibn Hisham writes: After Ja'far was martyred, Zayd b. Haritha took the commander's flag and they continued the fight. The Muslims were still in organized lines until Zayd was martyred by a spear. Then 'Abd Allah b. Rawaha took the flag. It seems that he had some reservations, which was why he blamed himself. At this time he heard his soldiers crying for help; he got off his horse and went to help and fought until he was martyred.

According to al-Waqidi, when 'Abd Allah b. Rawaha was martyred, the Muslims were defeated and they escaped. At this time, Thabit b. Aqram, one of Ansar, went to the flag and took it, crying: "Everyone gather around me!" Some people gathered around him. At this time Thabit saw Khalid b. Walid and told him: "O' Khalid! Come and take the flag!" Khalid said: "you are older than me and you have fought in Badr". Thabit said: "O' man! Take the flag! I swear to God that I just took it to lend it to you." Khalid took the flag. The enemy was attacking from all around until he and his soldiers could make them retreat a little. However, more people joined the enemy and the Muslims had to retreat and they were chased by the enemy. Qutba b. 'Amir shouted: "O' people! We had better be killed in our face than be killed from behind while we are fleeing" but nobody listened to him.

The Prophet (s) in Medina

Aban b. Ahmar al-Bijli al-Kufi has narrated from Imam al-Sadiq (a) that the Prophet (s) was in the mosque when he had the vision of Ja'far b. Abi Talib fighting the unbelievers and being martyred. The Prophet (s) told people: "Ja'far is martyred and his stomach is torn apart".

According to al-Mahasin al-Barqi, Imam al-Sadiq (a) said: when Ja'far was martyred, the Prophet ordered Fatima al-Zahra (a) to go to Asma' together with some other women and stay with her for three days and make foods for her. This turned into a tradition in which people made foods for the mourners for three days.

Al-Shaykh al-Saduq cites a hadith according to which, after the martyrdom of Ja'far b. Abi Talib and Zayd b. Haritha, the Prophet (s) cried a lot when went home, saying that: they were my companions and friends, and they were martyred together.

After some days the news came according to which these people were martyred exactly in ways that the Prophet (s) had described.

According to al-Waqidi, people of Medina visited the fighters of Mu'ta with scorn, and some of the fighters were not welcome even in their houses. When they knocked on the doors of their own houses, their households did not open the doors, telling them: "have you returned with all your companions?" But the Prophet (s) told them that: "you have retreated to attack the enemy once again".

In addition to Ja'far b. Abi Talib, Zayd b. Haritha and 'Abd Allah b. Rawaha, some other people were also martyred in Mu'ta, including from Quraysh: Mas'ud b. Aswad al-'Udwi and Wahb b. Sa'd b. Abi Sarh, the brother of 'Abd Allah b. Sa'd. And some people of Banu Najjar from the Khazraj tribe were martyred, including: Suraqa b. 'Amr, Jabir b. 'Amr and his brother, Abu Kilab or Kulayb, 'Amr b. Sa'd and his brother 'Amir b. Sa'd and Harith b. Nu'man b. Assaf or Yassaf.

The battle occurred in Jumada I, 8/September 629.

The Battle of Mu'ta was an operation by Muslims in order to identity the fighting styles of the Roman armies and their allies, and the information that Muslims gained from this battle was very helpful in their future wars. Thus the loss of this battle for Muslims is nothing in comparison with their gains. They were successful in the identification of the fighting styles, organizations and the warfare of Roman armies and their allies, which was key to the Muslims' victories in their future battles.