ʿIzz al-Dīn Abū Ḥāmid ʿAbd al-Ḥamīd b. Hibat Allāh (586-after 650/ 1190-1252) (Arabic:عِزّالدین ابوحامد عبدالحمید بن هبةالله) known as Ibn Abi l-Ḥadīd, was a poet, literary man, and commentator of Nahj al-Balagha who lived in the 7th/13th. He was Shafi'i in fiqh and was Mu'tazili in usul al-din (principles of faith). However, he believed that Imam 'Ali (a) was superior to the other Rashidun Caliphs, and that anyone who revolts against him, is a rebel, fasiq (someone who openly commits a sin and practically disobeys Allah's commandments), and an infernal, unless he repents of his deeds. Al-'Ayniyya, a qasida (a style of composing a poem) which he composed to eulogize Imam 'Ali (a), is written with gold in the margin of the Imam's (a) darih.

He got his position as clerk in the secretariat, because he was a friend of Ibn 'Alqami (d. 656/1258), Shi'i Minister of al-Musta'sim, the last 'Abbasid Caliph. Therefore his two works, Qasa'id al-sab' and Sharh Nahj al-balaghah (Commentary on Nahj al-balagha) are dedicated to Ibn 'Alqami.

In 642/1244-5, Baghdad was set upon by the Mongols, but 'Abbasid army which was commanded by Sharaf al-Din Iqbal al-Sharabi who was Musta'sim's commander in chief, defeated the Mongols. Ibn Abi l-Hadid believed that this triumph was gained by Ibn 'Alqami's expedient, therefore he composed a qasida to pay tribute to Ibn 'Alqami. Some verses of this qasida are found in Comments on the Peak of Eloquence. He first undertook the position as clerk in the Court Formalities Office. In 629/1231-2, he was appointed as clerk in treasury, and after a while, took up his new post as clerk in the secretariat. In Safar of 642/June-August of 1244 was delegated to supervise Hillah, then he became khwahij (someone who was responsible for educating and training the King's children) of Emir 'Ala' al-Din al-Tabbars, and after that, he became the supervisor of the al-'Azudi Hospital, and finally, supervisor of the Baghdad libraries.

When Holaku Khan attacked Baghdad in 655/1257-8, Ibn Abi l-Hadid was sentenced to capital punishment, but Ibn al-'Alqami and Khwajih Nasir al-Din al-Tusi mediated and he survived, but after a while, he passed away in Baghdad.

He was taught firs in his birthplace, al-Mada'in. There he learned all the Kalam schools and found himself inclined to Mu'tazila school. Then he went to Baghdad and learned a lot form masters. In Baghdad, he was taught and gained knowledge by the great scholars and masters who were mostly Shafi'i and participated in scholarly and literary assemblies. According to Ziya' al-Din Yusuf b. Yahya al-Husayni al-San'ani, author of the Nasmat al-sahar, he became Jahizian Mu'tazili. He learned moral codes from Abu l-Baqa' al-'Ukbari and Abu l-Khayr Musaddiq b. Shabib al-Wasiti.

He had a nice poetic gift and composed poems on different themes, but his liturgy and mystical poems are more celebrated. He had a considerable knowledge of early history of Islam. Al-'Allamah al-Hilli (d. 726/1325) narrated from his father, and his father narrated from Ibn Abi l-Hadid.

He was Mu'tazili in Usul al-Din, and was Shafi'i in Furu' al-Din. It is said that his denomination was in the middle of the Sunni and Shi'a. According to Sharh Nahj al-balagha, he explicitly shows his concurrence with al-Jahiz, and that is why he is regarded as Jahizian mu'tazili. Ibn Kathir believed that he was ghali (someone who exaggerates) Shi'i, but analysis of Sharh Nahj al-balagha demonstrates that it is not the case and in fact, we can think of him as a moderate Mu'tazili. In the beginning of his book, he states that all the Mu'tazili authorities hold that giving bay'a to Abu Bakr was religiously right, and specifies that there is no hukm from the Prophet (s) that this bay'a is right, and it is so because people chose him to be the Caliph.

Opinion about Imam 'Ali (a)

Ibn Abi l-Hadid states about those who wage the Battle of Jamal against Imam Ali (a): We all Mu'tazili believe that these are all annihilated, except Aisha, Talha and al-Zubayr, because these three repented of their sin, and if they did not so, they were infernal because they insisted on rebelling.

He wrote about the army of Syria which participated in the Battle of Siffin: We all Mu'tazili believe that they are all annihilated, whether their heads or their followers, because they insisted on rebelling and died of this.

He also writes about Khawarij: We all Mu'tazili absolutely agree that they are infernal.

As a general rule, our followers believe that any fasiq who dies, is infernal, and there is no doubt that anyone who rebels against true Imam is fasiq. 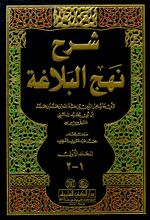 It is said that Ibn Abi l-Hadid wrote almost 15 books. The following are the most well-known:

Al-'Ayniyya, a qasida which he composed to eulogize Imam Ali (a), is one of these seven qasidas and is written with gold in the margin of the Imam's (a) darih.

The less important works of Ibn Abi l-Hadid are:

The material for writing this article is mainly taken from ابن ابی الحدید in Farsi wikishia.