From WikiShia
(Redirected from Ayyub (a))
Jump to: navigation, search

The Qur'an does not mention the details of Job's trial, but the Bible and some Muslim traditions report that the people began to distance themselves from Job (a) because of his disease. According to Islamic beliefs, on the other hand, the prophets would never be afflicted with things that repelled people.

Adducing to Quran 38:41, which speaks of Satan's afflicting Job (a) with weariness and chastisement, some people have stated doubted Job's infallibility because the verse indicates that Satan was able to affect him. However, it is said in response that Satan merely affected Job's body and belongings but not his soul, and therefore it does not tarnish his infallibility.

According to the Qur'an, Job (a) was tried by the loss of his children and wealth and was also afflicted with a disease. He remained patient in the face of all the suffering and successfully passed this trial.[10] He regained his health and children.[11] The Qur'an mentions him by such titles as "our servant," "What an excellent servant!" "patient," and "penitent".[12]

According to a hadith of Imam al-Sadiq (a), God had blessed Job (a), and Job (a) would always give thanks for his blessings. But Satan said to God, "If You take away Your blessings from Job (a), he will cease to give thanks." Thus, God allowed Satan to afflict Job (a) in his wealth and children. Job (a) lost his wealth and children, but he continued to give thanks, even more than before. Then, he lost his crops and cattle, but he remained thankful to God. Afterwards, Satan breathed onto Job's body, creating many wounds on it. Worms and infection began to appear on Job's body to the extent that the people banished him from the village because of his repulsive smell. But Job (a) still remained thankful. Then, one day Satan together with some of Job's companions visited him and told him that his affliction must have been because of a sin that he had committed. In response, Job (a) stated that he had never eaten any food except that he shared it with an orphan or a weak person, and that he had never had the choice between two acts of worship except that he chose the more difficult act. Finally, God sent an angel, who washed Job (a) with the water of a spring that welled up when Job (a) stamped his foot on the ground and thus he was healed.[14]

Job's affliction is considered God's test for him. According to some commentators, Job (a) maintained his gratefulness to God prior to, during,[23] and after the trial. According to a hadith, Job (a) was afflicted so that the people do not consider him divine because of the blessings that were given to him, and also in order not to despise weak, poor, or sick people and to know that it is God who afflicts whomever He wants and heals whomever He wills.[24]

Some commentators have mentioned that the verse "And remember Our servant Job [in the Qur'an]. When he called out to his Lord, 'The devil has visited on me hardship and torment'[33] indicates that Job (a) was not infallible because it states that Satan was able to affect him. In response, it is said that Satan could only affect Job's body, wealth, and children, not his soul, and this does not negate his infallibility.[34] 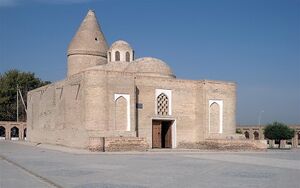 An alleged burial place of Job (a) in Bukhara, Uzbekistan

Job (a) lived in a region called Aws in the south-west of the Dead See and the north of the Gulf of Aqaba, or in Batanea (al-Bathaniyya in Arabic) between Damascus and Adhri'at.[36] There is also a cave in Şanlıurfa, Turkey, which is allegedly the place were Job (a) resided during his illness.[37]

The story of Job is reflected in the works of art. The movie Job the Prophet directed by Farajollah Salahshoor was produced in 1993 and broadcasted on Iranian national television, depicting the life and trial of Job (a).[46]