The Conquest of al-Qādisīyya or the Battle of al-Qādisīyya was a battle between an army of Muslims led by Sa'd b. Abi Waqqas and an army of Sassanid government led by Rostam Farrokhzad. This battle took place in 14/635 and led to the breakdown of Sassanian government and provided the grounds for destruction of Sassanian dynasty. This battle lasted four days. There are many different views in historical sources about the number of soldiers of the two armies, ranging between twenty thousand soldiers up to 120 thousand soldiers. At first, Umar b. al-Khattab, the Second Caliph, called himself the commander-in-chief of the Muslims' army in the battle, but then due to the advice of Imam Ali (a), stayed in Medina. 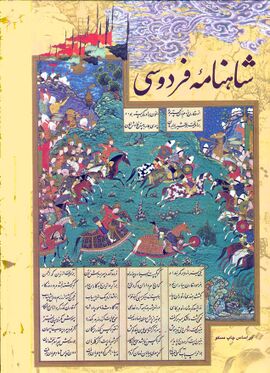 The battle of al-Qadisiyya, also called the Conquest of al-Qadisiyya due to the victory of Muslims, took place between the army of Muslims and the Sassanid government from seventh until tenth of Ramadan, 14/ 25-28 of October, 635. Sa'd b. Abi Waqqas was the commander-in-chief of Muslim forces and Rostam Farrokhzad was the commander-in-chief of the Sassanid army. Al-Qadisiyya was the place where this battle took place, fifteen farsakhs away from Kufa.

Leadership of the Caliph and Objection of Imam Ali (a)

At first, Umar b. al-Khattab, the Second Caliph decided to lead the army of Islam; but, Imam Ali (a) opposed it and argued,

"Avoid battle, because if you leave this place the Arabs will attack you from all sides and directions till the unguarded places left behind by you will become more important than those before you. If the Persians see you tomorrow they will say, ‘He is the root (chief) of Arabia. If we do away with him we will be in peace.’ In this way this will heighten their eagerness against you and their keenness to aim at you."

Yazdegerd, the young king of Iran appointed Rostam Farrokhzad as the commander-in-chief of his army and decided to fight with Arabs. Some sources considered Rostam a Christian. Rostam believed that the whole army should not go to war all at once, but they should go to war group by group, but Yazdegerd did not accept.

Zarrinkoub, the contemporary researcher described Rostam's lack of faith at the beginning of the war as, "Rostam considered the war with Arabs fruitless and maybe dangerous. He thought that Arabs themselves would inevitably come to them due to hunger and lack of means. He thought that if war happened and the result were not be as desired, weakness and chaos would reveal in the government."

Historical sources have reported some of their conversations:

Mughayra said, "We know what you said about your kingdom, wealth and power upon other nations and your great position. Now, I inform you about our present time. We had a bad life; the powerful among us destroyed the weak, we killed our children and worshiped idols. Then, God chose a prophet for us. The Prophet (s) invited us to monotheism and following the book of God and we believed and acknowledged him. He (s) ordered us to invite people to what God has ordered. If they accept, they will have what we have, and if they refuse, we ask them to pay jiziya and if they refuse to pay that, we fight them. We will treat you the same."

After about four months passed, the two armies decided to fight. Sa'd did not go to the battlefield due to being ill and led the army from a distance and appointed Khalid b. 'Arafta as his deputy in the battlefield. The battle of al-Qadisiyya lasted four days, each of which was called with a name: Armath, Aghwath, 'Amas and (Laylat al-Harir) al-Qadisiyya. On the fourth day, a great wind was blowing at the Iranian army, Rostam was killed and the Iranian army was defeated.

Number of the Soldiers

The battle of al-Qadisiyya is very important because it was a beginning for conquering Iran by Muslims and the end of one of the greatest sovereignties in Iran in military and political aspects and also a beginning to the end of Zoroastrian dominance.

The battle of al-Qadisiyya ended by the victory of Muslims and the bitter defeat of Iranians; but, its details have always been discussed and reviewed. Many Arab and Persian researchers and others have looked at this issue in a biased way, and even historians of the past who were mostly Arab made many exaggerations about it.

In this battle, the flag of Iran called "Derafsh Kaviani" decorated by many jewels was taken by Muslims.