From WikiShia
(Redirected from Habakkuk)
Jump to: navigation, search

He (a) was one of the Prophets of Israelites[1] and his book named as his name is a part of the Old Testament. Habakkuk (a) is a Hebrew word, for which different meanings have been mentioned, including "the one who embraces", "a fragrant plant" and "a person who struggles" (referring to his spiritual struggle with God).[2]

There is not accurate information about his life and there is no mention of his name in any part of the Old Testament except in his book. According to the prophecy of the invasion of Caledonians in his book, it can be inferred that his prophethood was almost concurrent with the fall of the capital of Assyrians and the victory of Babylonians led by Nebuchadnezzar in 612 BC.[3] According to some recent researchers, he lived during the rule of Yehoyakim (609 – 598 BC) or a little before it, toward the end of the rule of Yoshia (639 – 609 BC).

Some stories have been made about Habakkuk (a), especially based on the lexical meaning of his name, which seem to be myths rather than being historical reports, including the story of "Bel and the Dragon" which is about his service to Prophet Daniel (a) in the lions' den. Also, there are reports about him being among the captives of Israelites taken to Babylon and his coming to Iran, but it is said that those reports do not have historical bases.

The name of Habakkuk (a) and mentions of his book can be found in some hadiths and exegetical texts. His name in these sources has been mostly mentioned as Hayaquq and Hayquq. His mention in Islamic texts is mostly because his sayings in the third chapter of his book have been considered good news about the coming of the Prophet (s) of Islam. According to a hadith al-Shaykh al-Saduq quoted,[4] in a debate Imam al-Rida (a) had with the Jew Ra's al-Jalut, Imam (a) brought evidence from Habakkuk's (a) prophecy and Ra's al-Jalut accepted. In some Shi'a theological references too, without mentioning this hadith, some sentences are mentioned from Habakkuk's (a) book which has some differences with the ones mentioned in the hadith.[5] Also, the name of Habakkuk (a) is mentioned in Umm Dawud supplication, which is advised to be recited on Rajab 15th.[6]

The book of Habakkuk (a) is the thirty fifth book of the Old Testament, the eighth of the books of twelve minor prophets of Israelites and among brief books of the Old Testament. This book has three chapters and its content can be divided into five parts. In the first and second chapters of this book which include its first four parts, it is mentioned that Habakkuk (a) complained about the oppression and injustice among the Jews before God and God answered to him by giving him the good news that Babylonians would take them (the Jews) captive. Then, Habakkuk (a) asked God, how Babylonians would defeat Jews who were juster than them and take them captive. God answered him that the victory and triumph of Babylonians would be transient and they would perish and only just and faithful people among them will remain to live. The fifth part (third chapter) which is a summary and conclusion of the sayings of Habakkuk (a) in the two previous chapters is a rhythmic supplication.[10] A commentary on the first two chapters of this book has been discovered in the scrolls of the Dead Sea.[11] Some of the teachings of this book have been influential on the great leaders of Christianity such as Paul the Apostle, St. Augustine and Martin Luther.[12] 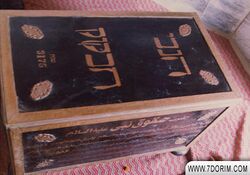 Perhaps, the building of his tomb was among the buildings of the seventh/thirteenth century and sixth/twelfth century and belonged to the time of Seljuks.[15] In sources, the view of this building and description of its architecture, especially its conical rooftop which is an example of old Iranian architectures has been described in detail and some information about the internal condition of the tomb has been found. The tomb of Habakkuk (a) is respected and revered by Jews and Muslims and the people of the region mention many stories about his acts of wonder.[16]