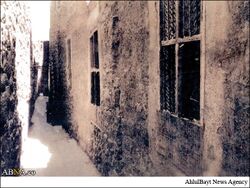 Banū Hāshim District (Arabic: حي بني هاشم) was a district in Medina where Banu Hashim resided. The houses of the Prophet Muhammad (s), Imam 'Ali (a), and Fatima al-Zahra (a) as well as the houses of Imam al-Sajjad (a) and Imam al-Sadiq (a) were located in this district. The district and its alleys are mentioned in mourning ceremonies of the Shi'as for Fatima al-Zahra (a) because of the events in the district which led to her martyrdom. Some relics of the district were still there until 1985 when it was completely destroyed by the Wahhabi government.

During different expansions of Masjid al-Nabi (the Mosque of the Prophet) in different Islamic periods, parts of the historical structure of Medina were destroyed and added to the area of the mosque. One of the earliest changes made in the District of Banu Hashim happened in 91/709 when the mosque was expanded, at the command of Walid b. 'Abd al-Malik, the Umayyad caliph, on its eastern side where the Prophet's (s) chambers were located. He ordered that a wall be constructed around the Prophet's (s) grave and the mosque be expanded on that side as well. When the people of Medina heard about the destructions, they started to moan and cry. At that time, Fatima's (a) house was resided by Fatima al-Sughra, the daughter of Imam al-Husayn (a). People protested because they wanted to preserve the relics of the Prophet (s) so that future generations know about his simple life. Sa'id b. Musayyib said: "I wish the houses remained as they were so that visitors of Medina saw how parsimonious the Prophet (s) was, and how he instructed people to avoid gathering money and adopt asceticism instead."[7]

The last expansion of Masjid al-Nabi which led to the complete destruction of the houses in the District of Banu Hashim occurred between 1985 and 1987. Before the latest destruction, the houses of Imam al-Sajjad (a) and Imam al-Sadiq (a) were well-known among people.[8]

The Event of the Alley of Banu Hashim

In his book, al-Ikhtisas, al-Shaykh al-Mufid cited a hadith from Imam al-Sadiq (a) about the usurpation of Fadak according to which, after the debate between Abu Bakr and Fatima (a), Fatima (a) went to Abu Bakr again and Abu Bakr wrote a letter to the effect that Fadak should be returned to her. When Fatima (a) left, 'Umar b. Khattab saw her in the alley and when she refused to return the letter back to him, he beat her, seized the letter by force, and tore it apart. After this, Fatima (a) had to stay in bed and was martyred after 75 days.[9]

In recent years, during the anniversaries of Fatima's (a) martyrdom, maquettes of the District of Banu Hashim and the House of Fatima al-Zahra (a) are built in some cities, especially in Qom and Tehran, and they are visited by people.