Sayyid 'Abd al-Razzāq b. Muḥammad al-Mūsawī al-Muqarram (Arabic: سید عبدالرّزاق بن محمد موسوی مُقَرَّم, b. 1316/1898-d. 1391/1971), known as al-Muqarram, was a Shiite scholar in 14th/20th century. He is known for his books concerning the lives of Ahl al-Bayt (a). His best-known book is Maqtal al-Muqarram, which has been translated into Persian and was frequently reprinted.

The Family of al-Muqarram was a family of scholars, whose lineage goes back to Imam al-Kazim (a).

Al-Muqarram mastered the discipline of genealogies. He wrote commentaries on some genealogical books. Moreover, he was familiar with poetry.

There were many religious scholars in the Family of al-Muqarram. His father, al-Sayyid Muhammad b. al-Sayyid 'Abbas, spent most of his time for i'tikaf or stay in the Mosque of Kufa and served as an Imam of Congregational Prayers there. His mother, who was also one of sadat, was a reciter of the Qur'an. His paternal uncle, al-Sayyid Mahdi b. al-Sayyid 'Abbas, moved back and forth different places, because of his relatives in Numaniyah, al-Diwaniyah, India, and other places. He was an enemy of Ottomans, and reprehended them for their persecutions and injustices, until he was arrested by Ottomans in Kut (in Iraq), and was hanged in 1334/1915.

Al-Sayyid 'Abd al-Razzaq’s maternal grandfather, al-Sayyid al-Husayn (d. 1334/1915), was an Imam of Congregational Prayers, and taught seminary courses. Al-Sayyid Ahmad had 4 children, the best-known of whom was al-Sayyid Ibrahim b. al-Sayyid Ahmad, who passed away in 1358. He was an expert in jurisprudence, and taught for a long time in the Seminary of al-Shaykh Muhammad Husayn Kashif al-Ghita'.

An outstanding characteristic of al-Muqarram was his love for Ahl al-Bayt (a)—the Household of the Prophet of Islam (s)—as evidenced by his writings. Since al-Muqarram witnessed rawda assemblies in the house of his grandfather, al-Sayyid al-Husayn, he always held such assemblies in his house, where he elaborated the manners, lives, and characteristics of the Imams for people.

Al-Muqarram went through remarkable hardships in his life, and because of his self-esteem, he rested content with the least necessary possessions, and never pursued wealth. His sole pleasure was to teach sciences of Ahl al-Bayt (a), stay in mosques (i'tikaf), and worship God.

Although al-Muqarram was famous in his own time and was offered by his contemporary Shiite authorities to serve as their delegates in other cities, which could change his life financially, he never accepted these offers. He rejected them by saying: “if one obtains welfare and comfort, then the self does not quit its desires and may well lead one to other things.”

One example of his political activities was his accompaniment of scholars in Najaf in their protest to the Pahlavi government after the event of Faydiyya in Qom and the injury of some seminary students.

Al-Muqarram believed that in order to serve Ahl al-Bayt (a) one should not rest content with delivering speeches. One should, furthermore, write and publish their words, biographies, and virtues and disseminate their lifestyles and sciences in the society. Thus, whereas the majority of seminary scholars of the time were eager to publish about jurisprudence and its principles, he devoted most of his writings to virtues and biographies of the Imams and their companions. Al-Muqarram’s works are divided into three categories: published works, prefaces, and manuscripts.

Al-Muqarram learned from prominent scholars during his life, including: 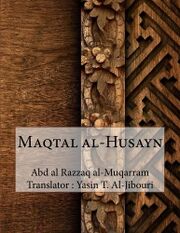 Al-Muqarram wrote nearly 30 books, half of which have been published, and the rest has remained as manuscripts. Almost all of his writings are monographs about Shiite figures and the Imams.

His best-known work is Maqtal al-Husayn concerning Imam al-Husayn (a) and the Event of Karbala.

Al-Muqarram was fond of poetry. In his writings, he frequently cited the poems of lovers of Ahl al-Bayt, to remember these poets. There are few poems composed by al-Muqarram himself concerning Ahl al-Bayt, including the ones about Abu l-Fadl al-'Abbas as well as a poem about the Prophet and his Ahl al-Bayt.