Al-Sayyid Jamāl al-Dīn Aḥmad b. ʿAlī b. al-Ḥusayn al-Ḥasanī al-Ḥusaynī (Arabic: سید جمال الدين أحمد ابن علي ابن الحسین الحسني الحسیني) (b. ~748/1347-8 d. 828/1424-5), known as Ibn ʿInaba (Arabic: ابن عنبه) was a Shi'a historian and genealogist. He was Ibn Mu'ayya's student and lived at the time of al-Shahid al-Awwal. Both Ibn 'Inaba and al-Shahid al-Awwal have quoted from al-'Allama al-Hilli through Ibn Mu'ayya. His most important book is 'Umdat al-talib fi ansab Al Abi Talib. There are disagreements among scholars over his school of thoughts. There is some evidence that he was either a Zaydi or a Twelver Shi'a.

The Reason for Being Called Ibn 'Inaba

He began to learn genealogy from Ibn Mu'ayya (d. 776/1374-5) when he was young and soon became his teacher's companion. Ibn 'Inaba benefited from many books and teachers, but undoubtedly he received the most benefits from Ibn Mu'ayya's works. After Ibn Mu'ayya's demise, he traveled to some cities including Isfahan, Herat, Samarkand, Mecca, and Madhar (in Dasht Mishan) and benefited from many genealogists. He was contemporary with al-Shahid al-Awwal and both of them have quoted from al-'Allamah al-Hilli through Ibn Mu'ayya.

There are disagreements over Ibn 'Inaba's school of thoughts. Some scholars have doubts as to whether he was Shi'a. Apparently this doubt is rootless, although there is no certainty that he was a Twelver Shi'a.

Some scholars believe that he followed Zaydiyya. Some words have been quoted from him which indicate that he was a Zaydi; for example, regarding the Twelfth Imam (a), he says, "He (a) is the Twelfth Imam of the Twelver Shi'a and their Awaited Upriser". More importantly, in the introduction of 'Umda al-Talib Taymuri’’ where he describes the attributes of Tamerlane as, "possessor of great virtues and prophetic inspirations, and honest eloquence, and prudent invincibility, and shining countenance, and 'Ali-like campaigns,…"

Some other scholars believe that it is more likely that he was a Twelver Shi'a; because he was the student and son-in-law of Ibn Mu'ayya who was Shi'a. Also Ibn 'Inaba was Ibn Mu'ayya's companion in the first part of his life and benefited from his knowledge and was constantly loyal to him. 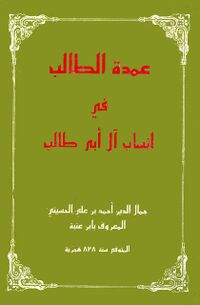 'Umdat al-Talib; the most important work of Ibn 'Inaba

All the works attributed to Ibn 'Inaba are in the field of genealogy and are of great value and authenticity.

'Umdat al-talib is the most important work of Ibn 'Inaba. He wrote this book in three versions. The early version, which is unabridged but disorganized, is known as 'Umdat al-talib Taymuri. The second version is known as 'Umda al-Talib Jalali which has been composed in 812/1409-10. The author has selected almost two third of the first version and added a preface. The third version has been composed for Muhammad b. Falah al-Musha'sha'i, the ancestor of the sayyid rulers of Hoveizeh. Ibn 'Inaba completed this version on Safar 10, 827/January 13, 1424.

In the introduction of two first versions, Ibn 'Inaba writes that he authored this book because some people casted doubt on the genealogy of Abu Talib family. In this book, he first introduces the ancestors and descendants of Abu Talib and then, more extensively, introduces the descendants of 'Ali b. Abi Talib (a) through his sons, Hasan (a), Husayn (a), Muhammad al-Hanafiyya, al-'Abbas, and 'Umar al-Atraf.

Al-Fusul al-fakhriyya fi usul al-bariyya is another work of Ibn 'Inaba which is in Farsi and has been published with the efforts of Jalal al-Din Husayni Muhaddith Urmavi in 1346 sh/1967-8, Tehran.

The book is composed of an introduction and 3 chapters. The title of introduction is "the origin of generations". In this book, the lineage of human being from Adam (a) to Nuh (a) (Noah) has been briefly mentioned. The descendants of Noah (a) then have been introduced in more details with clearer classification; and the descendants of children of Noah (a) especially kings of Mesopotamia, Iran, and other places have been mentioned. This genealogical study includes Arab tribes and ancestors of the Prophet (s) and reaches Abu Talib. Finally, children of Abu Talib have been classified according to the method of 'Umdat al-talib Jalali. Ibn 'Inaba has occasionally criticized others' opinions in this book.

He has dedicated the book to Fakhr al-Din Hasan b. Shams al-Din Muhammad, a descendant from Imam Zayn al-'Abidin (a), who was among scholars of Sabzevar.

Other works of Ibn 'Inaba, manuscripts of which are available, include: