Kamāl al-Dīn Mīrzā Abu l-Hudā b. Abu l-Maʿālī Kalbāsī (Arabic: كَمال‌ُالدّین میرزا اَبوالهُدی بن ابوالمعالی كَلباسی) (d. 1356/1937) was among Shi'a scholars of rijal in 14th/20th century. In Najaf, he studied under scholars such as Akhund Khurasani and al-Sayyid Muhammad Kazim al-Yazdi and then returned to Isfahan and began teaching and writing. One of his most important works is Sama' al-maqal fi tahqiq 'ilm al-rijal. Sayyid Shahab al-Din Mar'ashi Najafi is among his students. Some wonders and mystical disclosures are reported about Kalbasi and he has a treatise in this regards. His grave is in Takht Fulad Cemetery of Isfahan.

The date of his birth is not known, but his birth town was Isfahan. His father was Mirza Abu l-Ma'ali Kalbasi and his mother was daughter of Aqa Sayyid Zayn al-'Abidin, son of Sayyid Muhammad Baqir Shafti.

He passed his primary education with his father. After his father passed away, he immigrated to Najaf and participated in the classes of teachers such as Akhund Khurasani, author of Kifaya al-'usul and Sayyid Yazdi, author of 'Urwat al-wuthqa. He then returned to Isfahan and continued his scientific studies, where people referred to him.

Kalbasi passed away in Isfahan on the eve of Tuesday, 27 Rabi' II, 1356/7 July, 1937 and his body was buried beside the grave of his father Mirza Abu l-Ma'ali in Takht Fulad Cemetery of Isfahan.

His father, Mirza Abu al-Ma'ali Kalbasi, was a scholar of fiqh and usul in Isfahan whose works were Risala fi l-istikharat, al-Bisharat fi usul al-fiqh and al-Rasa'il all-rijaliyya. His great grandfather was known as Haji Kalbasi who was among famous scholars and was famous for his godly attributes and moral virtues. His brother was Mirza Jamal al-Din Kalbasi. 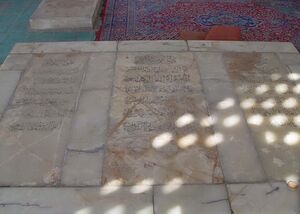 The Reason for Being Titled as Kalbasi

In Tadhkirat al-qubur, Mulla 'Abd al-Karim Gazi briefly mentioned the biography of scholars buried in Isfahan. About the father of Mirza Abu al-Ma'ali, he wrote,

"The father of late Haji Karbasi, was Haji Muhammad Hasan Karbasi who first lived in a neighborhood named Howz Karbas Harat which was also called Karbas neighborhood and thus became famous as Karbasi."

His Teachers and Students

Some of his teachers are:

It is said that while Mirza Abu l-Huda Kalbasi was among important figures of his time in fiqh, usul, kalam, astronomy and rijal; he was also among the rare ones of his time in piety, ascesis, self-purification and purity of soul. He acquired these moral positions under influence of the dispositions and spiritual states of his father, Mulla Ali Muhammad Najafi and Muhammad Jawad Bidabadi. There are some stories about his wonders and mystical disclosures and he also wrote a treatise in spiritual wayfaring. It is reported that about the perfections of Abu l-Huda, Haj Aqa Rahim Arbab said, "These two brothers (Mirza Abu l-Huda and Mirza Jamal) are more similar to angels than humans."