Sayyid Ḥāmid Ḥusayn Mūsavī (سید حامد حسین موسوي; b. 1246/1830 - d. 1306/1888) known as Mīr Ḥāmid Ḥusayn al-Hindī (Arabic: مير حامد حسين الهندي) is among Sayyids and Shi'i scholars of 13th/19th century in India. Hamid Husayn was a researcher and wrote many books to defend Shi'a. He also wrote some works to reject anti-Shi'a books. His most famous book is 'Abaqat al-anwar which he wrote to prove the discipline of imamate and defend the wilaya of Imam 'Ali (a).

Hamid Husayn was born in Muharram 5, 1246/June 26, 1830 in Meerut of Delhi, India. his name was Sayyid Mahdi and his kunya was Abu Zafar. It is said that his father, Sayyid Muhammad Quli Musavi, named him Hamid Husayn after his great-grandfather, Sayyid Hamid Husayn. His lineage reached Imam Musa b. Ja'far (a) from his father's side after 27 generations. His family was men of knowledge. They were originally from Nishapur. One of his forefathers had emigrated to India in the 7th/13th century due to the invasion of Mongols to India and resided in Kantor.

During the rule of Nishapuri kings over some parts of India, a great number of people went there from Nishapur, Mashhad, and other cities of Khorasan and resided in Lucknow, the capital of their government. Almost all religious and political people of this government were from Khorasan. Naqawi Sayyids, who are originally from Nishapur, went to India at the time of the Nawab of Awadh. Mir Hamid Husayn worked under the support of these kings.

He studied Manahij al-tadqiq under its writer, Sayyid al-'Ulama', and wrote marginal notes on it. After some educational years, he began his research. He first corrected and reviewed the works of his father including Futuhat Haydariyya, Risalat al-taqiyya and Tashyid al-mata'in and spent a long time for the correction and comparison of the statements of these books with principal books and sources.

After Mawlawi Haydar 'Ali Fayd Abadi wrote Muntaha al-kalam to reject Imamiyya, Hamid Husayn wrote Istiqsa' al-afham to reject this book. Critics believed that Shi'a cannot answer the points mentioned in that book and even the author said, "If all the books of Shi'a are collected from the beginning to the last one of them, they cannot answer my book". On the other hand, great Shi'a scholars of India including Sultan al-'Ulama', Sayyid al-'Ulama', Mufti al-Sayyid Muhammad 'Abbas al-Tustari and other great scholars could not answer it due to the certain situation of the kingdom and other considerations. Therefore, the answer of Hamid Husayn was praised.

Hamid Husayn then wrote Shawariq al-nusus and later wrote the greatest and most comprehensive defense dictum of Shi'a, 'Abaqat al-anwar and until the end of his life, he was busy with its research and writing.

In 1282/1865-66, he went to hajj and then to the holy shrines in Iraq. There, he took notes from rare books and participated in scientific gatherings of scholars in Iraq, where he was very much respected. After his return, he compiled the result of his scientific work in the form of Asfar al-anwar 'an waqa'i' afdal al-asfar.

Sayyid Hamid Husayn Musavi was a prolific scholar who was knowledgeable about the works, news, and the scientific Islamic heritage. He spent all his life in discussion and research in religious beliefs and defending his beliefs. Due to writing too much, his right hand was paralyzed and toward the end of his life, he had to write with his left hand and even sometimes he dictated and others wrote. It is said that he worked until the last moment of his life and was ill toward the end of his life and could not sit and had to lie down. As he lied down, he put the book on his chest and studied or wrote. They say that the book made callus on his chest.

He extended the library of his father, Sayyid Muhammad Quli Musavi. After his demise, his son, al-Sayyid Nasir further extended the library. al-Sayyid Muhsin al-Amin, the author of A'yan al-Shi'a, reported the number of its books more than 30 thousand manuscripts and print books. Mirza Ahmad Kazimayni mentioned the number of books more than 41 thousand volumes. Today, Nasiriyya library in Lucknow still serves people. 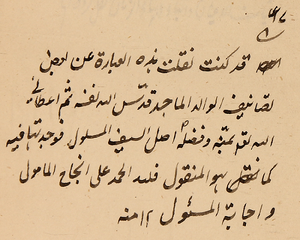 His handwriting, explaining his search for a quotation from a book

Among the family members of Hamid Husayn, other scholars can be seen.

Hamid Husayn had many works on different topics. Some of his books are answers to rejections against Shi'a. He wrote books in theology, jurisprudence, travel logs, poetry, etc. His most famous book is 'Abaqat al-anwar.

On Safar 18, 1306/October 24, 1888, he passed away and was buried in Ghufran Ma'ab Husayniyya. After the news of his demise was spread, many mourning gatherings were held in Iraq for him.

Rijal scholars of Shi'a such as Aqa Buzurg Tehrani, al-Sayyid Muhsin al-Amin and the author of Rayhanat al-adab praised Mir Hamid Husayn. Most praises of him are because of his 'Abaqat al-anwar. In different places in al-Ghadir, Allama Amini spoke about Mir Hamid Husayn and his 'Abaqat al-anwar. In the first volume of al-Ghadir, in chapter "al-Mu'allifun fi hadith al-Ghadir", he praised 'Abaqat al-anwar and its author. About him, Aqa Buzurg Tehrani said, "In recent centuries, I do not know anyone who struggled and endeavored like him in this path; who lost all he had in the path of establishing definite religious truths. History has not seen anyone like him in all lands and ages, in research and writing, in greatness of knowledge, in accuracy and intelligence and in preserving and recording issues."

The material of this article is mainly taken from میر حامد حسین from Farsi Wikishia.