From WikiShia
(Redirected from Yahya)
Jump to: navigation, search

Yahyā b. Zakariyyā (a) (Arabic: یحیی بن زکریا) or John (a) was an Israelite prophet. He became a prophet when he was a child. The story of Yahya's (a) birth, despite his aged father and barren mother, is mentioned in the Qur'an. Yahya (a) was known for his asceticism and his abundant weeping in awe of God. In Shiite traditions, the martyrdom of Imam al-Husayn (a) is likened to Yahya's (a) tragic departure, and the imamate of Imam al-Jawad (a), Imam al-Hadi (a), and Imam al-Mahdi (a) in their childhood is likened to Yahya's (a) prophethood in his childhood.

Mandeans consider themselves the followers of Yahya (a). In the Umayyad Mosque in Damascus, there is a memorial known as Yahya's (a) grave.

Zachariah (a), Yahya's (a) father, was childless until his aging years. One day, when he saw lady Mary (a) and the heavenly blessings that God had bestowed upon her[1], he asked God for a child, "My Lord! Grant me a good offspring from You! Indeed, You hear all supplications".[2] In his prayer, he mentioned his lack of heirs[3] and his fear from his relatives after his death[4]. In response, God promised him that he would have a child named Yahya,[5] even though he was old and his wife was barren. Yahya's (a) mother, Elizabeth, was Mary's aunt,[6] and her miraculous pregnancy was simultaneous with that of Mary (a).[7] Some have said that Yahya—derived from the root h-y-y (to live) (Arabic: ح-ی-ی)— was so named because God took away the barrenness of Elizabeth and somehow "revived" her; others have said that it was because God created him with faith or with prophethood. No one was named so before him.[8]

Yahya (a) became a prophet when he was a child. One of his characteristics was the fact that he was a confirmer of Jesus (a).[9] Yahya (a) followed and promoted the shari'a of Moses (a), but when Jesus (a) became a prophet, he followed him. According to historical sources, Yahya (a) was six months elder than Jesus (a) and was the first person to confirm and believe in Jesus' (a) prophethood. Owing to his piety and chastity, his Jesus's (a) confirmation influenced many people to believe in him.[10]

'Allama Tabataba'i states that "the book" mentioned in the Qur'an [11] that Yahya (a) is ordered to hold on with power is Torah.[12] 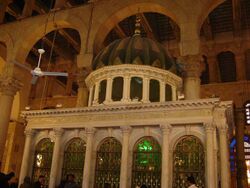 The grave of Yahya (a) in Umayyad Mosque

According to a hadith from Imam al-Sajjad (a), an Israelite king fell in love with one of his mahram relatives and wanted to marry her. Yahya (a) opposed this decision, and his opposition led to the hostility of the girl and her mother towards him. As a result, the girl's mother prompted her daughter to ask for Yahya's (a) head as a condition for the marriage. The Israelite king agreed and beheaded Yahya (a) and sent his head in a golden dish to the girl.[13]

Similarity between Imam al-Husayn (a) and Yahya (a)

Among Yahya's (a) characteristics, five are specifically mentioned: believing in Jesus (a), leadership in knowledge and practice, a righteous prophet, asceticism and nobility.[17] About his asceticism and piety, it is mentioned that he would weep a lot in awe of God and would wear coarse clothes.[18] In this regard, the Prophet (s) is reported to have said, "When Yahya (a) went to Jerusalem in his childhood and saw rabbis putting on woolen shirts worshipping, he also put on coarse clothes and went to the temple to worship God."[19] It is said that whenever Zechariah (a) was preaching and Yahya (a) was among the audience, he would not mention anything about hellfire or Paradise, as it would make Yahya (a) weep a lot.[20] Imam Ali (a) is reported to have said, "Yahya (a) would weep a lot but would not laugh, Jesus (a) would both laugh and weep, and Jesus's manner was better than that of Yahya (a)."[21] According to a hadith, no one should say that he is better than Yahya (a), because Yahya (a) never sinned and never paid attention to any women. However, some scholars have doubted the authenticity of this hadith as it appears to be against the Islamic teachings about the merits of marriage.[22]

Yahya (a) in the Holy Books

Yahya's (a) name appears five times in four chapters of the Qur'an[23]. The story of his birth, the fact that he was gifted judgment's talent in his childhood, and some of his virtues are mentioned in the Qur'an. In Qur'an 19:15, "Peace be to him, the day he was born, and the day he dies, and the day he is raised alive!". Referring to this verse, Imam al-Rida (a) is reported to have said that Yahya (a) will be safe and secure in three stations in which all mankind fear: birth, death, and resurrection.[24]

Yahya (a) in the Gospels

There are several stories about Yahya (a) (or John the Baptist) in the Gospels, which have many common points with the related Qur'anic verses. The story of the glad-tidings of Yahya's (a) birth to Zechariah (a) is mentioned in Luke in details.[25] Later in his life, Yahya (a) became known as the Baptist. He would preach and many people would come from different cities to listen to his sermons.[26] He would speak against hypocrite clerics and other impious figures.[27] However, the most important mission of Yahya (a), as recorded in the Gospels, was affirming Jesus (a) and his mission and baptizing him.[28]

One day, after a debate between a supporter of Jesus (a) and disciples of Yahya (a) about whether Yahya (a) was better or Jesus (a), Yahya's (a) disciples went to him and he told them, "Everyone's obligation is determined by God from heaven. My obligation is to pave the way for people to refer to the Jesus (a). You yourselves are my witnesses that I said explicitly that I am not the Messiah but I have been sent to pave the way for him. In the wedding ceremony, the bride goes to the bridegroom and his friends share their joy and delight with him. I am too, the bridegroom's friend and feel happy for his happiness".[29]

Yahya (a) in Hadiths

According to a hadith, 'Ali b. Asbat narrated that one day he saw Imam al-Jawad (a) [in his childhood] coming to him. Then he looked carefully at the Imam so that he can describe him for his friends in Egypt. Then the Imam (a) prostrated himself and (a) said, "God has argued in the case of imamate as He argued in the case of prophethood saying, 'and We gave him [Yahya (a)] judgement while still a child' (Qur'an 19:12), and said, 'When he comes of age and reaches forty years' (Qur'an 46:15). So it is possible for someone to receive judgment when he is a child, and it is possible for him to receive it when he is forty years old."[30]

The prophethood of Yahya (a) in his childhood is adduced to prove the possibility of reaching the position of imamate in childhood.[31] The monument to Yahya (a) in Umayyad Mosque

Mandeans are Aramaic-speaking people who believe that they follow Yahya (a) and that their scripture belongs to Yahya (a).[32] Their migration to Iran is believed to have taken place at the time of the Parthians. Apart from the Jews, they are one of the earliest non-Aryan immigrants who came to Iran from Palestine. Mandeans are monotheists. They have their own scripture, language, and script. They are mentioned in the Qur'an in several verses.[33]

There is a disagreement as where Yahya (a) was buried in. The most famous place is a grave in the Umayyad Mosque, which is believed to be the place where Yahya's (a) headless body was buried, and it is believed that his head was buried in a mosque located in the Zabdani neighborhood in Damascus. According to some other reports, Yahya's (a) head was buried in the grave located at Nabi Yahya mosque in the Palestinian village Sebastia. Christians also have built a church near this mosque called Church of St. John the Baptist.