From wikishia
(Redirected from Misbah Yazdi)

His teachers include Ayatollah Burujirdi, Imam Khomeini, Allama Tabataba'i and Ayatollah Bahjat. He rejects the possibility of different readings of the religion and believes that the clergy are authorities in the interpretation of the religion. He believes that the Islamic culture is not compatible with the Western culture. Misbah Yazdi has been one of the most important theoreticians and defenders of the theory of Absolute Guardianship of the Islamic Jurist in Iran in the last decades.

Ayatollah Muhammad Taqi Misbah Yazdi was born in Yazd in 1935. After finishing his primary education, he began studying religious sciences in Shafi'iyya Seminary in Yazd under the influence of one of his relatives, Shaykh Ahmad Akhundi[1]. He studied preliminary seminary courses in Yazd. Along with formal seminary courses, he also studied modern sciences, such as physics, chemistry, and physiology, as well as French, with a clergy called Muhaqqiqi Rashti[2].

He then moved to Najaf to continue his seminary studies. However, he returned to Iran after six months because of financial hardships his family was facing[3].

After a while, Muhammad Taqi Misbah Yazdi migrated to Qom and studied al-Makasib in jurisprudence, Kifayat al-usul in principles of jurisprudence, and Sharh-i Manzuma in Philosophy. He then attended advanced lectures of jurisprudence taught by Ayatollah Burujirdi and Imam Khomeini. In this period, he met Allama Muhammad Husayn Tabataba'i and attended his philosophy and ethics lectures. He also attended the lectures of Ayatollah Bahjat for fifteen years[4]. During his education, Ayatollah Muhammad Taqi Misbah Yazdi was friends with some of his classmates such as Muhammad Husayn Bahjati Ardakani, Ali Bahjati, Ali Pahlawani, Mirza Hasan Nuri and Ali Akbar Mas'udi Khumayni[5].

Ayatollah Misbah Yazdi began teaching since when he was a seminary student. Some of his students include:

Political Activities before the Islamic Revolution

Ayatollah Misbah Yazdi was politically active in two periods: from 1963 to 1965, and from 1978 to 1979. His activities include the following: 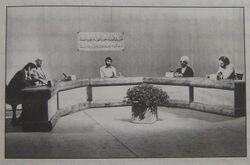 In 1981 when Marxist groups had increased their propagations and cultural activities, Ayatollah Misbah Yazdi participated a debate with Ehsan Tabari, Farrokh Negahdar, and Abdolkarim Soroush. In this debate, Misbah Yazdi and Soroush criticized Marxist views. The debate was broadcast on IRIB TV. Ayatollah Misbah continued to criticize Marxism, which cultivated in writing six volumes under Pasdari az sangarha-yi idi'uluzhik (protecting ideological trenches). The volumes consist of his critiques of Marxist views, the first volume of which was published in 1981 and the other five volumes were published in later years[19].

Maximal Interpretation of the Religion

In Ayatollah Misbah's view, the religion is a comprehensive set of rulings and commands that cover all human needs both in this world and in the afterlife. For him, religious doctrines encompass all individual and social aspects of the human life. The religion, in his view, specifies axiological dimensions of phenomena. That is to say, the function of religion is to evaluate phenomena and instruct people on how to deal with them in order to achieve happiness. However, science explains how phenomena come to exist[21].

Conflict between Islamic and Western Cultures

According to Ayatollah Misbah Yazdi, the Western culture should be fully dismissed as a culture of disbelief and atheism. He rules out any coexistence and compromise with the Western culture, although he believes in the necessity of deploying modern technologies. In his view, humanism, secularism, and liberalism constitute essential elements of the culture of disbelief and atheism, which is contrasted to theism, the centrality of the religion, and the Guardianship of the Muslim Jurist, as well as human activities being constrained by the obligation for obedience of God as essential elements of the Islamic thought. The two cultures are polar opposites: the former invites human beings to absolute freedom from any constraints, and even freedom from obeying God, while the latter invites people to only obey God[22].

Rejection of the Possibility of Different Readings of Religion

In Ayatollah Misbah's view, it is not acceptable to have different readings of the religion, since religious judgments and propositions are obvious, and their understanding does not require scientific interpretations and justifications. Qur'anic verses and hadiths can be understood by anyone who knows Arabic language and literature, and the idea of different readings of religious propositions is an atheistic view. The domain of conclusive religious doctrines is very wide-ranging, and they must be acted upon[23].

Authority of Religious Clergies in Understanding the Religion

According to Ayatollah Misbah, interpretations by Muslim scholars with respect to specialized domains are valid. He concedes that there is ijtihad and disagreement with regard to ancillaries of the religion. However, only the views of religious experts are valid in these areas, rather than the views of those who are not knowledgeable enough. Interpretations of experts in these areas are valid insofar as they are pious in their behaviors, understanding, research, and inferences, and are not affected by personal desires and propagations[24].

Guardianship of the Muslim Jurist

He also emphasizes on the "absolute" or the "unconditional" nature of the Guardianship of the jurist. For one thing, this rules out the limited Guardianship of Jurists in the periods of non-Islamic sultans and governments, and for another, it implies that in an Islamic government, the Jurist has all the authorities of an Infallible. Thus, according to the theory of Absolute Guardianship of the Jurist, the qualified jurist has all the authorities possessed by the Infallible Imam, and all regulations, instructions, and procedures within an Islamic government are legitimate only after the Jurist's endorsement. In this framework, the Jurist Guardian is thought to be appointed by God, and his rule is not considered to be legitimized by people's votes. People can only play a role in the realization of his rule[26].

Thus, the Jurist Guardian has a place above the law. In fact, it is the constitution that derives its validity from the Jurist's endorsement, and not vice versa. People's votes and wants are valid as long as they fit the framework of Islamic values and are endorsed by the Jurist Guardian[27].

Ayatollah Misbah Yazdi's works are concerned with the exegesis of the Qur'an, Islamic philosophy, Islamic beliefs and Theology, ethics, and Islamic political thought[28]. Many of his works are accessible online.