Jump to content
From wikishia
Welcome to
WikiShia
An online encyclopedia of the school of Ahl al-Bayt (a), affiliated with the Ahl al-Bayt World Assembly.
4,220 articles in English.
About WikiShia • Policies and Guidelines • List of Pages

Featured Article
Rajab or Rajab al-Murajjab is the seventh month of the lunar year. Along with Dhu l-Qa'da, Dhu l-Hijja and Muharram, it counts as one of the haram months. According to hadiths, it is recommended to perform 'umra, fast, and worship God in this month.

Prophet Muhammad (s) is cited as saying that "Rajab is God's month, Sha'ban is my month, and Ramadan is my people's month", and that "fasting one day in Rajab is like fasting one month".

The first Thursday night of the Rajab month is called Laylat al-Ragha'ib in which special practices are recommended by hadiths. The tradition of i'tikaf is practiced from 13th through 15th of this month—known as Ayyam al-Bid (the white days).

The most important historical event that took place in Rajab is the bi'that (the first revelation) of the Prophet (s). The other important events that occurred in this month include the birthdays of Imam al-Baqir (a), Imam al-Jawad (a), and Imam 'Ali (a), and the martyrdoms of Imam al-Hadi (a) and Imam al-Kazim (a).

It is supererogatory or recommended to visit the shrines of the Infallibles (a) in this month, especially visiting Imam al-Husayn (a) at the beginning and the middle of the month and visiting Imam al-Rida (a).

The word "Rajab" literally means to honor and respect. Thus the month has been called so because it is honored and respected. According to lexicological sources, Arabs respected this month even before the emergence of Islam and avoided fighting therein.

The Prophet (s) is quoted as saying with respect to the appellation of the month with "Rajab al-Asabb" (the pouring Rajab) and "Rajab al-Asamm" (the mute Rajab):

The Rajab month was particularly respected and honored by Arabs in the period of Jahiliyya; it was forbidden to fight, murder, plunder, and start a camisado in this month, and they were committed to such prohibitions. This is why it was called "Rajab al-Asamm" (the mute Rajab). After the emergence of Islam, the month was yet more respected and deemed sacred. Read more... 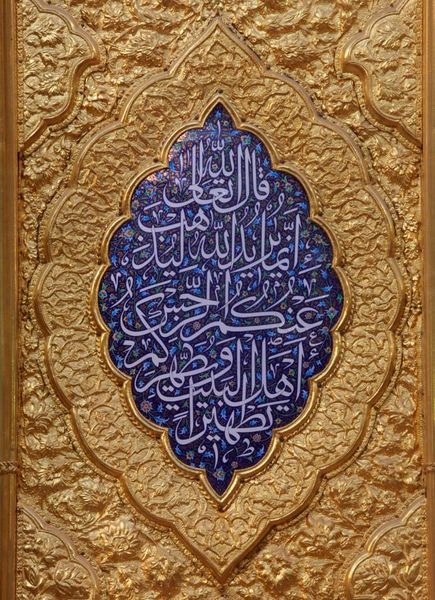 "Al-Tathir verse, written on a door in the Holy Shrine of Imam Ali (a)"