From wikishia
(Redirected from Maqam) 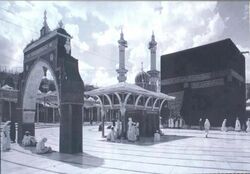 According to historical sources, until the time of the Second Caliph, this stone was on the ground. At his time, a flood, which came to be known as Umm Ashhal, moved this stone a great distance and the caliph built a column for it in its previous place. In the 2nd/8th century, this stone which was broken from several points was glued together using silver and was plated with gold. Later, to protect it more, a dome with four iron windows was built upon it. Until 1967-8, a three by six meters wooden structure existed over Maqam Ibrahim which put pilgrims in trouble when performing tawaf. Saudi government decided to move Maqam Ibrahim to a place near Bab Bani Shayba, but they did not do so due to public objection of Muslim scholars and a golden cylinder was place on it instead. Through the windows around this cylinder, the stone and the footprints which are now silver-plated can be seen. Ibrahim's (a) station is 13 meters away from the Ka'ba. 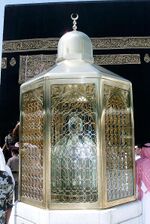