Jurisprudential exegesis (Arabic: التفسير الفقهي) is a branch of tafsir in which the exegete explains and interprets ayat al-ahkam which are the verses that mention the rules about people's actions. Jurisprudential interpretation has a special significance among other branches of the exegesis of the Qur'an; because, the glorious Qur'an is the most important source of legislation of Islamic laws and rulings in the views of all Islamic schools and the authenticity of tradition from which most religious rulings are deduced is itself based on the Qur'an.

Islamic scholars have two views regarding determination of the scope of jurisprudential discussions and the verses of rulings in the Qur'an: most jurists and exegetes consider the scope of the verses of rulings in the Qur'an limited to those verses which mention secondary rules and practical obligations, but some others believe that in addition to them, there are other issues in jurisprudence mentioned in the Qur'an. About the number of such verses too there are different views.

Scope of Jurisprudential Discussions and Verses of Rulings

Regarding determination of jurisprudential discussions and verses of ruling in the Qur'an, there are two views among Islamic scholars:

The majority of jurists and exegetes delimit the scope of verses of ruling in the Qur'an to verses explaining secondary rulings and practical obligations such as purity, prayer, fast, zakat, khums, hajj, jihad, marriage, inheritance, hudud, blood compensations and contracts. To them, verses of ruling in the Qur'an are few and do not exceed 500 verses. It is commonly believed among Islamic scholars that the Qur'an has 500 verses of ruling. Some scholars titled commentaries on the verses of ruling with this number including Tafsir al-khams mi'a aya fi l-ahkam of Muqatil b. Sulayman (d. 150/767) and al-Nihaya fi tafsir khams mi'a aya fi l-ahkam of Ahmad b. Abd Allah mutawwij Bahrani (d. 771/1369) in which "khams mi'a" means 500.

Characteristics of Jurisprudential Discussions and Verses of Ruling

Jurisprudential issues mentioned in the Qur'an and its verses of ruling have some characteristics which make them different from hadiths and common jurisprudential texts, some of such differences are as follows:

After the noble Prophet (s), the Ahl al-Bayt (a) too interpreted jurisprudential verses of the Qur'an. The same as the Prophet's (s) interpretation, this interpretation has two forms:

The Companions and the Followers

Sometimes, the Companions of the Prophet (s) interpreted the jurisprudential verses of the Qur'an. Some of the Companions such as Ibn Abbas, Ibn Mas'ud, Ubayy b. Ka'b and Zayd b. Thabit had a more significant role in this regard.

After the age of the Followers, interpretation of the jurisprudential verses of the Qur'an by the followers of the Followers and others continued with the same approach until jurisprudential commentaries were compiled in 2nd/8th and 3rd/9th centuries. Exegetes do not have the same opinion about the first writer of a jurisprudential commentary. Regarding the first person who wrote about the jurisprudential verses, in al-Awa'il, al-Suyuti considered al-Shafi'i (d. 204/820) and in Tabaqat al-nuhat, al-Qasim b. Asbagh al-Qurtubi (d. 203/819) is mentioned as the first author; but, according to Ibn al-Nadim in al-Fihrist and some others, the first exegete was Muhammad b. Sa'ib al-Kalbi al-Kufi (d. 146/764) among the companions of Imam al-Baqir (a) and Imam al-Sadiq (a). After him, Muqatil b. Sulayman (d. 156/773) wrote the commentary Khams mi'a aya fi l-ahkam. Then gradually, some brief and comprehensive commentaries with different religious tendencies were written, some of which are not available to us now.

Some jurisprudential commentaries of Shi'a are as below: 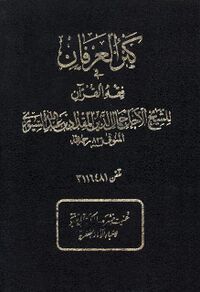 Hanafis too have written several commentaries on jurisprudential verses, the most famous ones of which are:

Shafi'is too have written several jurisprudential commentaries, some of which are:

Maliki jurists too have written some jurisprudential commentaries, the oldest of which are as below:

Islamic jurists have usually used two methods in interpretation of jurisprudential verses of the Qur'an and the commentaries they have written on this topic:

Regarding the method of entering the discussion and the order of organizing discussions under certain titles and chapters:

Regarding this issue, Shi'a and Sunni exegetes have adopted two different methods:

Regarding comprehensiveness or exclusiveness:

In this regard as well, Shia and Sunni jurists have adopted two different methods:

Validity of the Apparent Text of the Qur'an

Legislative Nature of the Qur'an

The Qur'an mentions some issues briefly and in general; but, in some verse, God has assigned the duty of explaining and interpreting the Qur'an to the Prophet (s) (Qur'an 16:44) and ordered Muslims to ask from the People of the Reminder and knowledgeable ones (Qur'an 16:43) and based on some hadiths, the People of Reminder refers to the Ahl al-Bayt (a) of the Prophet (s). In several cases, the noble Prophet (s) interpreted jurisprudential verses, thus, an exegete should refer to them and interpret verses of the Qur'an according to them. The requirement for benefiting from the tradition in interpreting jurisprudential verses is the power to distinguish the true conducts from false ones; therefore, an exegete should have sufficient knowledge about the principles of the tradition the same as diraya and rijal.

Knowing these sciences has a substantial influence on deduction of religious rules and a great amount of jurisprudential conflicts among different schools comes from this basis; for example, some Sunni jurists have considered "bi" in verse Qur'an 5:6 "bi-ru'usikum" to have a joining function and thus, they have ruled in wudu that all the head should be wiped; but, in hadiths of Imamiyya, it is meant to suggest a part and thus, wiping a part of the head is considered sufficient.

Many verses of the Qur'an are revealed about certain issues or events without considering which, deducing rulings from the verses is difficult and the interpreter may interpret opposite to the original intention of the Legislator of religion. For example, from the expression of "fala junah" ("there is no sin"), it can be deduced that performing sa'y between Safa and Marwa is not obligatory, which is against the intention of the Legislator of religion, and in hadiths regarding the occasion of its revelation, it is mentioned that this expression was revealed because Muslims avoided to perform sa'y between Safa and Marwa due to existence of the polytheists' idols between the two mountains.

The Abrogating and the Abrogated

Knowing abrogating and abrogated verses has a great role in deduction and interpretation of jurisprudential rules; especially, if the abrogated issue is basically the religious ruling. The importance of this knowledge is that regarding the abrogating verses in the Qur'an, if the jurist knows them, he would not give jurisprudential rulings based on such verses; as for example, most jurists consider verse 15 of Qur'an 4 abrogated.