From wikishia
(Redirected from Qur'an 4)

This article is an introduction to the Sura al-Nisa; to read its text see text:Sura al-Nisa. 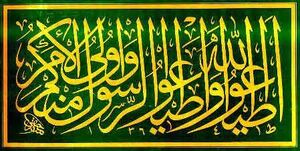