From wikishia
(Redirected from Sa'id b. Jubayr al-Asadi)

Sa'īd b. Jubayr b. Hishām al-Asadī al-Wālibī (Arabic:سعید بن جبیر بن هشام الاسدي الوالبی) was one of the Tabi'un and a companion of Imam al-Sajjad (a). He learned Islamic sciences and Quranic exegesis from Ibn Abbas and became one of the greatest exegetes of his time. He was present in Abd al-Rahman b. Muhammad b. al-Ash'ath's uprising against al-Hajjaj b. Yusuf, and after the defeat of the uprising, he escaped to Isfahan and Qom. He lived in these cities for a while until he was arrested in one of his trips to Mecca and was martyred by al-Hajjaj b. Yusuf command in 95/714.

Sa'id b. Jubayr b. Hisham al-Asadi al-Walibi was born[1] in Kufa in 45/665-6.[2] He was originally from Abyssinia and was an emancipated slave of Banu Asad.[3] There is no precise information about his parents. The only information is that his father, Jubayr, was originally from Abyssinia and lived with Banu Wabilat b. Harith from the Banu Asad tribe as a slave.[4] After the emergence of Islam and his conversion to Islam, he was emancipated.[5] On some accounts, Jubayr was a companion of Imam Ali (a).[6]

Some scholars, such as al-Shaykh al-Tusi,[7] believe that Sa'id's teknonym was "Abu Muhammad",[8] and on other accounts, it was "Abu Abd Allah". Tustari rejects al-Shaykh al-Tusi's account,[9] and the majority of biographers believe that his teknonym was "Abu Abd Allah".[10].[11].[12] His title was "Walibi"[13].[14].[15] because his father originally lived under the protection of Banu Waliba. He was referred to by some authors as "al-Faqih al-Bakka'" (the weeper jurist).[16]

It is made explicit in Khulasat al-aqwal by al-Allama al-Hilli and Rijal al-Kashshi that Sa'id was a Shi'a of Imam Ali (a), and this was the reason why he was martyred by al-Hajjaj.[22]

Al-Kashshi says that Sa'id b. Jubayr was on the right path, following Imam al-Sajjad (a). He was praised by the Imam (a), and because of his close relationship with the Imam (a), he was martyred by al-Hajjaj.[23]

Fadl b. Shadhan was quoted as saying that early in the period of the Imamate of Imam al-Sajjad (a), the Imam (a) had only five close companions: Sa'id b. Jubayr, Sa'id b. Musayyib, Muhammad b. Jubayr b. Mut'im, Yahya b. Umm al-Tawil, and Abu Khalid al-Kabuli.[24]

According to al-Shaykh al-Tusi, Sa'id b. Jubayr had particular respect for Imam al-Sajjad (a).[25]

Sa'id b. Jubayr was a student of Ibn Abbas.[26] When people of Kufa asked questions from Ibn Abbas, he told them, "Why do you ask me while Sa'id is among you?"[27] Sa'id was so knowledgeable that Ahmad b. Hanbal said, "There is no one on Earth who does not need Sa'id's knowledge."[28]

Sa'id counts as a student and companion of Imam al-Sajjad (a) as well.[29]

Ibn Kathir characterizes him as an Imam (a leading Islamic figure) in Quranic exegesis, jurisprudence, and other sciences, saying that he did many good deeds.[30] Al-Dhahabi also referred to him as an Imam.[31]

Sufyan al-Thuri quotes Amr b. Maymun who quotes his father as saying that Sa'id b. Jubayr died while everyone on Earth needed his knowledge.[32] Sa'id himself says, "What I possess is my knowledge; I wish people learned it from me."[33] He was described by Ash'ath b. Ishaq as "jihbadh"[34] (a great scholar).[35] Ibrahim al-Nakha'i said, "After Sa'id, nobody emerged who was his counterpart in knowledge."[36] Abd Allah b. Umar was asked a question about inheritance. He said, "Ask Sa'id b. Jubayr; he is more knowledgeable than me on these issues."[37] In these quotes, "knowledge" apparently refers to religious knowledge.

Sa'id wrote a book concerning Quranic exegesis which was cited by exegetes, such as al-Suyuti. He is characterized by Qutada as the most knowledgeable exegete among Tabi'un. His exegesis is mentioned by Ibn al-Nadim in his al-Fihrist under Shiite exegeses,[38] without mentioning any other exegesis that is temporally prior to it. His exegesis was also mentioned by Aqa Buzurg Tihrani in his al-Dhari'a.[39]

A conclusive piece of evidence for the existence of this exegesis is the account on which Sa'id was asked by Abd al-Malik b. Marwan to write an exegesis, and he agrees and writes it.[40] Sa'id's exegesis is referred to by some people as the first exegesis of the Qur'an.[41]

Al-Isfahani quotes Qasim b. Ayyub as saying about Sa'id's vigilance (tahajjud) and weeping for the sake of God that he wept so much that he fainted.[43] Whenever he said prayers, he stood still like a stick and wept a lot.[44]

It is said that, during his sojourn in Isfahan, Sa'id visited Ka'ba two times a year: one time for hajj and another time for umra.[45] Someone said, "I saw Sa'id b. Jubayr circumambulating around the Ka'ba slowly and solemnly."[46]

When Sa'id was arrested by Khalid b. Abd Allah al-Qisri, he was still circumambulating around the Ka'ba while his arms and legs were tied with chains.[47]

Recitation of the Qur'an

However, Ibn Sa'id only says that he recited the Qur'an between Maghrib and Isha' Prayers without talking about the recitation of the whole of the Qur'an.[52] Sa'id b. Jubayr himself is quoted as saying,

"After the murder of Imam al-Husayn (a), I recite the whole Qur'an every couple of nights, unless I am on a trip or ailed."[53]

Uprising against Al-Hajjaj and Demise

Sa'id b. Jubayr was present in Abd al-Rahman b. Muhammad b. al-Ash'ath in an uprising against al-Hajjaj b. Yusuf al-Thaqafi.[54] He encouraged their forces by saying, "Fight with them and kill them because they do injustice in their government and have exited the religion and are being brutal towards people and have wiped off the prayer and humiliated Muslims."[55] The battle is known as Dayr al-Jamajim.

After ibn Ash'ath's defeat, Sa'id fled to Isfahan[56] and then to Qom.[57] He secretly lived in Isfahan for twelve years,[58] during six months of which he went to Qom and hid in the Jamkaran village, where he went to the Banu Asad tribe[59] and Khattab al-Asadi (who had constructed a mosque there).[60]57 During his sojourn in Isfahan, he visited Mecca twice a year.[61] In one of these trips, he was arrested by Khalid b. Abd Allah al-Qisri the ruler of Mecca and was sent to al-Hajjaj. He was murdered at the command of al-Hajjaj.[62] 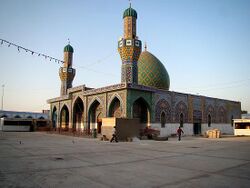 Sa'id's mausoleum is located in al-Hay city in the Wasit Province of Iraq.

The earlier building of Sa'id's mausoleum was constructed in the Safavid period in the eleventh/seventeenth century. In 1959, the building was reconstructed with encouragements of Ayatollah al-Hakim and with the efforts of Shaykh Abd al-Amir al-Najafi Al Manam and residents of the city.

In Iraq, Rabi' al-Awwal 25 of every year is recognized as the anniversary of Sa'id b. Jubayr's martyrdom. On this day people congregate in his mausoleum and honor the day.[68] .[69]

In sources of history and hadiths, there are four other people whose name was "Sa'id b. Jubayr" which should not be confused with Sa'id b. Jubayr b. Hisham al-Walibi. Those four people are: